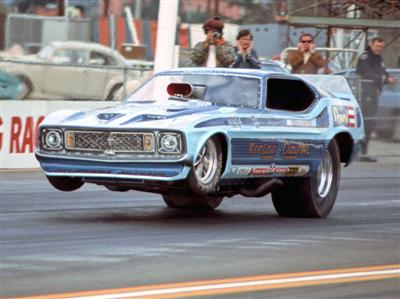 For a team and a stable of cars that only existed for seven years, the love that’s being bestowed on the Keeling & Clayton California Chargers is pretty impressive; I wish John Keeling were still with us to share the glory with Jerry Clayton.

The sheer outpouring of admiration for the show-quality nature of their cars is evident in that everyone seems to have a collection of photos of the various California Chargers, including veteran drag racing photographer Dave Milcarek, who sent me some images as a bonus in response to a photo request from a reader that I’ll talk about in a bit. 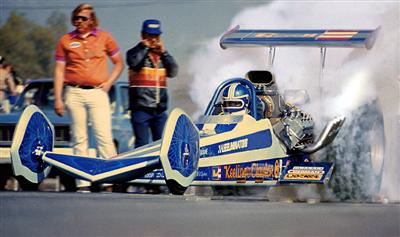 In addition to nice photos of the rear-engine dragster – I really dig the ground-level shot, which is the third in the sequence -- Milcarek has great shots of the popular Mustang Funny Car that followed the initial Pinto and preceded the Trans Am. Milcarek has been shooting drag racing since 1975. You can check out his website here. 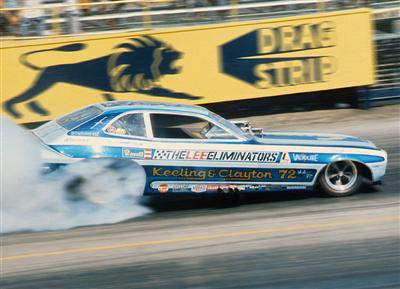 Milcarek’s name entered the conversation after “loyal reader” (I love that!) John Murnan II asked if I could get Milcarek to share photos that he took of the K&C Mustang “when they had what looked like gold all over the motor (and probably other places on the car). I have always wondered if it really was gold, and if so, why they did it (other than to make the car look fantastic, of course). Maybe you could get that info from Mr. Clayton on the whole gold thing on that car (and others of theirs as well?). That might make for some interesting reading, too. Absolutely one of the most gorgeous race cars ever.”

I asked Clayton about the blower, which opened the door for him to address some of the other questions that he has seen here as he has followed along with the last two columns.

“The gold blower was made out of 14-karat gold alloy because the more pure 24-karat gold was too soft to maintain shape when it got hot under high boost pressure. Also, most of the shiny parts on the cars were polished magnesium -- a lot lighter than aluminum -- and took a lot of rag work (even inside of rear wheels), and I believe that the polished blower was coated with maybe Dow 19, which gave it the gold color. Magnesium was routinely coated (aerodited, similar to aluminum anodizing) to control corrosion/oxidation, and if you polished the material first, it would then be shiny.”

He also noted that the linen napkins that Pat Green referenced as high-dollar rags thanks to the airline connection that Keeling and Clayton shared were actually clothes with jeweler’s rouge compound for polishing the blower.

Regarding questions on the whereabouts of the Pinto, Clayton said, “Don Long had made an SFI Spec-approved Funny Car roll cage for a customer in Hawaii, and when we decided to go to the Mustang body to get rid of the aero problems of the Pinto, we cut the frame off just forward of the motor plate and sold the front frame and Pinto body along with interior aluminum to the customer in Hawaii. I don't know who it was, but maybe Don Long knows who/where it’s all at. At that time, NHRA had just changed the chassis rules to allow solid suspended front ends on Funny Cars. We extended the frame [forward] the distance to the nose of the body and mounted our fuel and dry sump tanks up there for better weight toward the front. The axle (still a tube axle) ran across the car behind the tanks -- you can see some of that in those pics.

“The Mustang was sold to some Canadian racers (they liked to come down and buy used stuff to beat extremely high import fees/taxes); however, I was on a layover in Santa Barbara a couple years later and saw it sitting outside on the corner of a gas station, so maybe someone from around there might remember it.

“A note about the national record: It used to be that a record had to be set at a regional points race within a time constraint of maybe one hour or the two final runs at the U.S. Nationals (winner or runner-up). The NHRA tracks on the West Coast were marginal for being able to put down two runs to qualify for a record in the time period; even if you could do the time, you had to get back through the lanes in time to run again, and there were always lots of fuelers in line. We were able to do it at Fremont (sea level), and we had installed a Jim Davis Funny Car-type starter on our car and were able to go through a lane set aside for record-backup runs down by the Stockers, etc. The 6.21 record that Don Garlits set at Indy was thrown out because he had 4 inches of offset in his front end/wheelbase, but instead of leaving us as the record holders, NHRA set a standard of (I think) 6.20 or so.”

On a lighter note, Steve Reyes noticed my inclusion of Tom Ferraro on the list of Funny Car shoes employed by Keeling & Clayton and sent this vintage gem of the K&C Pinto and Ferraro “screwing around” after a magazine photo shoot of the Pinto at a SoCal Jack in the Box restaurant (as an aside, I can’t tell you how many late-night Jack in the Box tacos and onion rings my friends and I devoured after an evening of cruising). Believe it or not, kids, that’s what Jack used to look like before the 21st century marketing suits prettied him (and the restaurants, for that matter) up. Oh, the horror …

Last week, I mentioned that before the historic side-by-side 6.41s run by Rick Ramsey in the California Charger slingshot and Don Prudhomme in the Hot Wheels wedge in the semifinals of the 1971 PDA event at Orange County Int’l Raceway, Gerry Glenn had run two 6.41s himself at Lions a month earlier. Reader Mark Wallace remembers it well. “I believe he broke John Mulligan's long-standing e.t. mark and ran back-to-back .41s to take the win. He was on the cover of Drag News along with myself and two other buddies. Probably the best photo we ever got in, right in the middle, front page of Drag News. I would love to get a copy of that photo. Any suggestions on how? I actually believe we are standing next to Gerry's wife; she was ‘really hot,’ especially when you’re 17 years old. Man, those were the good old days of drag racing: 32-car shows, quarter-mile track, good-looking girls. Awesome.”

I wasn’t able to find the photo in question in our files but did find these two, one of which shows the awesome Schultz & Glenn dragster en route to beating Ramsey in the PDA final, 6.50 to a blower-eating 6.72, and a winner’s circle photo that doesn’t show Wallace or Glenn’s wife but does showcase Linda Vaughn and fellow Hurstette Nikki Phillips. With Glenn, receiving congratulations from PDA promoter Doug Kruse, are Funny Car winner Gene Conway at right and famed Combo winner Don Enriquez at left with Miss PDA Vicki Holloway. Enriquez made some history of his own that night in his Gene Adams-tuned Jr. Fueler, becoming the first of the breed to run in the sixes with passes of 6.98 and 6.99. Interested guests included Chuck “the Rifleman” Connors, who was the grand marshal, and Brandon Cruz, Eddie in the then-popular TV show The Courtship of Eddie’s Father. Now you know. 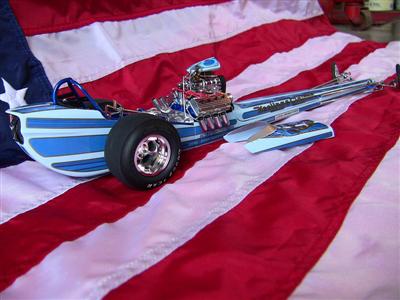 While – as noted last week -- the reconstruction of the California Charger is under way at Long’s shop, someone already has done the job, at least in small scale. I received links and photos from two readers -- David Ryberg and Kevin Bye – raving about the amazing job that Missouri model maker Bill Davis did in re-creating the classic digger in plastic. Clayton had his hand in this one, too, providing many reference photos to Davis, who nailed it, as you can see in the gallery at right.

“The results are pretty spectacular,” commented Bye. “I don't think I have ever seen so many machined parts on a model in my life! Certainly beyond my level of skill and patience!!!! Apparently, he has won a few awards already, and I think there might be a magazine feature.” 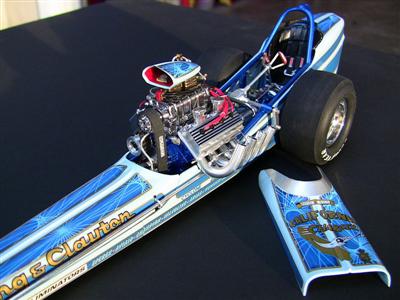 According to posts by Davis on a modeling message board, the project took him a year to complete, and as you can see, the result is stunning, from the detailed cockpit to the intricate paint scheme and everything between.

All right, my friends, that’s it for another trip down Memory Lane. I’ll be back next week with another installment. Thanks, as always, for contributing.