Like a Top Fueler flipping overbackward and returning to earth pointed in the wrong direction, I’m back for part three of the blowover chronicles, beginning with a little historical tidying up before we continue the chronological account of all things topsy-turvy. Thanks to the keen memories, quick shutter fingers, and sheer giddiness of wanting to make me look bad, the Insider Nation has been piling on the “you-forgots” when it comes to dragsters behaving badly.

As a result, I'm going to pick up today's planned chronology continuation in Tuesday's column -- beginning with Pat Dakin's 1998 blowover in Topeka -- and concentrate on taking care of the oversights here. 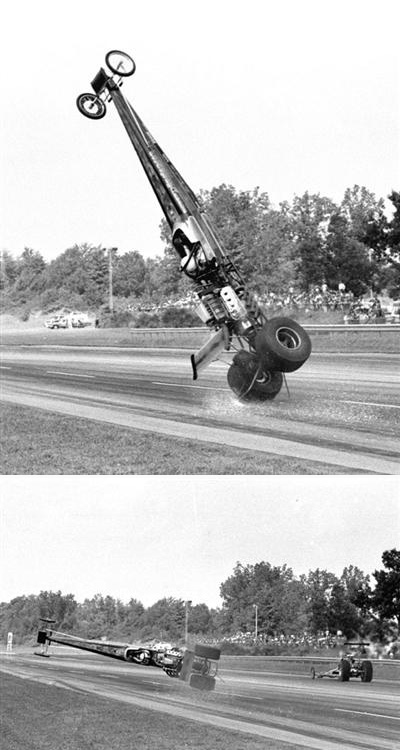 First up, and way back in the chronology, is the photo sequence at right, sent by the perpetually perfectly placed Steve Reyes, who captured 1970 NHRA Top Fuel champ Ronnie Martin’s plight in Robert Anderson's Louisiana-based dragster while racing Carl Olson in round one at the Popular Hot Rodding Championships in Martin, Mich., in 1972.

Just based on the photos, this one seems weird in that the car reaches full vertical, then appears to fall onto its side, unlike most dragsters that ended up facing backward on the track. As you can see in the final photo, the car was heavily damaged, and, according to Olson, Martin did suffer broken bones in the spill.

“I saw his front end starting up out of the corner of my eye, but he disappeared as soon as he got off the throttle,” Olson told me via email this week. “I didn't know he'd had a ‘big-time’ crash until [partner Mike] Kuhl came down to get me in the shutoff area. I don't remember the extent of his injuries. As I recall, he may have had a broken arm or leg, but I couldn't be sure about that.”

In that same vein of doubt, I’ve also decided to change a bit my stance of trying to draw a distinction between what was an overbackward powerstand and what was an air-influenced blowover, so when you see my final box score, it will include both flavors, which will significantly jack up the carnage count. It’s near impossible to determine what was occurring in those milliseconds, so far be it from me to assign blame.

Reyes also reported that he witnessed an overbackward wheelie by Mickey Naylor’s Medicine Man slingshot  at England’s Santa Pod Raceway in 1978. Pete Aughton, my "correspondent" from across the pond, also remembered that incident, and though he didn't have any photos of the wreck, he did have this pic of the car, which had been campaigned on nitro by Dennis Priddle but was running on alcohol in the Pro Comp ranks at the time.

Added Reyes, "The first blowover I ever saw was at Lions, John Collins driving for Dave McKenzie. It was the final round of Top Fuel, and Collins got a single when the other AA/FD lost fire. Collins left the starting line with his right arm and hand waving a 'V' for victory. About 200 feet out, the car went into this huge wheelstand, then kinda turned in the air and came down on the guardrail. The car was history, but Collins was OK. They rebuilt and then crashed at Irwindale, and McKenzie quit."

Reyes also cited Jim Davis, who also flipped a slingshot in Bakersfield in the early 1970s, but, again, no photos are available, though I have read that Auto Imagery's Dave Kommel got his first big photo break with a shot of the Davis accident that ended up running in one of Mike Doherty's wonderful Photo Greats collections in the 1970s. I’m guessing there were more flipped front-motor cars than we’ve reported already.

Insider regular Cliff Morgan remembered, “I went to Pomona in 1963 for a two-out-of-three match race for the No. 1 spot [on the Drag News list], between [Chris Karamesines] and Weekly-Rivero-Fox-Holding. In round two, ‘the Greek’ did a big wheelie at half-track. This was not uncommon, and it was called a powerstand. Remember that AA/FD used to smoke the tires at the start, until around half-track, when the tires finally hooked up. Anyhoo, from what I understand, there were times when the tires hooked too well, and the car did a half-track wheelie. I remember seeing photos of this wheelie that ‘the Greek’ did in one of the drag papers or magazines of the time, so maybe you guys might have a photo of it in the archives. This photo would be a perfect example of a powerstand. I don't think that any powerstands resulted in a blowover, but the driver had to shut off.”  I couldn’t find that photo, but here’s a semi-related pic of the famed Frantic Four doing a tire-smoking powerstand at good ol' Pomona Raceway.

The Insider grapevine also began to bear fruit with reports that “the Captain,” Jeg Coughlin Sr., had backflipped his Top Fueler at Great Lakes Dragaway, and I was thrilled to hear from his son Mike – a regular reader of this column as it turns out – who was more than happy to give me the details of the accident, which happened in 1980.

Folks these days know of “Senior” as the guiding force behind his sons' racing efforts and the founder of the mail-order giant that bears his name, but people forget that he was a real good racer for three decades, including in Top Fuel, where he won the Division 3 Top Fuel championship three times and finished a career-high seventh in 1978’s championship race. Anyway, the year before the blowover, Coughlin’s dragster was destroyed at the 1979 NHRA Springnationals at National Trail Raceway when his parachutes ripped off and he ended up in the catch net. Coughlin returned at the Springnationals the next year with a new Al Swindahl-built car and a crew consisting of, from left, his wife, Monica, and sons, Mike, John, Jeg Jr., and Troy -- a true family-run team. (There’s a pretty cool professionally prepared YouTube video here showing the Coughlins in 1979-80.)

It wasn’t but a month after his Columbus return that Coughlin skied their dragster in round one at the Division 3 points meet at U.S. 131 while racing Gary Beck. He landed that one safely, but the car got bent up, yet the family towed west anyway to Denver for the Mile-High Nationals at Bandimere Speedway, stopping at Mark Williams’ shop for a repair job. They lost early and headed back east to Union Grove, Wis., for the next Division 3 meet.

“We got rained out Friday and didn’t run the first qualifying session until Saturday evening,” remembered Mike, the family historian. “It was mineshaft air, and the track was good. We were making so much power that it went into a serious wheelstand, and by the time my dad caught it, it was too late and did a blowover. It landed and slid down the track to about three-quarter-track. It demolished the car – it pretty much went straight into the Dumpster -- and broke his arm. He said it was on one of the best passes he’d ever made, and he just didn’t catch it in time. I think we just didn’t have enough weight on the front end, and because the cars were so much shorter then, when it started to come up, it was pretty hard to save them. Also, it was pretty dark, and he said it was hard to figure out [how high the car had gotten] because of that.”

Coughlin was laid up the rest of the year and made only a few runs in 1981 before retiring from driving.

Somehow I also forgot about the late Gary Ormsby’s blowover during preseason testing at Firebird Int’l Raceway in 1991, even though a) I was there, and b) Russ Collins referenced Ormsby's crash in the quote I printed here last week about his own blowover two weeks later. Also in attendance was an 11-year-old (!) second-generation photographer who got his first national notice when we ran photos of the blowover in National DRAGSTER; the shots also appeared in Super Stock & Drag Illustrated and, most famously, Car and Driver. You might know him today for his stupendously popular photo blog and amazing shots: Mark Rebilas, surely this generation’s Steve Reyes when it comes to being in the right spot at the right time and keeping his cool when the action heats up.

I went back through the ND files and found that issue and an interview I did with Ormsby after the accident, which occurred on just the third full pass on his new Castrol GTX dragster. He noted that they had run the previous car nearly 150 runs with the same wing configuration and added that some were blaming a dip in the track for getting the car airborne.

“That’s about all we can figure,” he said. “People have said that, but I couldn’t say. The car started coming up, and I immediately got out of it when I couldn’t see the horizon. It hung there for a long time after I shut it off. I saw a videotape; after the motor shuts off, it coasted a good 300 feet and just hung in the air. When I saw the body panels fly off, I knew it was over.”

Like so many blowovers before and after, the car landed upright, and although it backed into the guardwall, Ormsby’s injuries were limited to a cut inside his mouth and bruises to his knees and shoulders. Sadly, we’d lose him later that year to cancer.

Also, I did hear back from Bobby Rex concerning Doug Foxworth’s IHRA blowever in Bristol in 1993. Rex, who was partners on the car with the Foxworth family from 1989 to 2002, confirmed my initial suspicions, that contact the previous day with John Carey’s car led to their blowover.

“John blew a rear tire, came across into Doug's lane, and ran over the car,” Rex said. “When we went back to the trailer, we talked about the fact that we were in a points chase with Doug Herbert, Frank Faifer [driver: Jim Bailey], and Don Garlits. The accident took off the panels and front wings. We straightened it and made body panels and put on another set of front wings, but they did not have enough angle. On Sunday, in the first round, the car left the starting line, and the front end was carried about 400 feet, which was normal for that car, but that started the blowover.”

Bret Kepner, who worked on ESPN's IHRA telecasts then, pointed me to this link, which is a good chunk of the race coverage; the Foxworth blowover, including an interesting segment on the safety crew talking to a still-stunned Foxworth in the cockpit and an interview with Rex, runs from 11:37 to 15:40.

OK, I think that catches us up with the blowover list though 1996, but I'm sure I'll be proven wrong. Coming Tuesday: The final chapter.