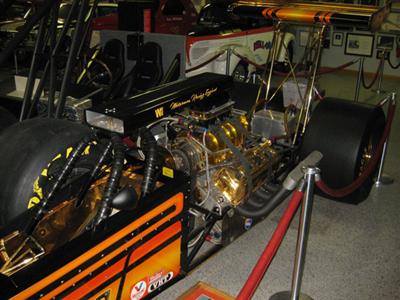 OK, so I lied (I warned you!). Even though I said no new column until July 13, here I am because I found myself with spare time at the end of Wednesday before heading out Thursday for Chicago, so here is a new column. The subject is still a golden one, as I have follow-up to the previous two columns on the subject of gold-plated Top Fuelers.

First off, check out the photo at right, submitted by Insider reader Mike McCarthy, with details of the Ruffalo & Ehlen dragster as it sits today in the Don Garlits Museum of Drag Racing. McCarthy, who lives in North Port, Fla., rode up to the museum a couple of weeks ago and took these fine photos that really show the amount of gold that went into the machine. Check out those beautiful valve covers and blower, and take a gander inside the cockpit, where the inside tin and seat is all gold, as are the controls, including the unique dashboard layout that Tony Ruffalo talked about in Monday’s column. Sweet! Thanks, Mike!

I was thrilled to hear back from Reno Nannini, who was the go-to guy at Precision Plating during this time and took charge of the plating efforts for Chris Karamesines and Ruffalo & Ehlen. There aren’t too many Reno Nanninis in the phonebook, so I took a chance and left a message, and he returned my call Tuesday afternoon, too late for that day’s column but good enough for this update.

Nannini, now 74, may not have a precise memory of the details of those projects of more than 30 years ago, but it was a pleasure to talk to him.

Nannini, who is retired from full-time duty at Precision Plating – now he spends a couple of days a week there, mostly “fooling around” in the machine shop and helping train his replacement – verified that all aluminum work was sent to an outside vendor for the nickel plating necessary to gold plate an item and explained how the electroplating process used a positive and negative DC current in the dip tank full of liquid gold to attract the gold to the item like a magnet. The longer the item was submersed and charged, the thicker the coating.

“The thickness [of the plating] varied from part to part, from 10 micro inches to 30 micro inches,” he said. “Gold was cheaper then, but it still was a precious metal, so we kept it at a minimum.”

Nannini, who has turned over the family racing reputation to his son, Vince, who competes in NHRA’s Top Dragster class, has fond memories of his time in the sport in the 1960s when he and partner/driver Al Fontanini ruled the world of injected nitro Funny Cars. “He and I together were a good team,” he recalled. “We were a good team.”

The duo parted company in 1970, and Fontanini went out on his own as “Fast Albert” with a blown nitro entry; he was killed in a highway accident in 1970. While waiting at a tollbooth on the Pennsylvania Turnpike, en route to a match race at New England Dragway, his rig was rear-ended by an 18-wheeler, a fiery accident that also claimed the life of crew chief Jim Christensen.

The Fontanini & Nannini Barracuda pictured above put them on the map and later was owned by Southern Californian Wendell Shipman, according to Ronnie Lahn, who crewed on the car for which Frank Pedregon was the crew chief.

“The car was really state of the art for its time,” wrote Lahn. “It had a full-tube chassis and an all-fiberglass body with aluminum interior. It came with a fuel-injected 426 Hemi with aluminum heads. We could never get it to run faster than 8.40s with the injected motor. It seems to me that Reno said they had it in the high sevens, which would have been pretty fast even for a blown car in those days (circa 1968).”

I received a couple of emails from readers Jody Austin and Lewis Irvine pointing me toward former Texas Top Fuel and Funny Car driver Chip Woodall, reporting that Woodall also drove a gold-plated fueler for car owner Jackie Peebles in the 1970s. Peebles apparently owned a plating shop in Gainesville, Texas. I recently became Facebook friends with Woodall (who celebrated his 67th birthday last Thursday – happy belated!) and have sent him a message requesting an interview or details about the car. I found several photos of Peebles’ dragsters on Woodall’s Facebook page, but they’re scans of handout photos, and the quality is not really there, but I think that the one pictured above might be the car. I can see gold front wheels, front spoiler, and valve covers. I’ve never interviewed Woodall, who also drove Gene Snow’s Top Fueler, but everything I have heard is that he was another of those larger-than-life, fun-loving Texas characters, so it may provide material for a future column.