Backtrack Tuesday: This, That, and Other Things

It’s Backtrack Tuesday at the DRAGSTER Insider, and I'm working hard to cleanse the inbox before diving into the two weeks leading up to the Big Go, the annual Mac Tools U.S. Nationals presented by Auto-Plus.

After writing about Bill Jenkins’ crash in Oswego, Ill., in the summer of 1977 during a Beat The Grump challenge with local racers, I was surprised to be contacted by several people who knew who was running “Da Grump” when he stacked up his Grumpy’s Toy Monza Pro Stocker, and then it wasn’t long before I heard from Paul Dazzo himself, who was wheeling his Midland Express ‘69 Camaro down the other lane when the Toy became quite less than playful.

I’ve exchanged emails with Paul since then, and he promises to share his side of his Brush with Greatness in the very near future.

I also heard from Stock eliminator ace Anatol Denysenko, whose mom, Joan, had defeated Jenkins the round before the crash (“She just about waxed him,” he noted proudly) and took the photos at right. His mom was wheeling a very quick '69 Torino Cobra coupe with 428 Cobra Jet power under the hood and open headers. They then took a seat to watch Jenkins take on Dazzo.

“When he did wreck the car, it was literally right in front of us,” Denysenko remembered. “As a 6-year-old, I was sitting on a post watching this car come right towards me. Dad (Alex Denysenko) and our paramedic friend Ken Kucera jumped the fence and were the first to the car. I still have a part of the front-end fiberglass somewhere.”

Column reader Richard Pederson also came up with a swell idea for a series of columns of “Who was in the other lane when ...” I like it! 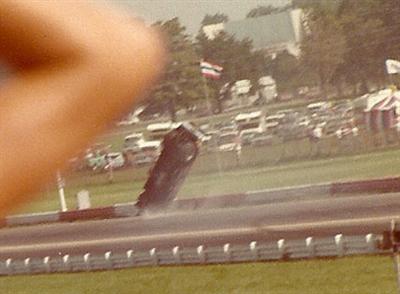 As a follow-up to last Tuesday’s story about Dale Emery’s wild ride and crash at the 1977 U.S. Nationals in Mike Burkhart’s Camaro, reader Mike Hedworth sent his own sequence on the crash, taken from a decidedly different vantage point than the famous sequence and Zapruder-ish video I ran with the column. Here's a pivotal point in the crash, where the Mike Burkhart Camaro goes up on its nose.

Steve Reyes, who spent a lot of time with Emery throughout the years, including going on tour with him in 1971 while Emery was driving the Flying Red Baron wheelstander (“He drove it like a AA/FA,” remembers Reyes) and accompanying the Blue Max crew to England on two occasions (“The Blue Max kicked everybody’s butt, and that includes [Gene] Snow, who also made the trip”), is a big-time Emery fan.

“One of those memories that stands out about Dale was that he always seemed to be very aware what was going on with the car he was racing. In 1968 at Sacramento, Dale asked me to go to the finish line and shoot pix of Pure Hell at speed, so away I went to the finish line. I got some great images of Pure Hell motoring at speed with its then-new Hemi engine. I delivered my glossy 8x10s the next weekend at Fremont. Dale took a look and started to show me how he knew the car was running over 200 mph -- the car’s windshield would fold down on top of Dale’s hands when the car ran over 200 mph. I know if I was driving that car, the last thing I’d be looking at would be my hands.”

(Speaking of Reyes, I want to send a big shout-out to my good pal and frequent and generous Insider contributor who is recovering after heart surgeries to insert two stents into his valvetrain. Stay well, my friend.)

Going back a little further, to the Chip Woodall and Jackie Peebles gold-plated car thread, I originally had reported that one of the Peebles-owned slingshots was an ex-Hawaiian Top Fueler driven by Mike Sorokin, but Roland Leong [and, later, Don Long]  was quick to point out that the car was actually the one driven by Mike Snively, and it was the last dragster he ever owned.

The dragster was sold at the end of the 1968 season, and – here’s a little fun fact for you – Leong actually had a new dragster on the jig at Long’s shop for the 1969 season before he decided to switch to Funny Car. That not-yet-completed dragster was sold to one of Leong’s former drivers, who did pretty well with it. Yep, that car became Don Prudhomme’s first Wynn’s Winder that “the Snake” drove to Indy wins in 1969 and 1970. I never knew that; I bet you didn't either.

The Woodall and Tharp tall Texas tales were a hit with many. I heard from David Pace, who later inherited the seat of the Carroll brothers’ Texas Whips Top Fueler, who acknowledged, “Almost every memory I have of Texas fuel racing has Chip involved in some way. And, to this day, Jackie’s cars were, and always will be, the baddest-sounding things on earth.”

To which Ma Green appended, “He's one of the funniest men I know but has a heart of gold! Chip will be [at the California Hot Rod Reunion], and you can see how really nuts he is.”

Reader B.J. Smith Sr. added, “I’m so glad readers will know about the great racers we’ve had here in Texas. I grew up here, and all articles in the '60s and '70s were either East or West Coast info. As history tells, we had a lot of gold mines right here. Man, was I having flashbacks reading your article. On behalf of all us drag racing fans here in Texas, we say thank you, Phil!”

I received the photo at right from former Top Fuel racer Dan Richins, far right, of him and fellow former fuel dragster heroes Carl Olson, center, and Frank Bradley on the Bonneville Salt Flats last week. Richins is a Salt Lake City resident, and Olson is a longtime Bonneville attendee and a member of the ultracool 200-mph Club, but it was “the Beard’s” first trip to the great white way.

All three, of course, are members of the historic Cragar Five-Second Club. Richins was the last of the original eight to run in the fives, recording a 5.93 pass with his Iron Horse dragster at the 1973 Supernationals at Ontario Motor Speedway not long after Larry Dixon Sr. ran 5.94. Olson joined the club the following year with a 5.94 at the March Meet, and Bradley closed out the membership with a 5.96 at the Division 7 meet at Orange County Int’l Raceway in June 1974.

Bradley also owns the unique distinction of being the only member of the Cragar Five-Second and Four-Second Clubs; he was among the first 16 to run in the fours with a 4.998-second clocking at the 1989 World Finals in Pomona.

At right is a wonderful photo  – shot by Steve Reyes – of the first nine members of the Five-Second Club. Back row, from left: Don Moody, James Warren, Gary Beck, Mike Snively, and Richins; front row, from left, Tommy Ivo, Don Garlits, John Stewart, and Dixon. All but Snively took part in a special Cragar Five-Second Club race at Irwindale in January 1974, which Garlits won. The traction-plagued event didn’t feature a single five – Garlits had low e.t. at 6.33 – and the final was over at the green when Dixon’s Howard’s Cams entry bombed the blower at the step. Richins lost in round one to Garlits, who also beat Stewart en route to victory.

As you can see on the list below, there are quite a few expected names (Garlits, Beck, Warren, Ruth, etc.) in that famous club and a few surprises, like Richins and Pete Kalb. (And, before you ask, Cragar lists Ivo as the charter member, not Snively.) I hope to chat with Richins in the next few days for his memories of his career.

Friday’s acknowledgement of Tim Kushi’s place in the sport’s annals met with a lot of hurrahs for the "little guy.” Reader Patrick Prendergast remembered him well. “Growing up a gearhead in Pittsfield, Mass., I remember he was revered by all us teenagers in the ‘70s as the top dog, our own ’Big Daddy.’ It was always a thrill to see him racing up against all the big guys at Lebanon Valley during the match races, giving them a run for their money, too. Once when I was 12 or 13, I rode my bike to his speed shop to ask to go in the garage in back to see his car; he graciously obliged, and I got a surprise when not only his Challenger was there, but one of Gene Snow's Snowman Chargers! I don't remember what that connection was, but still way cool to see both. Thanks again for the article remembering one of the ‘little guys’ who made an impact on and inspired a lot of racers and hot rodders in this neck of the woods.”

“We had a great celebration of Tim’s life,” he reported. “The line was out the door during the wake, and the memorial service was sad and funny at times with great Tim stories of playing golf and racing. Other racers, like Kalitta Motorsports, sent flowers. Tim touched a lot of people. We will all miss him and those emails and phone calls."

OK, kids, that's it for the day. My notepad is a little less cluttered and my sights already set on the next story, which includes interviews with Mr. Wemett and another of his former drivers, Tom Anderson, plus Dale Armstrong, Prudhomme, Ken Veney, and Billy Meyer. Bonus points if you can guess the topic of the tale that celebrates its 30th anniversary in Indy this year.