Part of the trick of this job is the research, but a more important part may well be knowing who to ask about things you won't find in the printed records or for additional details. Being able to reach out to a third party to get background information or to fill in the details is invaluable in some instances, and a case in point is today's subject.

Last week, I shared a photo that I had been sitting on of John Force with Gene Beaver, Louie Force, and Billy McCahill. I had mentioned that McCahill, himself a former Funny Car driver, was aligned somehow with the Force family, and reader Paul Katata smartly recalled the Chevy Citation Funny Cars of Force and McCahill on stage at a rock concert. I remembered the photo, too, which had run in National DRAGSTER, and that it had been a venue here in SoCal, the Santa Monica Civic Auditorium. As a denizen of SoCal beaches in my youth, I was well familiar with the auditorium, which had played host to concerts before and was the host to the T.A.M.I. Show (Teenage Awards Music International), a pretty famous gig in 1964 that featured The Beach Boys, The Rolling Stones, Jan & Dean, Chuck Berry, James Brown, Marvin Gaye, The Supremes, Smokey Robinson & The Miracles, Gerry & The Pacemakers, and other emerging stars, and was a former home of the Academy Awards (1961-67).

I didn't think to get Force – and wasn't sure he'd even remember it – because I remember several years ago trading e-mails with Steve Quercio, who had been a promoter and in Force's inner circle in the late 1970s/early 1980s. I tracked him down and asked about the concert, which, as it turns out, was a pretty big deal for an aspiring rock band some of you may have heard about since: Mötley Crüe.

"Oh yeah!" he enthusiastically responded. "That was my concert! John and I were very close, and I put him on stage at Mötley Crüe's first major concert."

All of this seems a little hard to believe, but Quercio provided a link to the Chronological Crüe website, run by Crüe expert and rock author Paul Miles, which includes this recap:

8/4/82 [April 8, 1982]
Mötley plays a sold-out show at the three-and-a-half-thousand-seat capacity Santa Monica Civic, which is produced by racing car promoter Steve Quercio, who has seen them play the Whisky and wanted to help get them to the next level …  Mötley shares the stage with a couple of Funny Cars owned by John Force. As they play, they set fire to various instruments and debut their new song "Knock 'Em Dead Kid." The performance and number of ticket sales for a local Hollywood club band finally attracts the attention of record labels and the event becomes a turning point for the Crüe.

Well, heck, who knew? So I pressed Quercio for additional info about the hows and whys of this interesting converegence of two "acts" on their way to the top, and Quercio was happy to oblige.

"In the late '60s, I had been selling Drag News at racetracks since I was 12 years old for my mentor, Jack Williams. Between Jack, his friend Tom McEwen, Don Rackeman, and Steve Evans, all I wanted to do was grow up and be a motorsport promoter. Jack took me under his wing, and I learned from him at Fremont Raceway, Sears Point, and the PDA races how to promote an event.

"Jack encouraged me in the '70s to go give it a shot on my own. I started renting Carlsbad Raceway and doing my own events. My good friend Gene Beaver, who I met selling magazines (and was another idol of mine) told me he wanted to introduce me to his cousin, this young kid like myself who called himself 'Brute Force.' So I met John, and we both hit it off really good! In those days, John had a hard time even going down the racetrack, so I started booking John into my races, and he wanted me to be his PR guy. I just laughed. Hell, no one knew me, and they sure in the hell didn't know who John Force was. I decided to work with John as a PR guy as well as continue promoting my events, and I started lining up dates for John and landed him the AHRA circuit.

"One classic story I remember is that I tried to book John into an RG Canning Car Show. They flat said, 'John who? We have no budget for that.' So I said, 'OK, no money, just give us a 15x20 booth next to the race car to do what we want with. Craig Hoezel (with Canning at that time) said OK. John said we can't do it free. I said, 'Don't worry; I've got an idea!' Pac-Man the game was GIANT back then, so I contacted a games company and cut a deal for them to bring 25 Pac-Man games, and we set them in the booth next to John's car, and for the whole three-day car show, those games next to our booth just flat kicked butt. I think we walked out with $3,000 or $4,000 that weekend. That is how we had to scramble to survive in those early days.

"The concert: John was still an unknown, but we always worked hard to get promotions going. We were just trying to feed both our families and keep the race car on the track. [OCIR track owner] Charlie Allen was good to John, but we always needed more money, as he broke everything. Keep in mind, this is way before any sponsor money, maybe hamburgers from Wendy's with a little display money. John told me, 'Quercio, figure out how we can get more booking money.' I thought, 'What would old Jack Williams do?' So I thought, 'Charlie needs radio to market his events, so I went to KROQ radio in L.A. and put together a promotion where we would make Brute Force the KROQ Funny Car. I told them, 'We don't want one dime in money, we just want $25,000 in radio trade advertising time. John and I went to Charlie and told him that if he would increase John's booking money, we would match that with radio time to promote the event. It worked! Now John was getting as much as the Blue Max but still was just a local Funny Car!

"So now, I have all this radio time and John hooked up with OCIR, what else can we do to get John exposure? I went to see this local L.A. band at the Whisky [Whisky a Go Go in Hollywood] one night and said, 'Man, these guys are off the wall. Big hair, heavy metal, WOW. They had no record deal, just playing local L.A. gigs. I went up to them and said, 'Hey, you guys ROCK. How would you like to play a major concert with Funny Cars on stage?' They said, 'Hell yes.' The band was Mötley Crüe. So I went back to John and said, 'Are you ready to have your Funny Car and Billy's Funny Car on stage at the Santa Monica Civic for a major concert?' After all, he was the KROQ radio Funny Car. John is not exactly your heavy-metal guy. He saw pictures of Tommy, Vince, Nikki, and Mick and had a fit. 'Quercio,' he said, 'What are you doing to me?' Don't worry, Force, this will get us attention. So I used my KROQ radio spots, and all over L.A. we promoted Mötley Crüe in concert with Elvira and Funny Cars on stage with John Force." 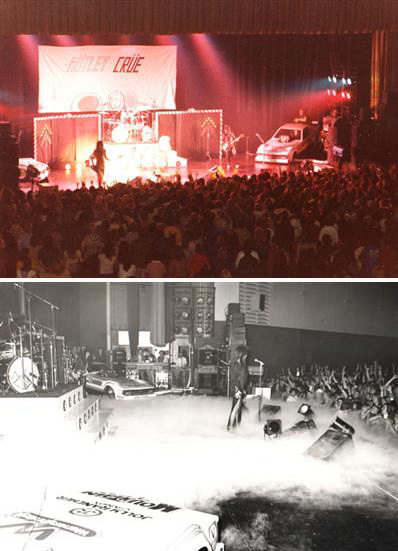 "On the day of show, we got to the Santa Monica Civic early and put John's car on stage. When Mötley Crüe arrived, they saw the Funny Car and freaked out! Light it up, man! John met the guys and was somewhat reserved, but as you know Force, in a matter of minutes, he had them in stitches. The show went on in front of a sold-out crowd that loved Mötley Crüe and John Force and Elvira as the emcee.

"As we all know, Mötley Crüe has gone on to be mega rock stars as well as our own legend, John Force, but those were the things we had to do in the early days to survive."

So, there it is … the day that John Force met Mötley Crüe as both were climbing the stairway to success. I hope to get to Force for his side of the story before too long.

Later this week, I'll have more follow-up to last week's dual "found in my Inbox" columns, featuring your comments and photos on some of the topics I covered.