The return of the Shelby Super Snake

When a drag racing legend like Don "the Snake" Prudhomme, who has driven some of the world's fastest race and street cars, is this excited about a car, you know it has its fangs sunk pretty deep into his heart.

Prudhomme has requested an interview from me, which is pretty much exactly the opposite of how it usually goes. All of these years and pit-area interviews later, I still get a thrill talking to the man whom I idolized as a teen and had the amazing good fortune to not only meet but also work with and around. Seriously … how often does that happen in life?

It's not like "the Snake" is a recluse or anything, and he's been very accommodating on the occasions I've asked to speak to him for matters outside of what's going on with his current ride, and it's not exactly like one of drag racing's true legends needs to go around asking for exposure, but instead of me asking for an audience with His Badness, he wants to talk to me. It makes me feel like a little schoolgirl. What, you think you wouldn't?

Anyway, the thing that has Prudhomme all coiled up with excitement is how cool the new limited Prudhomme Edition Super Snake package for the Shelby GT500 Mustang has turned out. The project, masterminded by longtime friend (and onetime sponsor) Carroll Shelby, the automotive giant who brought us such unforgettable machines as the AC Cobra and Shelby Mustangs of the late 1960s, is not Shelby's first special-edition car, but it's his first machine with purely straight-line intentions, which is why he brought old pal Prudhomme into the mix.

"Usually with the factories, these 'special-edition' cars are a trim package; maybe you've got your name embroidered on the seats or some stripes on the body, but this is a special car from one end to the other. It's not just putting my name on the car," Prudhomme assured.

The super-slick and almost obscenely outrageous new Stang was unveiled at the Wally Parks NHRA Motorsports Museum during the Kragen O'Reilly NHRA Winternationals. Prudhomme's influences on the look is obvious as the car has much Funny Car styling to it, from the extended front clip that hinges up flopper-style and the blower sticking through the hood (complete with three-hole injector) to the Funny Car-style rear wing, smaller front tires, and full roll cage.

Prudhomme and Shelby first partnered in 1968 as the result of their mutual existing partnerships with Ford. Prudhomme was running an SOHC "cammer" engine in his dragster with Lou Baney, and Shelby, of course, was turning everyday Mustangs into collector cars now worth six figures. They struck up a deal for Shelby to sponsor "the Snake's dragster, which became known as Shelby's Super Snake -- the same name the new car banners – and it was another of Prudhomme's old alliances that also helped bring the project to bear.

"Amy Boylan, who used to work for Hot Wheels at Mattel and now works for Shelby [she's president of Shelby Automobiles], started brainstorming the idea, and first asked me about doing it a year or so ago," said Prudhomme, "and Carroll wanted my input from day one. A lot really went into making it. They took a lot of photos of my old Funny Cars from all angles to take some of the Funny Car ideas and incorporate them into this car.

"The Cobras and Mustangs that Shelby built back in the '60s were all basically set up for road courses – not that you couldn’t drag race them – but this one is set up for drag racing,' said Prudhomme. "We wanted to have the blower sticking through the hood and the tilt front end; they've never done anything like that before."

“Don is an exceptional drag racer, and I’m proud that he drove my first Top Fuel car in 1968,” noted Shelby in the official press release. “By leveraging Don’s experience, we turned a really good car into a great drag racer that will beat up on the Mopar and Bowtie brigade right out of the box.” 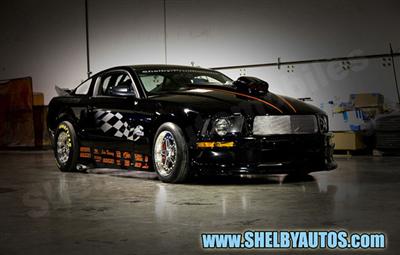 In stock form, the 5.4-liter supercharged V-8 produces 500 ponies and 480 pound-feet of torque and will gallop from 0 to 60 mph in 4.6 seconds and to the quarter pole in 12.8 seconds. Shelby Automobiles will use your 100-large to supersize that order into an 800-horsepower happy meal on wheels thanks to the addition of a Kenne Belle supercharger and other go-fast goodies such as a one-piece aluminum driveshaft. A full-race suspension is fitted under the body, which is equipped with slick rocker panels for that lowered-down Funny Car look. 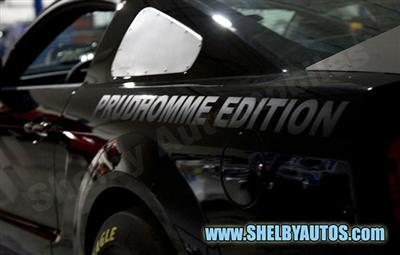 Only 100 Prudhomme Edition GT500 Super Snakes are being made, adding to the collectability factor – and cost. Prudhomme, of course, is "on the list" for one of the cars, which are now in production. "I've always liked cool street cars, but I've never had one like this," he says.

"The big thing was to have a car that you could drive to the racetrack and do your thing there, then drive it home," he notes. “It reminds me of how drag racing used to be back in the day when we would drive our cars to the dragstrip, race them, and drive them home at the end of the day. That's maybe the neatest thing about this car.”

Prudhomme finally got to take it for a spin in Phoenix, where the car was on display during the Lucas Oil Slick Mist NHRA Nationals as part of the display from U.S. Tobacco, which will give away one of these outrageous monsters at season's end. Another will go on the auction block at the Barrett-Jackson Auction, where it will be sold for charity.

After helping Shelby unveil the car at the museum, Prudhomme got behind the wheel – what, you didn't think he would?  --- and took it for a spin around the handling course at Firebird Int'l and even worked in an impromptu (and security-guard-attracting) parking-lot burnout with the tire-melting Mustang (what, you didn't think he would?), which only made him fall more deeply in love with it.

"I put it through its paces, and it handled pretty good, and it's a lot of fun," he said. "It's a special car. You see that big blower sticking through the hood, and it reminds me of my Funny Car. It's a bitchin' car."

I'm looking forward to seeing the car in person at the ACDelco NHRA Gatornationals next week, where Prudhomme hopes to actually get the car on the quarter-mile. My guess is that it will turn 10s.

"I hope to have a chance to take a fan or some people for a ride down the track in the car," he added. "Hey, you need to drive this car or go for a ride with me."

What, do you think I would?

Check it out for yourself at http://www.shelbyautos.com.