NHRA and Mission Foods, the world’s leading brand for tortillas and wraps, have partnered together for the Mission #2Fast2Tasty NHRA Challenge, an exciting new race program for the 2023 NHRA Camping World Drag Racing Series season.

Beginning at the NHRA Arizona Nationals in Phoenix on March 24-26, the Mission #2Fast2Tasty NHRA Challenge will introduce competitive racing to the Saturday schedule at regular-season events during the NHRA Camping World Drag Racing Series campaign, pitting semifinalists from the previous race against each other in a rematch for all Professional categories as part of a must-see challenge.

They will face off during the first qualifying session on Saturday, with the two winners then matching up in the final qualifying session with an additional purse and bonus points for the Countdown to the Championship on the line, adding another marquee attraction to the NHRA race weekend. The #2Fast2Tasty NHRA Challenge is also part of Mission Foods’ overall motorsports initiative to help racers and race teams.

“We are very excited to partner with NHRA and become the official sponsor of the Mission #2Fast2Tasty NHRA Challenge” said Juan Gonzalez, Mission Foods Chief Executive Officer. “This is a great opportunity to interact with NHRA fans in a fun and exciting setting, and I strongly believe that our partnership will create some unforgettable moments on Saturday race weekends.”

Following the Saturday competition at Wild Horse Pass Motorsports Park in Phoenix, the Mission #2Fast2Tasty NHRA Challenge will take place at all regular season races during the 2023 NHRA Camping World Drag Racing Series season, except for the two four-wide races in Las Vegas and Charlotte, ending at the prestigious Dodge Power Brokers NHRA U.S. Nationals. Overall, fans will have the chance to watch the can’t-miss challenge on Saturdays at 12 regular-season events.

Along with the additional purse and the chance to celebrate a victory on Saturday during a race weekend, competitors in the Mission #2Fast2Tasty NHRA Challenge will also be racing for bonus points that will be awarded at the start of the Countdown to the Championship playoffs. Each challenge winner will earn three bonus points that will be added to their points total to begin the playoffs, with the runner-up at each challenge earning two points and the quickest losing semifinalist earning a point, adding another massive incentive for race teams to chase a Mission #2Fast2Tasty NHRA Challenge victory.

“It’s exciting to see a great partner like Mission creating a program like the #2Fast2Tasty NHRA Challenge that gives back to the racers,” said Brad Gerber, NHRA Vice President and Chief Development Officer. “Mission is a company that is passionate about motorsports and drag racing, we’re thrilled to have them on board with a unique challenge that puts the racers first and is something the fans will certainly enjoy.”

Contested at 12 regular-season races, starting with the NHRA Arizona Nationals in Phoenix on March 24-26 and ending at the prestigious Dodge Power Brokers NHRA U.S. Nationals on Aug. 30-Sept. 4. The challenge won’t take place at either of the two four-wide races in Las Vegas and Charlotte or during the Countdown to the Championship playoffs. 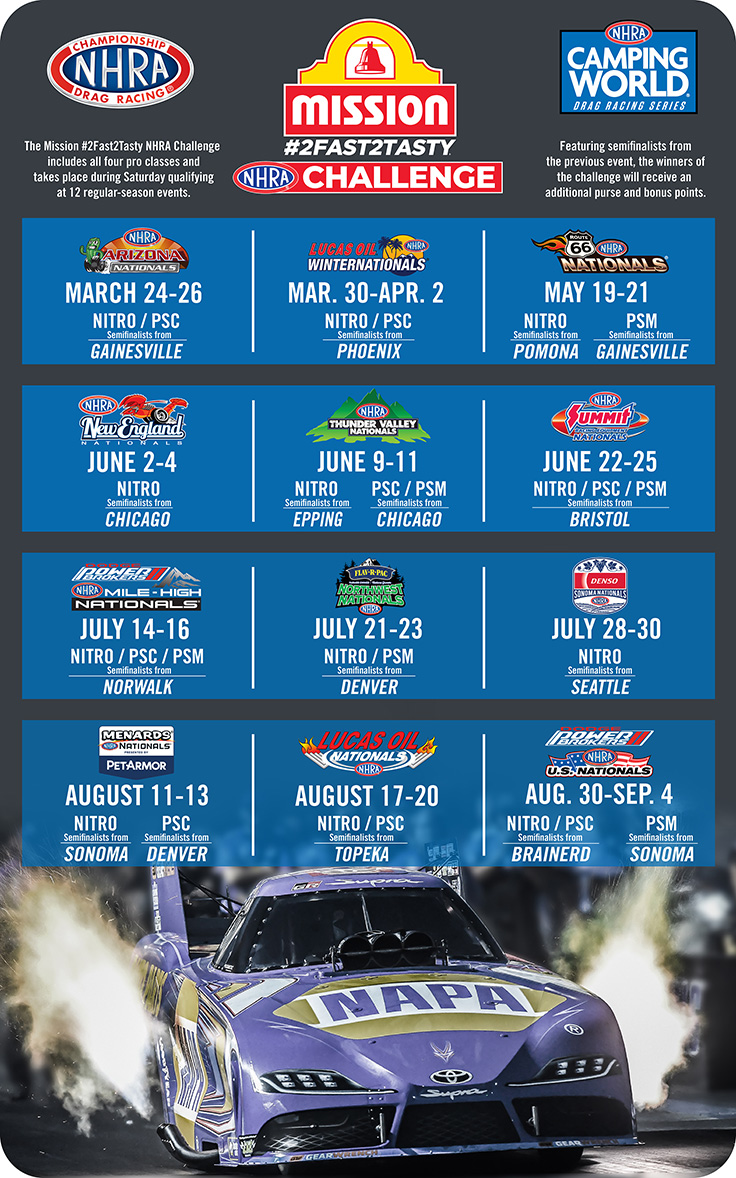