The relationship between Wendland and Mercier Racing began in 2017 when Wendland built the team’s first Top Fuel Dragster. It has continued to develop for the last five years, with Mercier pulling double-duty racing in both the Top Alcohol Dragster and Top Fuel Dragster classes. 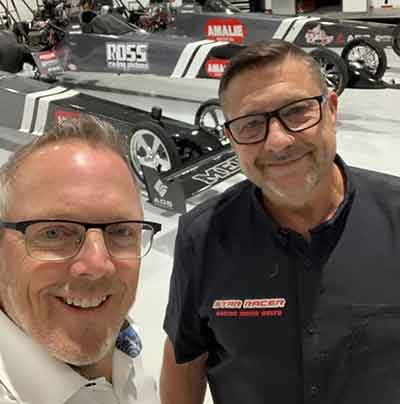 “For me, Top Fuel was always the unknown,” said Mercier. “It was important for me to continue the TAD program to make sure I continued my long-term passion. This year, with Rob’s commitment in partnering with our team, we will put the A/Fuel car aside after Gainesville and focus on the Top Fuel Dragster for [the rest of 2023].”

In addition to a planned schedule of eight NHRA events, Mercier also plans on attending several match races that will serve as testing opportunities, continuing to build on the consistency and competitive performance that Wendland brings to the table.

With only three appearances in Top Fuel in 2022, Mercier was able to run a career-best 3.75 with Wendland as his tuner.

“Dan has the passion and resources to have a top 10 team,” Wendland said. “I am excited for the opportunity to be a part of this team and share my experiences and knowledge to help develop the future of Mercier Racing.”

Wendland will be managing five experienced team members, four which are based in St-Remi, Que., including Dan Mercier, Benoit Duquette, Alex Lanctot, and Brent Lagace along with Josh Scott of San Antonio, Texas, who served under Wendland as a part of Terry McMillen’s team, as well as some part-time team members that will be added.

Wendland isn’t concerned about the distance, explaining that, "Everyone has learned how to work remotely over the last few years due to the pandemic, so that’s how we will manage this partnership. We will use teleconference and zoom meetings to discuss progress on items needing accomplished and any other relevant information regarding the team’s preparation.”

With Wendland’s reputation in the forefront, Mercier knows he is setting his team up for success.

“Rob has had many notable successes in the past, including working with some of the best crew chiefs in the industry, like Austin Coil, Brian Corradi, Mark Oswald to name a few, and having the ability to sign him on board is an exciting opportunity,” Mercier said. “Now, it is time to win some rounds. We have high hopes of developing a professional and well-respected team.”

The Mercier Team just moved into a new state of the art 13,000-square-foot shop in St-Remi, Que., and are ready for the task that lies ahead.