NHRA’s Hot Rod Heritage Racing Series 15th season got off to a roaring start at the 64th Annual March Meet contested March 3-6 at renowned Famoso Drag Strip. With a history of races dating back to 1959, the March Meet has always been one of the premiere events on the sport’s winter calendar. This year’s edition did not tarnish those high expectations. With over fifty nitro-burners competing in four classes, there was no paucity of action during the four-day race despite a rainy Friday and an Arctic wind-driven blast on Saturday. As usual, fans parked their vehicles along Famoso Rd. a mile or so each way in dogged determination to see their drag racing heroes.

Nostalgia Funny Car qualifying was paced by Drew Austin, the 2021 CHRR champion, at 5.592, followed by Billy Morris, Bobby Cottrell, Jerry Espeseth, and Geoff Monise as the top five, accordingly. In round one of eliminations, Cottrell and Morris both carded winning 5.63s, closely followed by Dan Horan Jr. at 5.677 and Cory Lee at 5.678. In round two, Cottrell began to assert his superiority defeating Dan Horan Jr. with a 5.637. In the semifinals, Geoff Monise beat Cory Lee with an engine borrowed from Gary Densham, and Cottrell defeated Kris Krabill driving the Lebor-Bartone ’69 Camaro. Unfortunately, Monise was unable to make the call for the final round and Cottrell “took the Tree” for the win.

Nostalgia Top Fuel saw a resurgent Mike Fuller return to the form of his days with Bill Dunlap in the 1990s and early 2000s. His “Forever Young” Dave Uyehara dragster with veteran Bret Williamson driving, qualified No. 1 with a 5.789. Right there with Fuller was Jim Murphy who desperately wanted to win his sixth March Meet and break the tie for wins with Don Garlits. In a script made for the theater stage, it came down to Fuller versus Murphy in the final round. Murphy took an ever so slight lead with Williamson only .006 back, and it remained thus all the way to the stripe. By a MOV of .034, Williamson got there first, 5.731 at 256.04 mph to Murphy’s 5.771 at 256.75 mph. 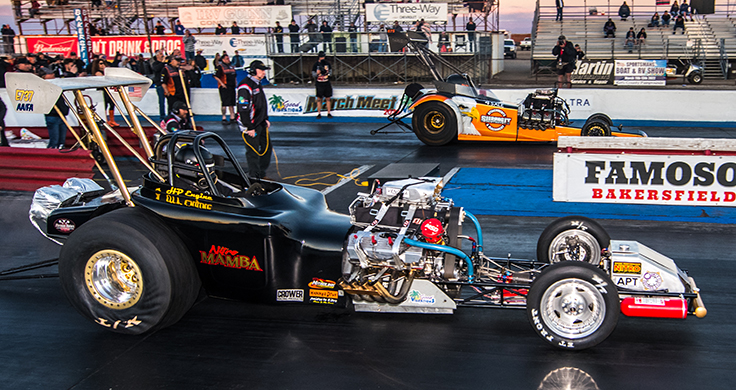 Fuel Altered testosterone was rampart at the 64th annual March Meet with fifteen of the mutant beasts competing in an eight-car field. It was so potent that several of them were unable to tone down their race cars for a 6.0 index, failing to qualify due to running too quick. In round one of eliminations, No. 1 qualifier Dan Hix ran a perfect 6.000 against Johnny West. Then, No. 2 qualifier Mark Whynaught just squeezed out a 6.010 win over Pete Peterson at 6.029. Not surprisingly, it was Hix and Whynaught in the final round of eliminations. Both competitors struggled to get hold of the racing surface with Hix’ 7.010 surviving Whynaught’s troubled 8.877. 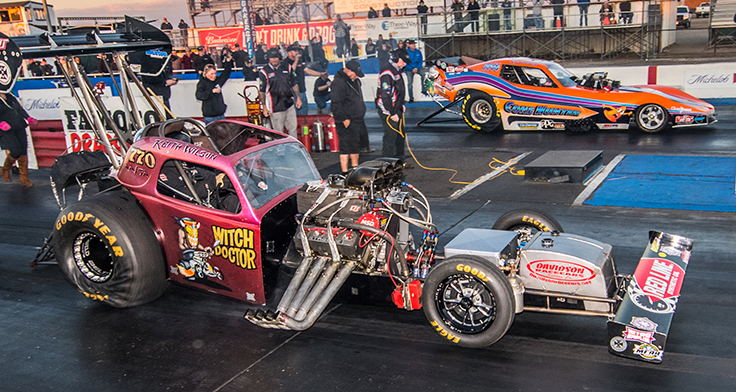 Lyle Greenberg has always wanted to win one of the prized March Meet trophies. The Nitro Pro Comp stage provided just the opportunity for him to do it. Although Greenberg’s ’77 Corvette-bodied beauty qualified No. 1, he would need to subdue Keith Wilson’s “Witch Doctor” to realize that dream. Paired in the final round of eliminations, Greenberg’s prudent 6.006 gave him the win as Wilson’s “Witch Doctor” concocted a dose of medicine too powerful for the 5.90 index, running a 5.836 elapsed time.

Group 1 winners went to Kin Bates in A/Fuel Dragster, Matt Baldonado in Jr. Fuel Dragster, and Tony Trimp in 7.0 Pro. The Adams-Bates venerable ’96 Tuttle dragster continues to paralyze the competition in A/Fuel Dragster. The team from Redding, CA, swept all honors with low elapsed time (5.976) and top speed (236.38 mph). Late last year, Junior Fuel Dragster icon Bud hammer pasted away. Matt Baldonado purchased the dragster and will continue to race it in the Heritage Series. In tribute to this great man, Baldonado packed his chute with some of Bud’s ashes and released them over the drag strip during a qualifying run. This good karma continued Sunday with Baldonado’s victory in Junior Fuel Dragster. Tony Trimp won 7.0 Pro in a thriller over Daylin Perriera. In the final round, Trimp’s 7.013 was enough to combat Perriera’s close 7.052.