The 2023 season will mark the dawn of a new era for the Top Alcohol Funny Car class with the introduction of a new rules package that is designed to not only increase participation but also promote parity and a level playing field.

The most significant rules revision, and the one that will undoubtably be most noticeable to fans, is the introduction of an injected nitro combination for Funny Cars.  Similar to the combination that has proven popular in the Top Alcohol Dragster class, the injected nitro Funny Cars will feature a 2,300-pound minimum weight, and will race at 5.35 pounds-per-cubic-inch with a maximum of 90 percent nitromethane.

The new combination will give racers two viable options including the conventional supercharged methanol combination that has been in existence since the creation of the Pro Comp class in 1973 and the return of the injected nitro combination, which has been popular with Top Alcohol Dragster competitors for decades.

According to Josh Hamming, NHRA Top Alcohol Rules Committee Chairman, the rules revision was a result of many months of productive meetings involving racers, team owners, manufacturers, and NHRA personnel. 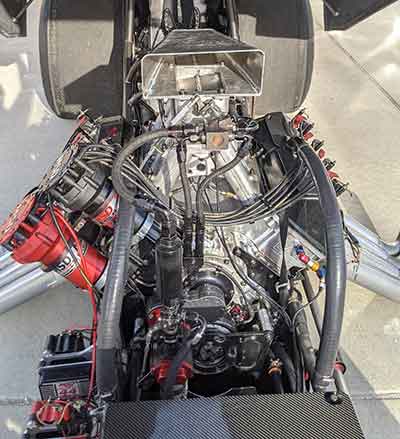 “We’ve had discussions internally and externally for many years regarding the viability of an A/Fuel Funny Car combination,” said Hamming. “We got together as a group in Charlotte during the Four Wide race last spring. That was the official start of the process that got us to where we are today. After that, we had a couple of Zoom meetings and invited all current racers to join. We held one for racers in the East and one for those in the West. We welcomed all thoughts and opinions, not just regarding the A/Fuel combination, but for other changes to be made as a whole. We discussed a variety of topics including technology, performance, and even the race format.

“Since the initial gathering in Charlotte, we’ve had multiple meetings with racers as a group and many one-on-one conversations with racers, including current, former, and prospective future racers regarding these changes,” said Hamming. “We’ve also been in frequent contact with the Sportsman Racer Advisory Committee and as a group, we’re all in agreement that this is a positive step moving forward.”

Anytime there are multiple combinations in a given class, the subject of parity is always front and center. The Top Alcohol Dragster class is a prime example with supercharged methanol and injected nitro cars racing side-by-side. Historically, there have been occasional rules adjustments in the name of uniformity, both combinations continue to be competitive.

“Much like the dragsters, we will do what needs to be done in order to maintain parity,” Hamming said. “We don’t want one particular combination to dominate.  Our plan is to have a conservative approach to performance of any new combination and see their performance prior to noting if additional adjustment is needed. No one knows exactly how they’re going to run. We need to establish a baseline and go from there. We understand that the injected nitro combination is new and there is likely to be a lot of untapped potential. Our biggest goal is to achieve and maintain a healthy car count. The ultimate goal would be to monitor performance and make very small adjustments only when necessary. This year, we made a small adjustment regarding fuel temperature on [injected nitro] dragsters, and that seemed to help maintain a level playing field. That’s ultimately where we want to be with the Funny Cars.”

So, when will NHRA fans get to see the first injected nitro Funny Car in action, and how competitive might they be? It’s a bit too early to tell since the rules revision was only recently made public, but there is a growing sense of optimism that there are several racers talking about exploring this new avenue.

“As for their popularity, it’s too early to say how many A/Fuel Funny Cars will be built, and when they will be built,” Hamming noted. “There are some safe bets that certain people will build them just because of their backgrounds and experience with injected nitro cars. We’re also aware of a couple of cars that currently exist. We’ve also had a few conversations with racers who have begun to accumulate parts to build a car.”

While the introduction of the A/Fuel combination will be the biggest change to the Top Alcohol Funny Car class in 2023, it isn’t the only change. Next season, bodies from 1969 or newer cars will be accepted. Previously, entries were restricted to 2000 model year and newer. That adjustment could potentially allow a nostalgia racer to cross-over using their existing nostalgia body. Electronic fuel injection is also permitted and the same goes for two-step ignition systems, and billet roots superchargers.

“Our goals here are simple; we want to help grow the class and keep it interesting for both the racers and the fans,” Hamming said. “I’m also pleased that we were able to have these discussions and ultimately formulate this rules package using input from virtually everyone that has a stake in the class. The entire process was very productive and I’m looking forward to seeing the results.”