Matt Smith is closing on his sixth Pro Stock Motorcycle world championship, a number that would tie him with Andrew Hines and Dave Schultz for the most in NHRA Camping World Drag Racing Series history, but he'll still have to hold off longshot Joey Gladstone to get it done.
11 Nov 2022
Posted by NHRA.com staff
News

The finishing touches are all that’s left of what Matt Smith hopes is his sixth Pro Stock Motorcycle world championship, a number that would tie him with Andrew Hines and Dave Schultz for the most in NHRA Camping World Drag Racing Series history.

But it’s not official yet, which means Smith knows the job isn’t quite done heading into this weekend at the 57th annual Auto Club NHRA Finals at legendary Auto Club Raceway at Pomona. Smith currently leads Joey Gladstone by 104 points heading into the finale in the Countdown to the Championship playoffs, meaning he has a sizable lead but not enough to officially clinch the title.

That could come as early as a first-round victory if qualifying goes well for Smith on his Denso Auto Parts Buell, but the standout remains as focused as ever as he closes in on a historic achievement.

“I feel comfortable and confident heading into a track where we’ve done really well,” said Smith, who has five career wins in Pomona. “I’m just going to come in with the mindset of running my race and try to stay focused on winning. If I do my job, we’ll be OK. There can be a lot on your mind, but I’m going to rely on my experience, and we’ll see what happens.” 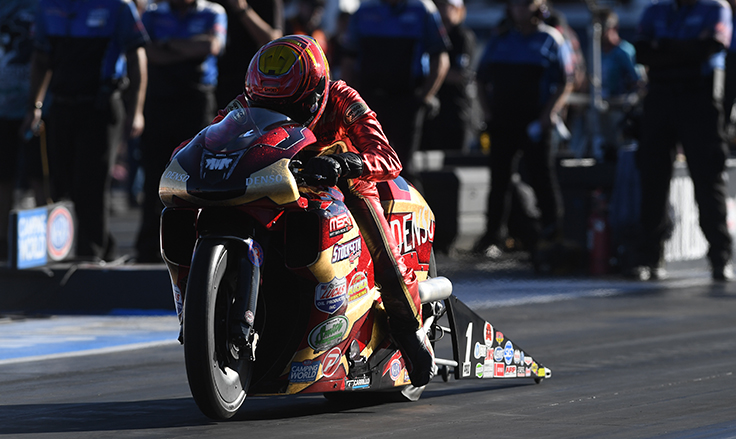 Smith has picked up four wins this season, including one in the playoffs, and advanced to three finals in the postseason, taking control down the stretch in a class that had been back and forth for most of the year. Gladstone has enjoyed a breakout year with three victories but would need an incredible weekend – plus a significant slip-up from Smith – to claim his first world title. That may be difficult considering Smith’s track record in Pomona, where he’s managed to win the race and clinch the world title on the same weekend three different times.

“It’s huge to win the race and win the championship all in the same weekend,” Smith said. “We’ve done it numerous times, and we’ve got a good tradition of being able to do that. Hopefully, we can do it again. The first half of the year, we tested a lot of different things, but it’s one of those deals where you have to stay focused and do your job.” 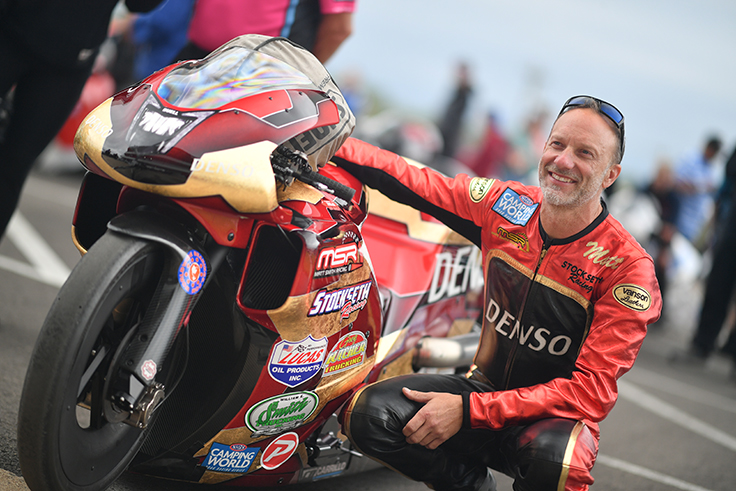 Smith will have to contend with a number of top-tier riders, including Gladstone, his wife, Angie, Angelle Sampey, Eddie Krawiec, and Jerry Savoie, but the longtime star is solely focused on making history. That’s driven him all year, and with a pursuit of a sixth world championship nearly complete, Smith is eager to finish the job.

“It would mean a lot to get a sixth title and be in the all-time club with Andrew and Dave,” Smith said. “I grew up watching Dave race, and he was one of my mentors. I wanted to be like him. All in all, it’s been a good deal to get to this point, and I’m excited to hopefully put my name in that hat.”

To purchase tickets to the Auto Club NHRA Finals at Auto Club Raceway at Pomona, call 800-884-NHRA (6472) or visit www.nhra.com/tickets. Children 12 and under are admitted free in general-admissions area with a paid adult.