When longtime crew chief John Medlen announced his retirement toward the end of the 2022 NHRA Camping World Series season, the Ron Capps Motorsports team knew they were left with big shoes to fill. For the past six years, Medlen had worked side-by-side with lead tuner Dean “Guido” Antonelli. The co-crew chiefs enjoyed tremendous success together, including most recently, having tuned team owner/driver Capps and the NAPA Toyota Funny Car to back-to-back Camping World NHRA championships, seven wins, 14 final rounds, and 10 poles over the past two NHRA seasons.

Rather than go the traditional route and tap into the pool of nitro crew chiefs with long resumes and proven track records, Capps and Antonelli decided to hire from within to fill the vacancy left by Medlen’s departure and have announced the promotion of car chief Tom Buckingham to the role of assistant crew chief for 2023. In his new position, Buckingham will continue to oversee the crew, but will also take on the added responsibility of many of the team’s day-to-day operations such as ordering parts and coordinating work and travel schedules. He will also learn more about the tuning aspects of the car. 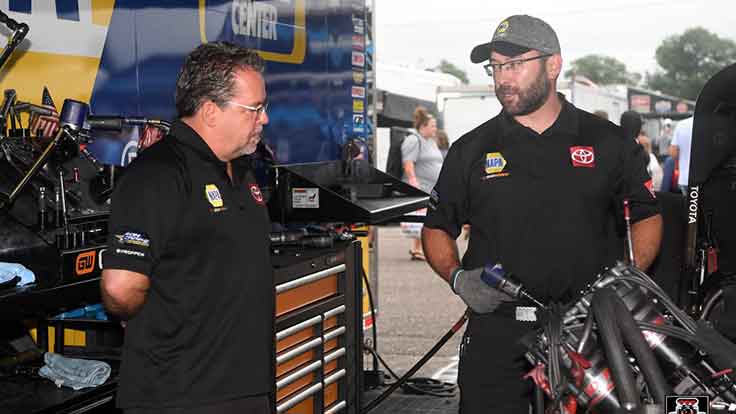 “I’ve been a car chief for the past five years – two years with Ron and for three years before that with Jack Beckman’s team,” said Buckingham, who has three world championships under his belt, including one as a crew member for John Force in 2010, along with two he earned with Capps.

“I grew up at the track. My parents had a turkey leg stand at the race track in Brainerd [Minn.] when I was a little kid, so that’s where the love of drag racing all started for me. Later, my dad was a sales manager for Budweiser, and I got to know the Bernstein team and decided I wanted to work on one of these cars. I ended up going to the University of Northwestern Ohio to learn more about working on high-performance cars, and once I graduated, I came out here and have been working on nitro teams ever since. I’m so grateful to now have this opportunity to learn from Guido, one of the best tuners in our sport, and advance in my career.”

For Antonelli, the opportunity to promote Buckingham felt like a full circle moment, as his big break into the NHRA crew chief ranks came when his former bosses took an interest in his career growth and guided him into a tuning role.

“Austin Coil and Bernie Fedderly gave me a chance back when I was working at John Force Racing,” said Antonelli. “They took me under their wing, and I learned under them, working as a car chief or assistant crew chief for 12 years, and in 2007, I was given the opportunity to tune Ashley Force’s car. If they would have never given me that opportunity, I’m not sure how my NHRA career would have turned out, so now I’m trying to pay it forward. It’s my turn to give someone their shot.

“Tom, or ‘T Buck’ as we call him, knows all aspects of the car and has a good understanding of how the equipment operates,” added Antonelli, who has worked with Buckingham since 2017. “He’s been out here for 15 years, and he’s very organized and a great leader. I have no doubt he’ll excel in this role and use it as a learning experience. He’s like a sponge.”

Like Antonelli, Capps also understands how having a big break can impact one’s career. His ‘shot’ came in 1995 when he was commissioned to drive a Top Fuel dragster owned by Roger Primm. Although the Primm team competed in only a partial schedule, Capps recorded his first NHRA national event win with the group, which helped him to catch the eye of his future boss, Don Prudhomme. 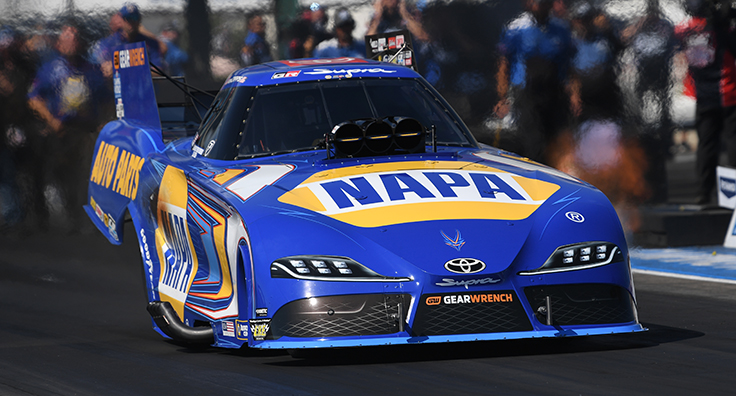 “I’ve known T Buck for quite some time, even before he joined the NAPA car, but getting to work with him for the first time in 2021, it was easy to see why he was so well-liked, and well-respected in the pit area,” explained Capps. “He was an incredible leader as a car chief. When Guido and I first started talking about a replacement for Medlen, I told him ‘This is your team to run,’ and when he suggested T Buck, it was an immediate yes from me. I couldn’t think of anyone more deserving than him to get a shot at being an assistant crew chief. I’m very excited heading into next season and having him in that role.”

Replacing Buckingham in his previous position is Travis Wirth, the team’s clutch specialist, who will now take on the added responsibility of car chief in addition to his clutch duties.