Rockingham Dragway owner Steve Earwood has announced the latest in a series of upgrades to the venerable Division 2 track: a complete electronic makeover.
06 May 2022
Posted by NHRA.com staff
News

Rockingham Dragway owner Steve Earwood has announced the latest in a series of upgrades to the venerable Division 2 track: a complete electronic makeover.

Through an agreement with Bob Brockmeyer, founder and CEO of Compulink, the existing Compulink scoring and timing equipment will be replaced with next-generation versions, including new computers, new monitors, and new sensors all connected to new cable strung from starting line to finish line. 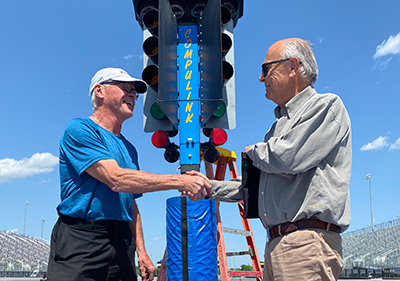 “Bob is always refining his system,” Earwood said, “and we owe it to our racers and fans to keep up with the changing technology.”

It will be the second major upgrade to the timing system during Earwood’s ownership. He also oversaw several expansions of the Pro and Sportsman pits, an upgrade of the scales, erection of new read-out scoreboards, and installation of a high-tech Musco lighting system.

He arranged for the first re-paving of the quarter-mile surface since the track’s construction and, unhappy with the result, had the work done two more times to get it right and a third time to maintain its integrity.

Among the other construction projects completed on his watch were a new ticket office, new concessions buildings, a crossover bridge linking the Pro and Sportsman pit areas, concrete guardwalls that run the length of the quarter-mile, and repaving of the main entrance road.

Work on the scoring and timing upgrade will begin within the month, Earwood said.