An impressive season has put Robert Hight on the verge of a fourth Funny Car world championship, but with two heavyweight contenders looming, Hight knows he needs to take care of business one more time at this weekend at the Auto Club NHRA Finals.
11 Nov 2022
Posted by NHRA.com staff
News

An impressive season has put Funny Car’s Robert Hight on the verge of a fourth world championship in the NHRA Camping World Drag Racing Series. But with two heavyweight contenders looming, Hight knows he needs to take care of business one more time at this weekend's 57th annual Auto Club NHRA Finals at legendary Auto Club Raceway at Pomona to secure the title.

In what has been the best season of his career to this point, Hight has racked up eight wins, 12 final appearances, and six No. 1 qualifiers in a loaded Funny Car class, a nod to what the veteran and his team have done in their 11,000-horsepower Auto Club Chevrolet Camaro SS.

Despite the incredible success, defending world champ Ron Capps and Matt Hagan, who has three world titles, are still lurking. Capps is 61 points back, and Hagan, who won the most recent race in Las Vegas, is just 63 points behind, meaning Hight’s quest for another title likely needs another great weekend in Pomona.

“I can’t wait to get it going,” Hight said. “The truth is, we’re focused, and we’re going to try to get our ninth win. I’m battling with two great drivers, and we’ve battled all season long. I knew it was going to be this way, and it’s been great racing all season long. But we’ve got to focus and make eight great runs. If we do that and get our ninth win, we’re the champs, and we’ll get to celebrate, and that’s how I want it to play out.”

The finale is also points-and-a-half, meaning both Capps and Hagan could get to within two rounds of Hight if they close the gap to less than 60 points during qualifying. That puts an onus on every run this weekend, but those are moments where Capps, Hagan, and Hight – who have combined for six of the last eight world titles in the class – have thrived throughout their careers.

“All three of us, we’ve been in the trenches, and we understand how everything has to be perfect on these cars to make these great runs,” Capps said. “You’re talking three cars that love to throw down, and Pomona is epic, and it’s historic. If we can get it under two rounds heading into eliminations, you never know what can happen in Pomona. There’s nothing better than waking up Sunday morning in Pomona and having a shot at a world championship. It’s a great feeling." 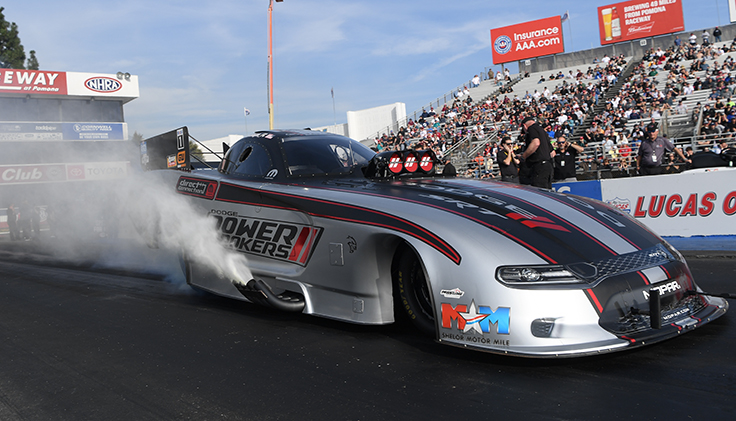 Hagan stayed in contention in Las Vegas in his 11,000-horsepower Dodge Power Brokers Charger SRT Hellcat, coming through in what he called a must-win situation. The same might hold true in Pomona, where the Funny Car standout for Tony Stewart Racing will try to grab a fifth victory this season. He’s dueled it out with Hight extensively this year and will aim for a hot finish to stay alive in the title hunt.

In his first year as a team owner, Capps has been steady all season, picking up five victories in his 11,000-horsepower NAPA Auto Parts Toyota GR Supra. That’s made it already a successful season for the longtime standout, but a Pomona victory and a world championship – which would make him the first back-to-back Funny Car champ in 20 years – would make it even sweeter. 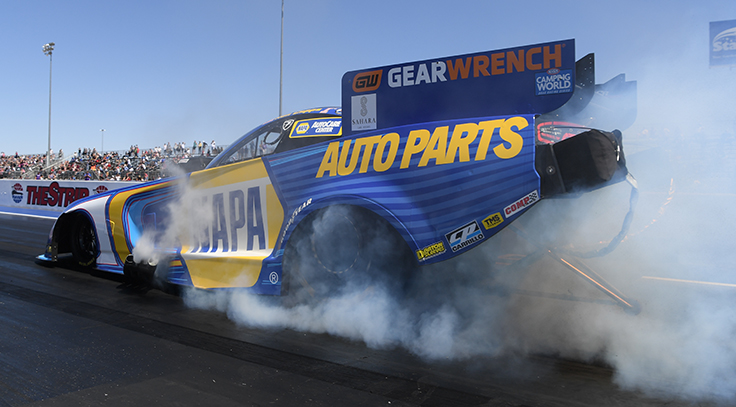 “It’s been a whirlwind, and it’s been a crazy year,” Capps said. “Going into this weekend, you couldn’t have asked for a better shot. It’s been a dream year, and I’m living the life I never thought I would have as a team owner. I’m just happy to be where I’m at and just have the chance to run with all these great cars out there.”

A fourth world championship would also mean a great deal to Hight, who struggled last season and was determined to turn it around in 2022. The team has done that and then some, putting together dominant stretches throughout the year. He’s won twice in the playoffs – already setting a career-best for wins in a single season – but Hight’s sole goal this weekend remains perfection.

“We know things can turn in a hurry, but we’re really focused on getting every qualifying point we can,” Hight said. “We’re not overlooking anything. You’ve got to make four perfect qualifying runs and then do that four more times on race day. These are three of the best cars in the country, and we’re all going to be running quick. We’re going to have to make perfect runs. It is crazy how close all of this is.”

To purchase tickets to the Auto Club NHRA Finals at Auto Club Raceway at Pomona, call 800-884-NHRA (6472) or visit www.nhra.com/tickets. Children 12 and under are admitted free in general-admission areas with a paid adult.