Even the rain that forced the postponement of the final rounds couldn’t dampen the enthusiasm of the many racers, fans, and event workers that celebrated the return of drag racing to Route 66 Raceway in Joliet, Ill., last weekend.
10 Aug 2022
Kevin McKenna, NHRA National Dragster Senior Editor
News

Even the rain that forced the postponement of the final rounds couldn’t dampen the enthusiasm of the many racers, fans, and event workers that celebrated the return of drag racing to Route 66 Raceway in Joliet, Ill., last weekend. 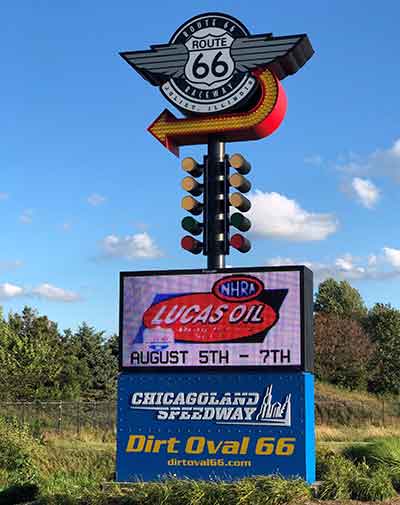 Dormant since the end of the 2019 season, the Joliet track returned to action as more than 400 racers took part in the NHRA Central Region event dubbed the “Route 66 Raceway Revival.” For most, the event was akin to getting reacquainted with a long-lost friend as the Joliet track had been a regular stop for North Central Division racers since it opened in 1998.

The return to Route 66 was made possible in large part by Division 3 Director William Tharpe and his staff, who worked tirelessly to not only promote the event, but also to make sure the facility was suitable for competition after being inactive for more than two years.

“To have the opportunity and the honor to bring this facility back to life was something I won’t soon forget and it’s something I would do again,” said Tharpe. “It was definitely scary because there were so many unknowns. We tried to prepare as best we could, but we also understood this was not an ordinary divisional event.”

Qualifying in all classes was completed and the first two rounds of eliminations were run before the event was halted by rain. The final rounds will be contested at the next North Central Division Lucas Oil Series event in Bowling Green, Ky., next month.

Tharpe noted that planning for the event began more than a year ago and it involved numerous trips to the track and meetings with track management. 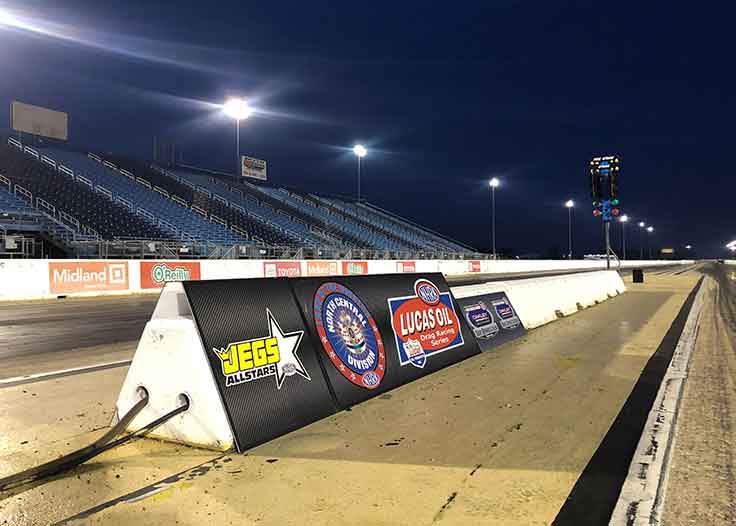 “My first visit was last November when I drove home from the Las Vegas [NHRA Camping World Series] race,” Tharpe said. “We knew the big wild card would be the track surface, but I was surprised to see how well it held up, especially through a couple of Chicago winters. There were some minor fixes, but no real issues.”

Tharpe gave credit to many people for their help in pulling off the event, including NHRA Safety Safari Director Jeff Conley, who flew home from the event in Seattle and immediately went to work assisting the staff at Route 66 Raceway.

“Jeff made sure we had a full compliment of equipment necessary to run the race,” Tharp noted. “He gave up one of his few free weekends, and it made a big difference. Overall, the logistics we needed to clear were big, but everyone stuck together to get it done.”

From the start of the event, it was clear that nearly all of the 450 competitors who were there, realized they were a part of something special. Tharpe marveled at the competitors who took time to welcome spectators at the gate, and make sure they enjoyed themselves.

“It’s one of those things can’t explain,” Tharpe said. “I think everyone who was there knew what was on the line. You could feel the pride they have for this race. The fact that so many racers supported the event means the world to us.”

When it comes to future drag racing events at Route 66 Raceway, whether Lucas Oil Drag Racing Series or the return of the Camping World NHRA pro series, Tharpe described the mood as “cautiously optimistic.”

I’ve spoken with the NASCAR people who manage the track and we even had Bob O'Dekirk, the Mayor of Joliet, and there certainly is a mutual interest in bringing events back. I certainly hope to see something work out in the future. The area deserves it and our racers and fans deserve it.

“There are a few names that were instrumental in the events success including, Collette Nelson, the Sr. Manager of Facilities at Chicagoland Speedway, Charlie Lindsey, who has also been with the track for many years, Brad Bueschel, our Division 3 Starter, [NHRA announcer] Alan Reinhart, who also helped promote the event, and Kelly Ardan, who is the lead timing and scoring operator for the North Central Division, and finally the Route 66 Raceway staff. To say this was an event to remember is a complete understatement.  Being there was special for so many but being part of the process is priceless.”