The NHRA Pro Mod Drag Racing Series will open in Gainesville, the first of 10 races in the 2023 campaign. The action-packed class will race at the four-wide event in Charlotte and make its debut at both Route 66 Raceway in Chicago and also New England Dragway in Epping.

Those two first-time appearances are part of a five-race stretch that also includes a return trip to Bristol and an event in Norwalk, before a break until Brainerd. After a race in St. Louis, the season finale will also move back to Las Vegas in late October.

Top Fuel Motorcycle, which includes the record-breaking Larry “Spiderman” McBride, thrilled fans at two stops in 2022 and will race in Chicago and Topeka next season.

The Mountain Motor Pro Stock class, featuring exciting and powerful 800-plus cubic-inch engines, will compete at six events in 2023, starting in Chicago and also races in Epping, Denver, Topeka, either the fall Charlotte race or St. Louis, and Dallas.

In the Lucas Oil Drag Racing Series, both Top Alcohol Funny Car and Top Alcohol Dragster will compete at 14 national events, with Top Dragster and Top Sportsman racing at 18 races apiece. Super Stock, Stock, Super Comp, and Super Gas will be contested at all 21 national events, with Comp taking place at 17 races and Super Street taking part at seven events on the national scene in 2023. 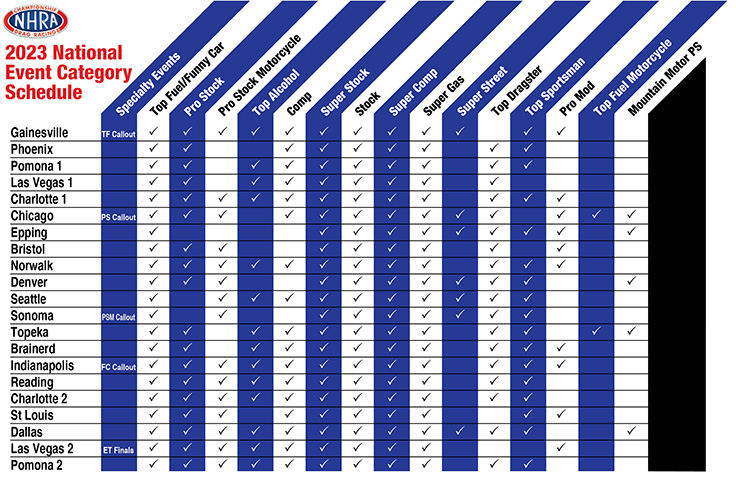