McBride, who broke a drive belt on his Friday night attempt and lost the round to opponent Dave Vantine, leveled the score in the three-round match race on a decisive 5.61 to 5.89 decision.

McBride, who turned 64 earlier this year and has carried the “Spiderman” nickname since 1980, when an announcer at the U.S. Nationals saw him nimbly moving about on Danny Johnson’s bike during a run, was thrilled to make the record run in front of his home state crowd

“To be able to do it here at home was incredible,” said McBride, who resides in Poquoson, Va. “I've been treated like a king here; it has been awesome that all theTop Fuel car guys and Funny Car guys who have helped me and all the support that I've gotten.

"We just kind of hopped the bike up a little bit and calmed it down low and out in the middle,” he said of the record tune-up. “It got a little bit loose, and I had to pedal it a little bit -- you know, just grabbed the rear brake -- to get it caught back up, and, boy, really run a good back half. I knew I went awful fast. I didn't really realize I went 268, but I knew it was really fast. 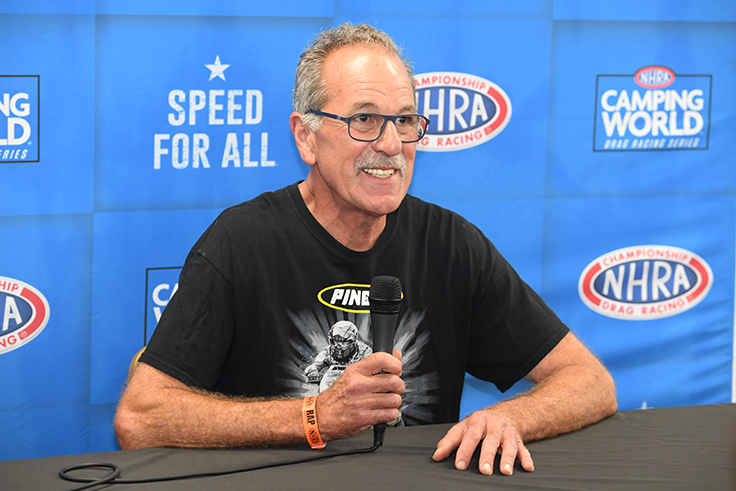 "It was my honor to be here and to be supporting NHRA because I'm a major drag racing fan, you know, right now into the sportsman guys. I just wanna do everything I can do for drag racing. We've had a lot of help from people like Bobby Lagana, Bill Miller Engineering, and [Dave Grubnic]. We've had a lot of people who have pitched in to help us a little bit so to get the thing calmed down enough so we wouldn't blow the tire off and we could do the show that we were brought here to do.”

And the trick to riding such a wild machine?

“Hold on tight. Stay down low. Throttle works both ways.”