Charitable causes near and dear to the hearts of NHRA team owners Joe and Cathi Maynard will be prominently on display as the Maynard Family Racing team closes out the year by campaigning “giving cars” at the final two races of the 2022 NHRA Camping World Drag Racing Series season.
26 Oct 2022
Posted by NHRA.com staff
News

Charitable causes near and dear to the hearts of NHRA team owners Joe and Cathi Maynard will be prominently on display as the Maynard Family Racing team closes out the year by campaigning “giving cars” at the final two races of the 2022 NHRA Camping World Drag Racing Series season.

Eight-time Top Fuel world champion Tony Schumacher will make a run for his ninth Las Vegas trophy during the NHRA Nevada Nationals aboard the American Mobility Project dragster. Next month, Schumacher will pilot the A Soldier’s Child Top Fueler at the season-closing Auto Club NHRA Finals. Both cars are independently funded, meaning there is no cost associated with either nonprofit organization to be recognized through the dedicated tribute liveries.

“The goal is simple: to get more people to donate to these causes,” said Joe Maynard. “The more eyeballs and awareness we can bring to these two organizations, the more money that will end up being raised.”

“Don Schumacher Racing has a long history of fielding ‘giving cars,’ and that was something we wanted to continue as we took on primary ownership of this team. We’re pleased to be able to shine a big spotlight on Gary and Mari’s organization this weekend in Las Vegas. The American Mobility Project fulfills such a big need for those living with paralysis, including many of our nation’s veterans who have sacrificed so much for our country. AMP’s mission is stronger than pretty much anything out there that isn’t related to a commercial venture,” added Maynard, a retired Army Engineer Sergeant, on behalf of he and Cathi, who served as an M.P. in the Army. 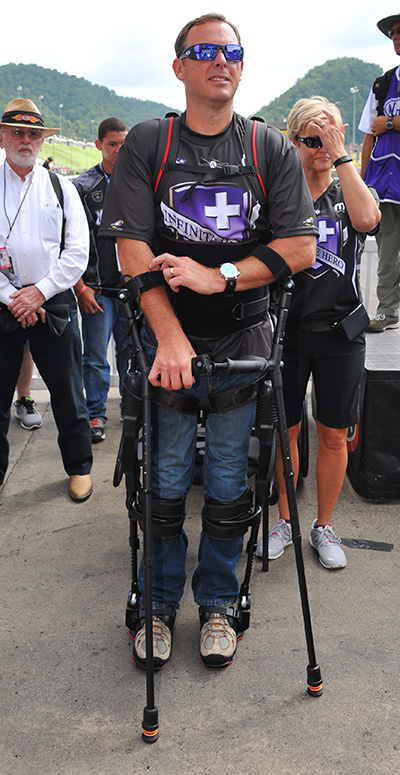 Gary and Mari Linfoot are well-recognized within the NHRA community and were regulars in the Don Schumacher Racing pits through the team’s involvement with the Infinite Hero Foundation. At one time, Gary Linfoot was pictured on the rear door of Jack Beckman’s race hauler when Beckman campaigned the Infinite Hero Foundation Funny Car, and many NHRA fans are still moved by the memory of Linfoot standing for the national anthem at the 2015 Bristol race thanks to the assistance of an exoskeleton. It was the first time Linfoot was able to stand for the anthem since becoming paralyzed from a helicopter accident during his 19th combat tour in Iraq.

“We’ve been involved with the NHRA community for many years, but this is the first time we will be showcasing our own organization to the drag racing community in such a large and impactful way,” said Mari Linfoot. “We’ve seen firsthand how beneficial ‘giving cars’ can be, and we’re so grateful to Joe and Cathi Maynard that there will be an American Mobility Project car on the track this weekend in Las Vegas.”

In addition to their shared love of drag racing, the Maynards and Linfoots have another commonality – both families reside in Clarksville, Tenn.

“The Maynards have been involved with our organization since the beginning,” added Linfoot. “They attended our inaugural fundraising event in Clarksville, which is how we met, and have been active with AMP ever since. They gave us a jumpstart early on to be able to change lives all throughout the country. The passion they have for American Mobility Project is evident, and using Tony Schumacher’s race car to banner our cause this weekend is just another example of that.”

For Schumacher, the opportunity to call attention to an organization that draws a large number of veterans as beneficiaries is an honor.

“I spent nearly two decades representing the U.S. Army,” said Schumacher, who earned the nickname ‘The Sarge’ during his time behind the wheel of the U.S. Army dragster, which spanned from 2000 – 2018. “I met so many wonderful people through that partnership at all different stages of their military careers – new recruits, people at home in between deployments, veterans – so, I’m very aware of the challenges that are associated with someone becoming disabled, and regardless of whether that person is a veteran or civilian, the need remains the same. What the American Mobility Project is doing is so important and so necessary. Of course, anything we can do to help support our nation’s heroes and their families, I’m all about, and I like how this organization also reaches beyond that and aims to help anyone in need of mobility assistance.”

Fans wishing to support the Maynard Family Racing team’s efforts in raising funds for American Mobility Project can make a donation by visiting americanmobilityproject.org. Those attending this weekend’s event at The Strip at Las Vegas Motor Speedway are encouraged to stop by the Fatheadz Trackside Store, where select items benefitting AMP will be available for purchase. For fans cheering on from afar, merchandise can be purchased via the Maynard Family Racing e-store.