A visionary and transformative figure in both business and entertainment, Ollen Bruton Smith, the founder and executive chairman of Sonic Automotive, Speedway Motorsports and Speedway Children’s Charities died June 22 of natural causes. He was 95.
22 Jun 2022
Posted by NHRA.com staff
News

A visionary and transformative figure in both business and entertainment, Ollen Bruton Smith, the founder and executive chairman of Sonic Automotive, Speedway Motorsports and Speedway Children’s Charities died June 22 of natural causes. He was 95.

Born March 2, 1927, Smith was the youngest of nine children and grew up on a modest farm in Oakboro, North Carolina. As a member of the Greatest Generation, Smith learned the value of hard work early in life.  With an inspiring determination and relentless optimism, Smith built a business empire through the automotive and motorsports industries and left a legacy to inspire generations of his family, friends and colleagues.

“My parents taught us what work was all about,” Smith said in 2008. “As I look back, that was a gift, even though I certainly didn’t think so at the time. A lot of people don’t have that gift because they didn’t grow up working. But if you are on a family farm, that’s what you do. Everything is hard work.” 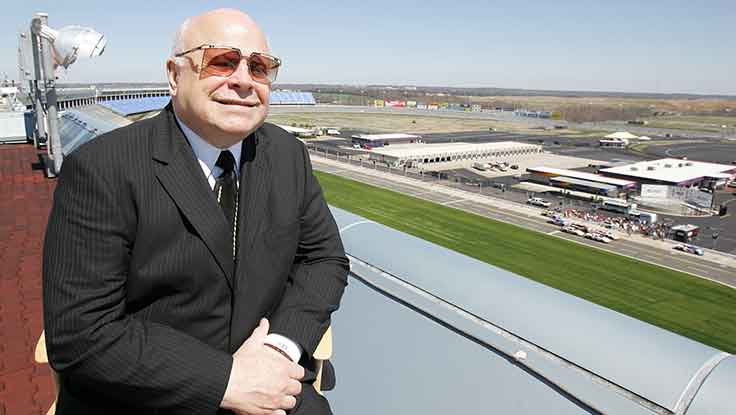 In January of 1997, Smith founded Sonic Automotive and took it public on the New York Stock Exchange (NYSE:SAH) in November of the same year. In just a few years, Smith grew Sonic into one of the nation’s largest companies, and in 2000 it was first officially recognized as a Fortune 500 company based in Charlotte, North Carolina. Sonic Automotive is now a Fortune 300 company and one of the nation’s largest automotive retailers with over 160 retail dealerships in over 23 states, representing 25 automotive brands. Since inception, Sonic Automotive dealerships have received many nationally recognized awards and accolades for exceeding customer satisfaction and automotive retail brand performance standards.

Smith’s first job outside the family farm came at age 12 when he went to work at a local saw mill. Two days after graduating from Oakboro High School, Smith took a job in a hosiery mill, before he eventually made a purchase that would lead him to two successful business careers.

“I bought a race car for $700. The whole idea at that time was that I was going to be a race car driver,” Smith once explained. “I learned to drive, but that career didn’t last long.” Smith’s mother had other ideas and prayed to a higher authority. “She started fighting dirty,” laughed Smith in a 2005 interview with Motorsport.com. “You can’t fight your mom and God, so I stopped driving.”

Smith sold his first car, a 1939 Buick sedan, for a small profit and continued to sell cars from his mother’s front yard. The young entrepreneur also promoted his first race before he was 18 years old. 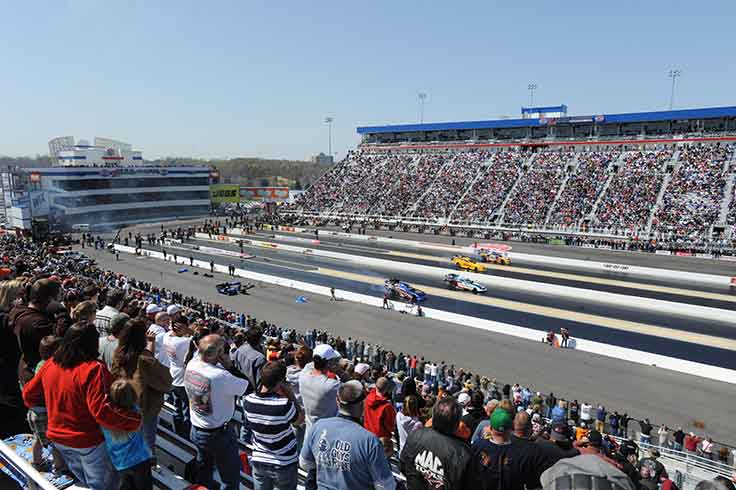 “There was a whole lot of unrest with the drivers and car owners at that time,” Smith continued. “We had a meeting and I was unlucky enough to be appointed a committee of one to promote a race. I had never done that, but I promoted a race in Midland, North Carolina, and I made a little bit of money, so I thought I’d try it again.”

In his early 20s, Smith’s career as promoter and car salesman took a turn when he was drafted by the U.S. Army during the Korean War. Smith served two years stateside as a paratrooper, then returned to selling cars and promoting auto races featuring the burgeoning National Association for Stock Car Auto Racing (NASCAR). Through a rough era for the sport, Smith was one of the first professional promoters to pay good purses, tend to the needs of the fans and find unique ways to promote events at speedways he leased around North Carolina.

“I'm a frustrated builder who had a knack for promoting races and it’s been fun to always try and push the sport to greater heights for the fans,” Smith told the Associated Press in 2015.

In 1959, he partnered with NASCAR driver Curtis Turner and built his first permanent motorsports facility, Charlotte Motor Speedway. The track opened in June 1960 with a 600-mile race, the longest ever in NASCAR’s history.

In the years that followed, Smith found success opening several automotive dealerships. Opened in 1966, his first dealership was Frontier Ford in Rockford, Ill, where he married and started a family. While growing his automotive business, Smith’s passion for auto racing never wavered.

“I love the racing business. I want to contribute more and more,” Smith said in 2015. “You hear us preach about ‘fan friendly.’ I think that is a driver for me to just do more things. I enjoy the contributions I’ve been able to make to the sport.”

“When you think about the Charlotte Motor Speedway and Bristol, and tracks like New Hampshire and Sonoma and Atlanta, he’s been the best,” 2019 NASCAR Hall of Fame inductee and fellow automobile dealer Roger Penske told NASCAR.com in 2016. “There’s no question. He set the bar.”

“His mind is racing all the time; he’s done so much for the sport,” said Rick Hendrick, an auto dealer and fellow NASCAR Hall of Famer, in a 2016 interview with NASCAR.com. “He’s so brave to step out and try things that have never been tried before. He helped build this sport.” 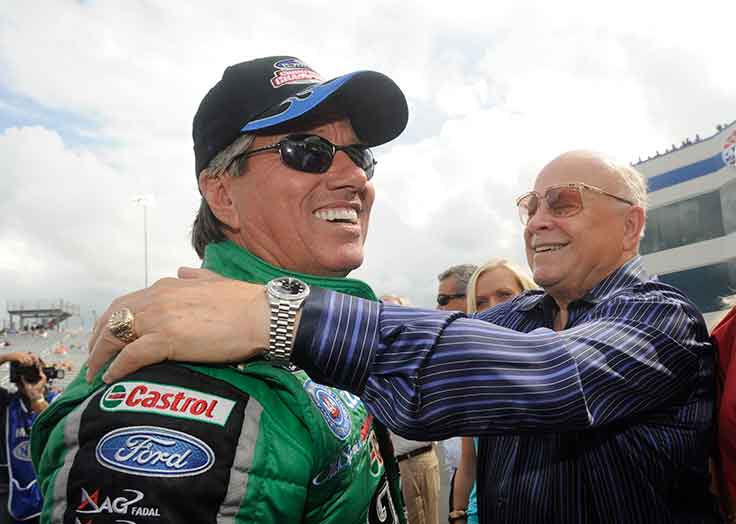 Following a 2021 victory at zMAX Dragway, John Force dedicated the win to Smith.

“I love this guy and everything he’s done for our sport,” said the 16-time NHRA champion. “I’m excited I get to send this trophy home to somebody I love---a guy who built our sport.”

“I learned from my own experience that when people go to an event – like a big race – they may know who won the race, but all the other stuff they don’t remember,” Smith once said.

“I want to put something on so regardless who won the race, it will be a memorable experience. We’re here to entertain fans, and I want them to go home with a memory that will last forever.”

"On behalf of everyone at NHRA, we offer our heartfelt condolences to the family and friends of Bruton Smith, who was a true ambassador of our sport,” NHRA President Glen Cromwell said. “Bruton was a remarkable, one-of-a-kind visionary who always had an amazing commitment to NHRA drag racing,  building some of the most innovative, state-of-the-art facilities in our series. His passion to bring new fans to the NHRA and advance our sport was truly unmatched. Bruton will be incredibly missed by everyone he inspired, but his legacy will always live on.”

A true entrepreneur at heart, Smith had a passion for growing people and business. His love of the automobile and racing businesses drove him to continually build and expand, all while taking care of his family and co-workers.

Even with his many accomplishments in motorsports, Smith often commented that the auto retail business was his first love and maintained his primary office at his Town & Country Ford dealership in Charlotte throughout his distinguished career.

“You have trophies, you have championships, you have wins, but friends are what really make the difference,” fellow NASCAR Hall of Fame inductee Darrell Waltrip said about Smith in 2019. “Bruton Smith has been one of my heroes since I started racing in NASCAR in 1972.”

Under Smith’s leadership, Speedway Children’s Charities has distributed more than $61 million to local organizations across the country that improve the quality of life for children in need.

Survivors include sons Scott, Marcus and David; his daughter, Anna Lisa; their mother, Bonnie Smith; and seven grandchildren. Information regarding funeral arrangements will be released at a later date.