After putting together an impressive start to the 2022 NHRA Camping World Drag Racing Series season, Matt Hagan will look to solve the unique and thrilling challenge of four-wide drag racing at the “Bellagio of Dragstrips" to keep that streak going.
29 Apr 2022
Posted by NHRA.com staff

After putting together an impressive start to the 2022 NHRA Camping World Drag Racing Series season, Matt Hagan’s year has a chance to get even better when he heads to zMAX Dragway for this weekend’s Circle K NHRA Four-Wide Nationals.

The Funny Car points leader and three-time world champ has won two of the past three events this season, including Sunday in Houston, handing the first-year Tony Stewart Racing (TSR) team its first two victories in the process. It’s been a dominant stretch for Hagan in his 11,000-hp Dodge Power Brokers Charger SRT Hellcat Funny Car, advancing to final rounds in four of the first five races in 2022.

Trying to keep this hot streak going, Hagan will look to solve the unique and thrilling challenge of four-wide drag racing at the “Bellagio of Dragstrips.”

“I’ve done everything from red-light to not stage the car to win the race to ‘what just happened?’ and that’s four-wide racing for you,” Hagan said. “The mentality of it all, there’s just a lot going on. It changes the dynamic of everything, and it changes it up, but it makes you a better driver. It certainly makes things different, but you have to adapt, and you have to rise to the occasion. The mindset you need to have with four-wide racing is different, and we’re here to put on a great show for our fans.”

Steve Torrence (Top Fuel), John Force (Funny Car), and Steve Johnson (Pro Stock Motorcycle) picked up wins last year in Charlotte, and this year’s race will again be broadcast on FOX Sports 1 (FS1). It is the sixth of 22 races during the 2022 NHRA season and the signature event at zMAX Dragway, giving fans the spectacular chance to watch four 11,000-hp nitro-burning machines blast down the track. 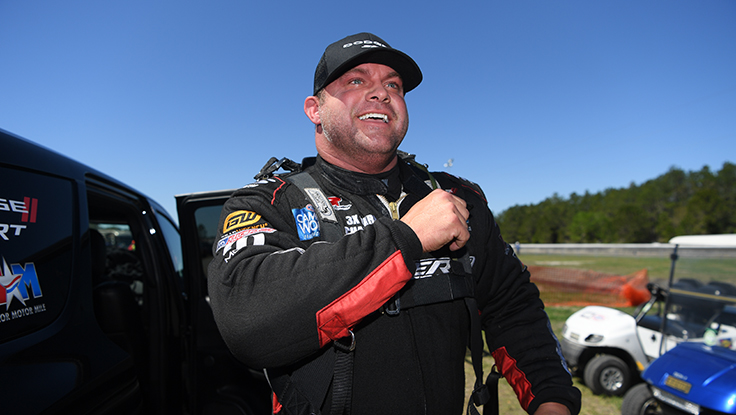 Hagan understands the challenges of the four-wide setup, but he’s also embraced it, winning the race in Charlotte in 2013. To get a third win this season, Hagan will have to get past a huge list of star drivers, including defending event winner Force, Robert Hight, who also has two wins this season, defending world champ Ron Capps, J.R. Todd, Tim Wilkerson, Cruz Pedregon, Alexis DeJoria, and Bob Tasca III.

But Hagan has also thoroughly enjoyed every bit of his new venture racing with Stewart and TSR. The longtime star couldn’t have asked for a better start, and he said that goes back to the leadership Stewart brings to the table, as well as his veteran team.

“Tony has been great, and we’re just having fun racing,” Hagan said. “He’s been a great boss, and it’s been a great environment, and that’s been a reflection of what we’ve done on the track. He just wants to win, and having that mentality where everyone’s on the same page, it just drives everything to the next level. He wants to win, and he wants to be on top, and we’re going to try to do everything to make it happen. It’s just a good feeling right now, and this team is in a good headspace. [Crew chief] Dickie [Venables] has always put a fast car under me, and we’ve always been able to throw down. It’s like a slugfest out there, and it’s been epic.”

To purchase tickets to the NHRA Four-Wide Nationals, visit www.charlottemotorspeedway.com or call 800-455-3267. Children 13 and under are admitted free in general-admission areas with a paid adult.