Leah Pruett is ready to keep her recent momentum going at one of the Top Fuel standout’s most important races of the season, this weekend’s 42nd annual Dodge Power Brokers NHRA Mile-High Nationals at Bandimere Speedway.
14 Jul 2022
Posted by NHRA.com staff
News

Coming off the best race of her 2022 NHRA Camping World Drag Racing Series season, Leah Pruett is ready to keep that momentum going at one of the Top Fuel standout’s most important races of the season, this weekend’s 42nd annual Dodge Power Brokers NHRA Mile-High Nationals at Bandimere Speedway.

It’s her sponsor’s race, as well as the first race in the famed three-race NHRA Western Swing. Winning on Thunder Mountain has always been important for Pruett, who grabbed a Denver victory in 2018, and that’s especially true during the 2022 season.

She’s the Top Fuel driver in the Dodge Power Brokers dragster for the first-year Tony Stewart Racing team, which puts the spotlight on Pruett for several reasons. After advancing to the semifinals at the most recent race in Norwalk, Pruett is ready to embrace that spotlight in what she hopes is her first winning weekend of 2022. 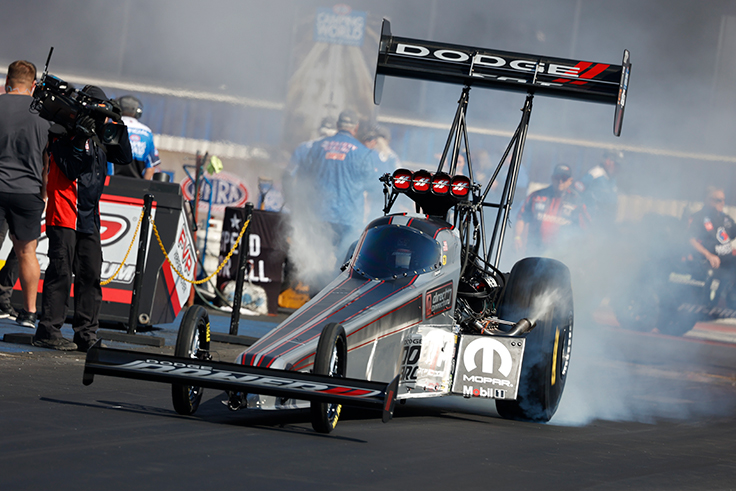 "Our minds are on Mile-High and the necessary changes the car needs from different pistons, the uniqueness of the event, how the car has cooperated in the last couple races, to fuel adjustments are all just precursors for the Dodge Power Brokers event,” Pruett said. “It is going to be one to win, I've always said it. Some people think the U.S. Nationals are a big one. Winning the Dodge Power Brokers Mile-High Nationals would be the pinnacle of the year, in my opinion. That is where our backbone is, on top of that mountain.”

Steve Torrence (Top Fuel), Matt Hagan (Funny Car), and Matt Smith (Pro Stock Motorcycle) won the 2021 event, and this year’s race will be broadcast on both the FOX broadcast network and FOX Sports 1 (FS1), including live eliminations coverage starting at 4 p.m. ET on Sunday, July 17 on FOX. It is the 11th of 22 races in 2022, marking the halfway point of the season, and Pruett is eager to make it a memorable second half.

There’s been the expected ups and downs of a new team, but Pruett has stayed positive throughout, praising the work ethic of a team continuing to grow together. She believes the payoff will come soon, and it could happen in Denver, though there are several challenges. The first is the racing conditions unique to Thunder Mountain, where the NHRA stars will race at an elevation of nearly 6,000 feet. Pruett will also have to deal with the likes of points leader Mike Salinas, who has four wins this season, four-time defending world champ Torrence, Brittany Force, who has three wins in 2022, Justin Ashley, Antron Brown, and Austin Prock, but she likes how her team has continued to perform under pressure.

“We performed well in Norwalk with our Detroit executives at the track, and we intend to do the same and build on that for Denver,” Pruett said. “We needed a bit of this rejuvenation. We have a healthy program, and that's also very important. There are teams out here running on the edge and hurting a lot of parts. Our healthy program will allow us to push, which will allow us to qualify better and get on top of that mountain."

In Funny Car, Pruett’s TSR teammate tasted his first success on Thunder Mountain a year ago, as three-time world champion Hagan crossed a Denver win off his bucket list in 2021. That was a huge win for Hagan, and the standout certainly has plenty of momentum heading into the weekend in his 11,000-hp Dodge Power Brokers Dodge Charger SRT Hellcat. He’s currently second in points, picking up three wins already in 2022, and a fourth would be a big deal for Hagan.

Back-to-back Denver wins would be huge for the longtime standout who had waited for years to win on the mountain. Getting two straight would continue his strong season and position Hagan well for the second half of the year, but it won’t be easy going against a loaded field that includes points leader Robert Hight, who has four wins in 2022, 16-time world champ John Force, defending world champ Ron Capps, Alexis DeJoria, who lost to Hagan in the finals last year, Bob Tasca III, Cruz Pedregon, and J.R. Todd.

"I'm looking forward to getting to Denver for the Dodge Power Brokers Mile-High Nationals. We've been able to build upon our data, and Dickie Venables [crew chief] has been putting a great car underneath me,” Hagan said. “We'll be taking a different car combination to Bandimere in regard to the motor, clutch, and blower. You can wick your blowers up, and the compression is crazy with the elevation. We have a great car we won there with last year, so we put that on the shelf, didn't touch it, and we're going to bring it back out and put it on the race car. I look forward to having a successful weekend in Denver, which is what we need to do. With it being a Dodge Power Brokers race, we want to give them a strong showing."