Division 5 Director Rob Park ready to step away: 'It's been a great, great career'

Division 5 Director Rob Park, NHRA’s longest-tenured current division director, will step down from those duties soon to spend more time with his family while simultaneously taking on other roles within the NHRA.
18 Nov 2022
Phil Burgess, NHRA National Dragster Editor
News

For more than 25 years, Rob Park has overseen NHRA’s vast Division 5 territory, a region covering more than 780,000 square miles, but NHRA’s longest-tenured current division director will step down from those demanding duties soon to spend more time with his family while simultaneously taking on other roles within the NHRA.

Park, just the third Division Director in the long and storied history of the West Central Division, took over the reins in December 1996, replacing Charlie Harmon, who ran the division for just two years after succeeding legendary Darrell Zimmerman, the division’s original director from 1959 through 1994.

Park originally had planned to retire two years ago, but he decided that his experience could help NHRA better navigate the choppy waters brought on by the COVID-19 pandemic, but thinks the time is right now. 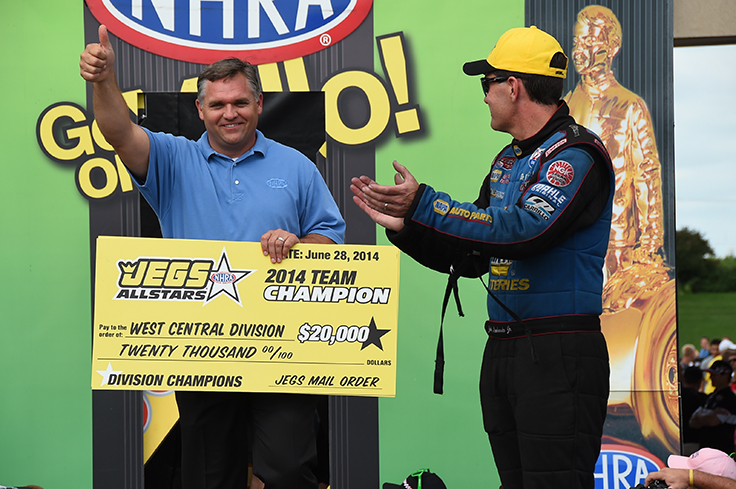 "[Original Division 4 Director] Dale Ham once told me that I’d know when it was time, and I feel like it’s time to turn it over," he said. "I will still be involved to help with the transition and help mentor the division directors."

Park, 51, has been in the drag racing game since he was 8 years old, and family friend Chuck Harmon, who ran Kansas City Int'l Raceway, offered him a job in 1979 handing out free Bic disposable shavers that were part of a sponsorship package for NHRA legend Kenny Bernstein.

“I handed out Bic shavers for four days,” he remembers. “I did exactly what I was told to do and never asked for anything. And Chuck came to me and asked me, ‘Do you want to learn this business?’ So, that's when I started learning the sport. He would take me to radio buys. He’d say, ‘Sit there and listen because you’ve got two ears and one mouth for a reason.’ His dad, who we called Grandpa Harmon, would pick me up every morning at six o'clock during the summer. We'd go open the racetrack, work all day, then close everything up at night. I went from handing out Bic shavers to parking cars and working the E.T. shack. I worked my way up until I was managing the racetrack. 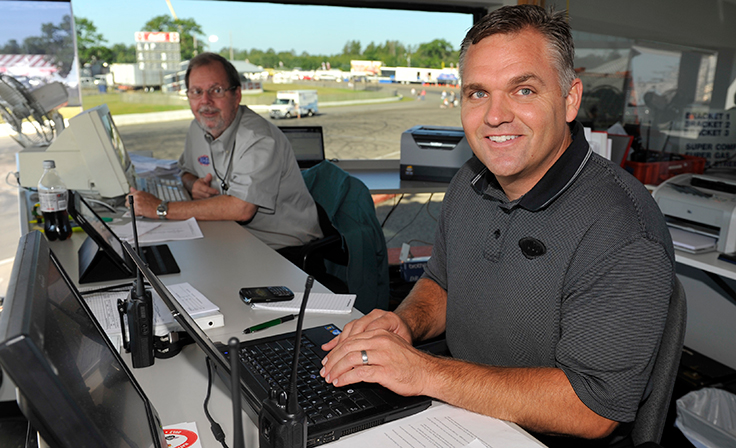 “In 1995, I bought a 50% stake in the racetrack with a partner, Jeff Martin, Chuck Harmon’s son-in-law. We did everything we could to make it better, and we were both working other jobs. We were eating peanut butter and jelly sandwiches just trying to make it, doing the right thing for the racetrack. We borrowed a bunch of money, put in concrete walls, we put a concrete starting line out to 330 feet, we resurfaced the track and the pits.”

Eventually, after a long fight with the city of Kansas City that ended with costly legal bills, Park sold the racetrack in 2006, but then ended up buying it back with new partner Chris Payne after the new owner died. The track got another four years before the city forced eminent domain, and the track was permanently closed. 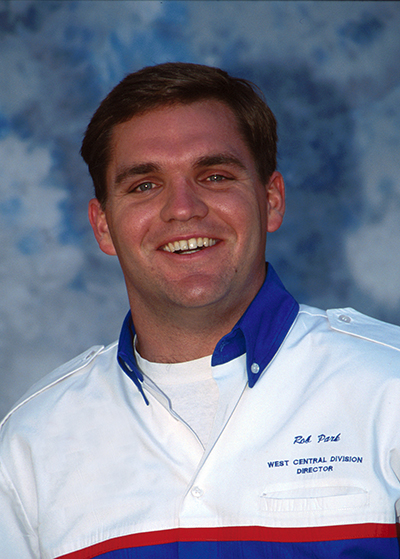 Park was already well into his tenure as NHRA division director by then, a relationship that started back in 1989 when he worked at the staging lanes at Division 5 events for Zimmerman. He met Gene Bergstrom by way of Zimmerman at a Division 5 track operator meeting, and Bergstrom later offered him the assistant division director job in Division 3, but he was a junior in college and playing college football, so he respectfully declined. Park also worked in the NHRA Tech Department before and after his racetrack’s season, and that work, along with the accolades that poured forth from Zimmerman and track operator John Bandimere Jr., soon had Park on NHRA’s radar.

After Zimmerman retired, Harmon – the son of the Kansas City dragstrip owner – took over, but NHRA soon offered him the job to help lead National Trail Raceway’s resurrection, and Park was offered the job and joined a division director lineup that included Greg Xakellis, Bill Holt, Jay Hullinger, Craig Hutchison, Gordy Harthorne, and Ned Walliser, all of whom took the young DD under their wings.

Those early days weren’t always easy, in an era before better electronics and better track equipment.

“We didn't have [traction-laying tire] rotators back then, and we would drag a tire on a chain behind the pickup truck,” he remembers. “The racetrack was slick, and there were bald spots, and you'd have oildown. We would sometimes have to buy kitty litter from the store and grind it in with our feet to clean up oildowns. And the timing system wasn't nearly as reliable as it is today. You always had some controversy around, but you learned from that.”

During his long tenure, Park’s leadership helped carry Division 5 to many new heights, but he’s most proud of the atmosphere that he helped foster.

“Safety has always been my No. 1 thing, and we have a very, very good history and safety record,” he said. “That’s always been our goal with our entire staff. No. 2 was to be fair. We wanted a safe, fair race for our customers to come out and race. The thing that I liked most in our division is the camaraderie. It's a brotherhood, a family atmosphere where everybody's just generally friendly and trying to help each other out. And I think the team that I've helped assemble in the division throughout the years, including Bob Blackwell, who is retiring completely at the end of this year after a storied career in drag racing, has helped with that.

“I think that NHRA giving me the ability to take on some of the younger kids and help train them and move them up throughout the sport — people like Matt [Levonas, who is the current Division 6 Director], Sara [Walker, now NHRA Senior Manager of Sportsman Racing], and Travis [Hilton, who joined the management team at Heartland Motorsports Park] — was good for the next generation of the sport.”

Park was also instrumental in helping rescue one of his division’s hallmark facilities, Heartland Motorsport Park, from potential foreclosure in 2015, after a change of ownership.

“It was in very real jeopardy of closing down, so I went to [NHRA leadership] and said, ‘Hey, if this place closes down, it's probably never going to open again. Let's go in and run this track ourselves to save it. I know we can do it. I ran a racetrack for whatever it was 20 years, I know how to do the water and the toilets, and I know how to do all that stuff, and everyone got on board to get it ready for the race.’ I mean, we had weeds 10 feet tall, and there were all kinds of past-due bills. Collectively, all of us went in there, and we ran a national event. Then we went in and ran a double divisional race, two bracket events, so the E.T. guys would be eligible for the E.T. Finals. We resurrected that track, and then the next year, Chris Payne came in and bought it and still owns it.

“It wasn't just me, it might have been my idea, but collectively NHRA and everybody chipped in — especially the Safety Safari — and we did save that for that racetrack. That's our mission: To protect and preserve the sport of drag racing. So, that's what we did. 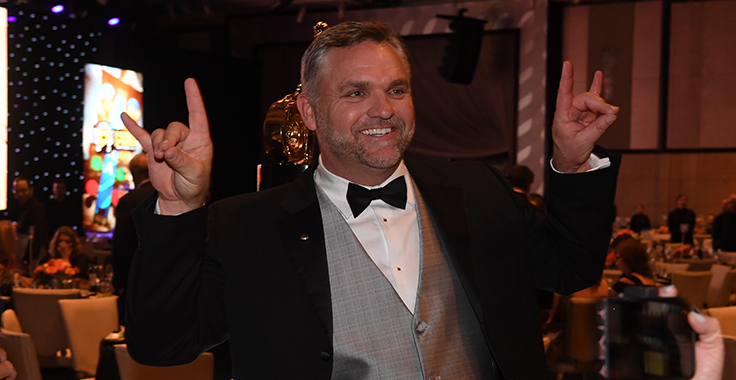 “It's been a great, great career, not just as a DD but because of all of the people I’ve met, from the racers to the track operator and everyone within NHRA. Probably the best years of my DD career were when Buster Couch was monitor [control] and Zim was staging monitor, and I got to go sit in between them and hear the stories and just watch those guys run the race. It truly was something special.

“I talked to Zim until his last day, and he was just the man to me. He was special. NHRA is a great company, and I love the sport. When you start something when you're 8 years old, it becomes part of what you are and what you do.”