Despite "Big Jim's" absence this weekend, the Dunn legacy will roar on in Seattle

Jon Dunn already wears a lot of hats on the nitro Funny Car team founded by his famous father, “Big Jim" Dunn, decades ago, but he’ll add another this weekend as crew chief as his father remained at home to be with his wife and Jon’s mother, Diane, who has contracted COVID-19.
29 Jul 2022
Posted by NHRA.com staff
News

Jon Dunn already wears a lot of hats on the nitro Funny Car team founded by his famous father, “Big Jim” Dunn, decades ago, but he’ll add another this weekend as crew chief as his father remained at their Southern California base to be with his wife and Jon’s mother, Diane, who contracted COVID-19 early in the week. Granddaughter Johnna, a nursing student, also elected to stay home to help, meaning that Jon will be left to carry on the family legacy at Pacific Raceways, a venue where his father has raced his Funny Car since the 1970s.

“It was a family decision that Johnna would stay home with her grandma this weekend to take care of her,” said Jon, “As hard as it was getting on a plane to head to a race without them, I knew that I had a job to do and my mom would be in good hands. It’s not the same without all of them here. Racing is something that we all love to do together.”

Other than a two-race absence while the senior Dunn dealt with a medical scare of his own, the Dunn family car has been at just about every NHRA national event for the past 30 years, and Jim and Diane, married 47 years now, are a constant and familiar sight, and this is the first time that Jon will be there without his dad.

“I asked him on Wednesday if I should just bring the rig home [from Sonoma],” said Jon, “and he said, ‘Go you'll be fine.’ I said ‘I don't feel good going without you,’ and just said, ‘You’re more than capable.’ " 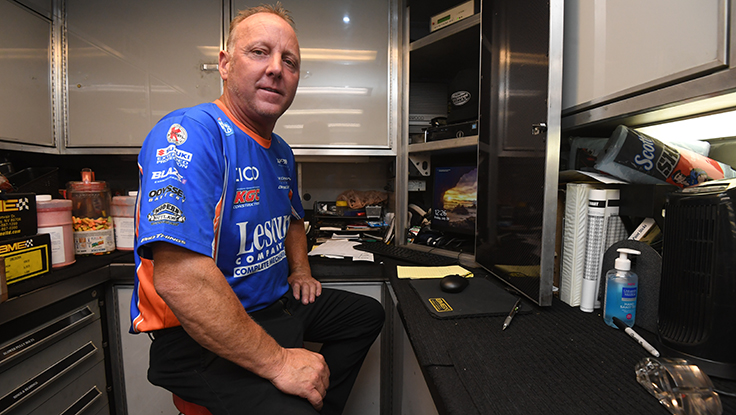 That’s not to say that “Big Jim’s” hands won’t be all over the tune-up of Jim Campbell-driven, Lesecure-backed Funny Car this weekend as father and son will communicate via cellphone and FaceTime to discuss the setup.

“He’s been doing a lot enough so that when I put the screen up on there, he could say, 'OK, left corner, this one, this one, and this one.’ I'll plug in like the barometric pressure and stuff like that, but it’s so ingrained in him, he'll say, 'OK, what's this one? What's this one, four down on the right-hand side? Keep that one.’ We're gonna run today and then I'll call him when we're done and talk about tomorrow.

Jim Dunn drove his own Funny Car for years and was a popular draw at the Seattle track's signature races, such as 64 Funny Cars, and twice was runner-up at the NHRA Fallationals (1977 and '79) and later tuned his driver, Tony Bartone, to the victory at the 2008 event.

The senior Dunn, 88 and still going strong, and the Dunns both plan to be at the next event, the Menards NHRA Heartland Nationals presented by PetArmor in Topeka.

"Going to three or four in a row is tough on everybody, and my dad has lived so long because he’s so in tune with his own body, and [my parents] take excellent care of each other, and the longevity of their relationship is because they always put each other first.”