The Mile-High No Time Big Tire Shootout, one of the highlights of last year’s Dodge Power Brokers NHRA Mile-High Nationals, will return to Bandimere Speedway on Friday, July 15 and Saturday, July 16. The event will once again feature heads-up competition in an elite eight-car field of the Midwest’s quickest and fastest street cars. The race will be contested on an eighth-mile course, and because it uses a grudge-racing format, elapsed times won’t be displayed on the scoreboard. 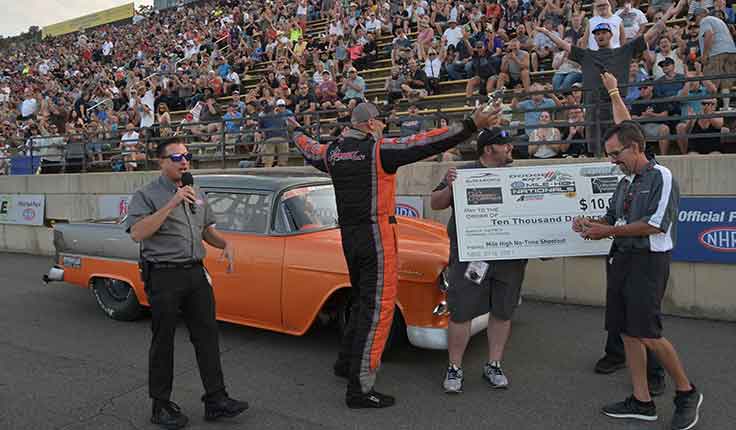 It’s likely that no one enjoyed last year’s event more than Shawn Fink, who drove his show-quality ’55 Chevy to an impressive victory. Fink, of Casper, Wyo., added the Mile-High Nationals title to an already impressive body of work that includes success in “Drag and Drive” events such as Hot Rod Magazine’s Drag Week, Rocky Mountain Race Week, and Sick Week. Fink has also been featured on television programs such as Pinks All Out and Street Outlaws.

Fink will be joined by an All-star cast that includes last year’s runner-up, Lance Knigge, in his ’67 Nova, Kevin Guthrie’s ’62 Bel Air, Nick Johanns’ ’10 Camaro, Brett Meyer’s ’69 Mustang, Kyle Gardner’s ’68 Camaro, and Brandon McBride’s ’06 Corvette. Fink figures to be one of the favorites this year, but he knows that defending his title won’t be easy.

“Who’s going to be the toughest competition we face? All of them. All of them are tough,” said Fink, who’s vintage Chevy is powered by a turbocharged 526-cid Hemi-headed Chevy from Sonny’s Automotive. “Look at the other seven cars that are going to be there and none of them are slow. I’ll say this, I won’t have the fastest car there, but I feel like I can string together a few good runs, which is always a challenge. My car is all-steel, and it’s the only true street car in the field. No one else does Drag and Drive events.

“This is going to be all about who can manage the power best,” Fink said. “Bandimere is a challenging track because of the altitude, but we race there fairly often. It’s also 5,500 feet where I live in Wyoming, so I’m used to altitude racing. If I have one advantage, that’s it, but then again, most of these guys race at altitude.”

For Fink, the highlight of last year’s event was not just winning the special eight-car exhibition but being able to do so in front of a packed house of enthusiastic fans. Based on the popularity of the event, he expects a similar response this time. 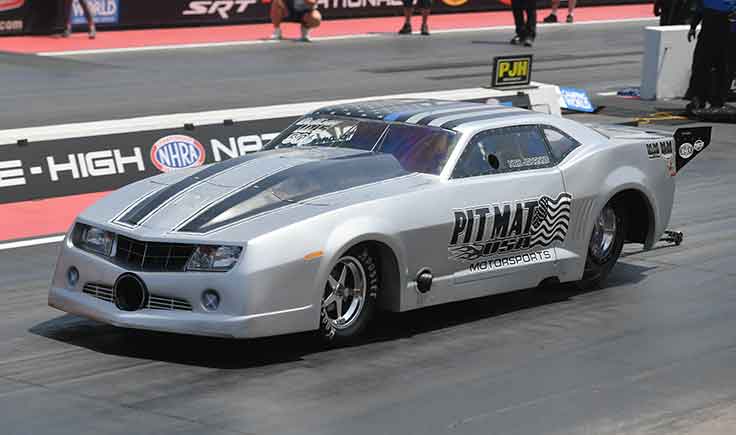 “I love the exposure that [this race] gives to street cars and the whole Drag and Drive scene,” Fink said. “Ultimately, as a racer, I think it’s a blessing to be able to perform and compete at this level. I love being able to race with all of today’s [NHRA] heroes and be able to share some of that spotlight. I think it’s great that the Bandimere family has an open mind for these things as well. I’ve raced all over the country, so I know this facility is one of the best. It’s just first-class.”

The Mile-High No Time Big Tire Shootout will feature two rounds of qualifying on Friday at 2:45 p.m. and 6:15 p.m. with final eliminations set for Saturday, July 16, beginning at 1:45 p.m.