Championship hopes could hinge on success at NHRA Nevada Nationals

With championship dreams on the line, the stars in the NHRA Camping World Drag Racing Series will look to hit it big on Oct. 27-30 at The Strip at Las Vegas Motor Speedway, as the NHRA Nevada Nationals marks the penultimate race in the Countdown to the Championship playoffs.
24 Oct 2022
Posted by NHRA.com staff
News

With championship dreams on the line, the stars in the NHRA Camping World Drag Racing Series will look to hit it big on Oct. 27-30 at The Strip at Las Vegas Motor Speedway, as the 22nd annual NHRA Nevada Nationals marks the penultimate race in the Countdown to the Championship playoffs.

It is the 21st event of the 2022 season and the fifth stop in the six-race NHRA playoffs, as a jam-packed weekend in Las Vegas will have major championship implications. The championship intensity will be apparent as teams in Top Fuel, Funny Car, Pro Stock, and Pro Stock Motorcycle leave it all on the line at one of the final races of the season.

Fans at The Strip at Las Vegas Motor Speedway will be treated to an unbelievable weekend of action, starting with must-see qualifying action on Friday and Saturday, and then an unforgettable day of eliminations on Sunday as drivers look for playoff magic in Las Vegas. 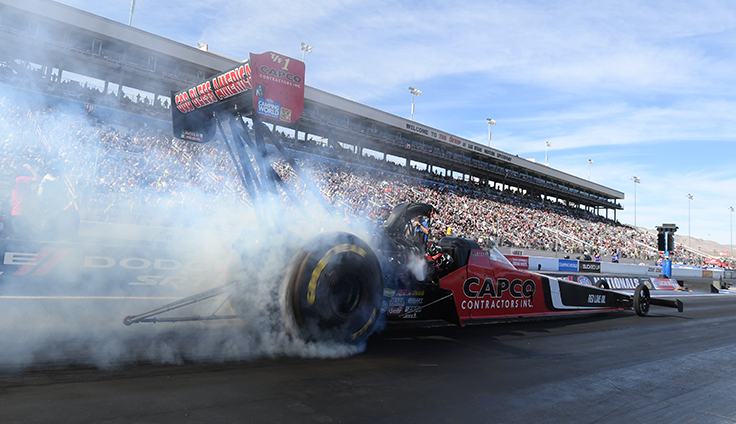 Torrence swept both races in Las Vegas a year ago, picking up his 50th career Top Fuel win last fall at the NHRA Nevada Nationals. The four-time defending world champ will be determined to get his sixth victory at the facility – which would put him behind only Tony Schumacher’s eight for most in Top Fuel history – but it won’t be easy in the loaded class. Along with points leader and Texas NHRA FallNationals champ Justin Ashley, other top contenders include Brittany Force, who has four wins in 2022, five-time Vegas winner Antron Brown, Mike Salinas, veteran Doug Kalitta, Leah Pruett, Josh Hart, and Clay Millican.

In Funny Car, Pedregon would love nothing more than to pick up the late-season win and cash in on his first victory of the season. But Pedregon will have his work cut out for him facing off against a star-studded field that includes points leader Robert Hight, who has a career-best eight wins in 2022. He’ll try for his sixth win in Vegas to tie teammate John Force and Ron Capps for the most at the facility and move closer to a fourth world championship while facing off against defending world champ Capps, who won the spring race in Las Vegas and the Texas NHRA FallNationals, Matt Hagan, who has won the event three times, Bob Tasca III, Alexis DeJoria, J.R. Todd, and Tim Wilkerson. 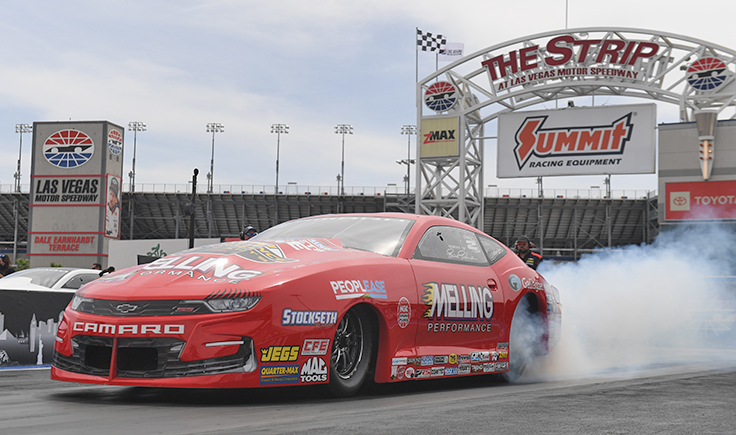 In Pro Stock, points leader Erica Enders has dominated in Las Vegas in recent seasons. With a huge lead, Enders could conceivably lock up her fifth world title in Vegas, where her nine victories are the most for any Pro driver in NHRA history. That includes her spring victory at the track, and Enders has won at least one race in Vegas for the past four years. She’ll look to make it a sweep in 2022 against a top-tier field that includes defending world champ Greg Anderson, who has eight Vegas wins, Aaron Stanfield, who won in Charlotte, Dallas Glenn, Troy Coughlin Jr., and Kyle Koretsky.

Pro Stock Motorcycle’s Steve Johnson won for the first time in Las Vegas last year, doing so at the NHRA’s 1,000th race, and the veteran would love another late-season victory after two wins early this year, but he hasn’t won since May. Defending world champ Matt Smith is the current leader as he aims for a sixth world title, but a slew of challengers in the two-wheeled category includes Joey Gladstone, who has three wins this season, Angie Smith, Eddie Krawiec, Jerry Savoie, and Angelle Sampey.

The NHRA Nevada Nationals also will feature thrilling competition in the NHRA Lucas Oil Drag Racing Series, which includes some of the sport’s top drivers, and the NHRA Summit Racing Series Finals, where national champions will be crowned, including the first Electric Vehicle (EV) national championship in NHRA history. The weekend will also include action in the thrilling Nostalgia Funny Car class, while fans can watch a spectacular jet dragster exhibition from Team “Muy Caliente and "Ice Man" after nitro qualifying on Friday and Saturday.

Pro Stock School with veteran Matt Hartford takes place on Friday, while fans can attend Nitro School the next day to learn more about how the cars operate and reach their thrilling speeds. There will also be autograph sessions on Friday at the Toyota Racing Experience with Toyota-sponsored drivers, as well as at NHRA Member Hospitality, which will feature riders in Pro Stock Motorcycle.

Race fans at The Strip at Las Vegas Motor Speedway can enjoy the special pre-race ceremony that introduces and celebrates each of the drivers racing for the prestigious Wally on Sunday and includes the fan-favorite SealMaster NHRA Track Walk. The final can’t-miss experience of any NHRA event is the winner’s circle celebration on Sunday after racing concludes, where fans are invited to congratulate the NHRA Nevada Nationals event winners.

As always, fans also get an exclusive pit pass to the most powerful and sensory-filled motorsports attraction on the planet in Las Vegas. This unique opportunity gives fans a unique chance to see teams in action and service their hot rods between rounds, get autographs from their favorite NHRA drivers, and more. Fans can also visit NHRA’s popular Nitro Alley and Manufacturers Midway, where sponsors and race vendors create an exciting atmosphere that includes interactive displays, simulated competitions, merchandise, food, and fun for the entire family. The new Pep Boys midway display includes tire-change challenges, oil-change challenges, a slot car track, and much more, adding even more excitement to the midway.

To purchase tickets to the NHRA Nevada Nationals at The Strip at Las Vegas Motor Speedway, call 800-644-4444 or visit www.lvms.com. Children 12 and under are admitted free in general-admission areas with a paid adult.