Canadian Motorsports Hall of Fame member Barry Paton, who made the successful transition from driver to NHRA nitro-racing mentor, passed away Oct. 16. He was 79.

Paton began his drag racing career in 1964 in a ’58 Plymouth Fury and graduated from Super Stock to Competition eliminator and then into Top Alcohol Funny Car in 1986. His first Funny Cars were hand-me-down nitro cars – the “Fighting Irish” Camaro and Paul Smith’s “Entertainer” – but he quickly earned a reputation as a quick and capable competitor. 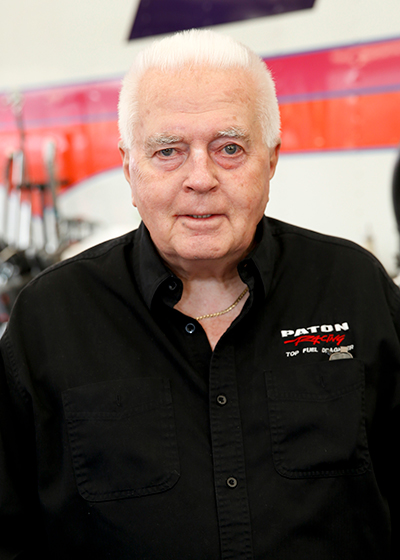 In 1989, he became the first Canadian to qualify No. 1 at NHRA’s Le Grandnational in Montreal. During the winter of 1990, son Todd took over the wheel and was a steady performer in NHRA and IHRA competition and won the IHRA world championship in 1993 and repeated the feat in 1995.

In 1996, the team shifted its focus to the NHRA and became the first Alcohol Funny Car to break into the 5.7-second zone at that year’s U.S. Nationals and went on to win NHRA’s biggest event and would win three more national events. Barry Paton was inducted into the Canadian Motorsports Hall of Fame in 2002.

The team turned their primary focus to Top Fuel, and became known for having a safe, dependable car in which new drivers could learn and license and experienced drivers could rent for occasional outings. Among those to buckle into the Paton Top Fuelers over recent years were Cameron Ferre, Ike Maier, Keith Murt, Paul Noakes, Tim Boychuk, Dan Mercier, Shawn Reed, Jeff Chatterson, and, of course, his own son. The senior Paton passed away unexpectedly after last weekend's Texas NHRA FallNationals, where Murt drove the Paton Racing entry.

Although the team had planned two more outings this year, those have been canceled, but son Todd insists that the team and their services will return in 2023.

“My father built this legacy, and it’s up to us to continue it,” he said.