Mercier Racing is currently planning on a six to eight race schedule that will start with the Virginia NHRA Nationals, May 13-15.

“We’re so excited to have Amalie joining us for 2022,” McMIllen said. “The pandemic caused us to have to pause our contract with Amalie. So, having them on the side of our Mercier Racing dragster just feels right. Dan runs a family-friendly team that fits so well into our family racing roots and the Amalie Family.” 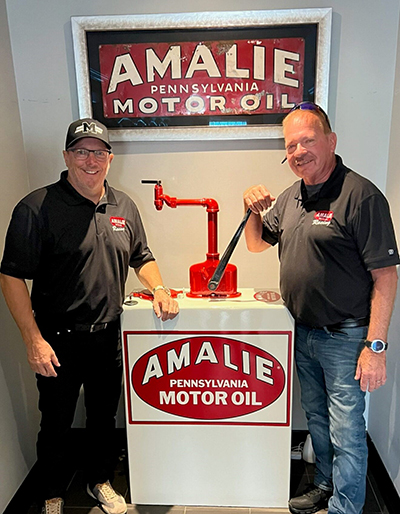 “Amalie, a family-owned company, manufactures and blends a wide variety of high-quality, top-performing lubricants for automotive and industrial applications,” said Harry Barkett, president and CEO of Amalie. “Both Terry McMillen and Dan Mercier are considered part of the extended Amalie family.

“Terry has been a friend and the pilot of the Xtermigator for over 20 years, he is a true professional and competes with the highest level of intensity I’ve seen,” he continued, “Dan was a customer for years prior to becoming an Amalie distributor. He is a consummate businessman who is doing a tremendous job growing our brand north of the border, and we look forward to continued success on and off the track.”

Mercier is the owner of Alpha 3 in Montreal and is Amalie’s largest distributor in eastern Canada. Mercier has competed in A/Fuel and Top Fuel. He has raced a limited Top Fuel schedule with McMillen in the past and is looking forward to working with McMillen again.

“I am tremendously proud to be associated with Amalie Motor Oil,” Mercier said. “My team and I feel that wearing Amalie’s colors in 2022 is a sign of confidence from the management of this great company.”

Mercier’s relationship with Amalie goes beyond that of a sponsor and racer or even that of a manufacturer and distributor.

“I fell in love with Amalie’s products four years ago,” Mercier continued. “In the last 30 years, I tried several lubricant companies for my racing cars and the results were always the same; they were acceptable, but they never improved the performance of my cars in any meaningful way. To my great surprise, both in the Top Fuel and A/Fuel categories, Amalie’s oils have made a difference in our engines. For example, before our switch to Amalie’s lubricants, in the A/Fuel category, we changed the rod bearings every run and now we can easily do eight to 10 runs. This proves the incredible effectiveness of Amalie’s oil formulas. You have to visit the manufacturing plant and their laboratory to understand the scale of this company in North America and their commitment to quality and performance.”