There is a lot happening as NHRA speeds into what figures to be a very promising 2022 season, but we’ve managed to lock down 10 noteworthy storylines that every race fan should be following.
03 Jan 2022
Kevin McKenna, NHRA National Dragster Senior Editor
News

There is a lot happening as NHRA speeds into what figures to be a very promising 2022 season, but we’ve managed to lock down 10 noteworthy storylines that every race fan should be following. 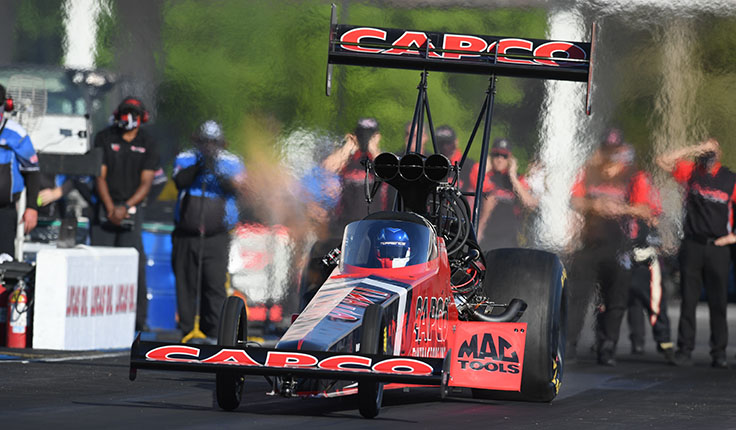 Steve Torrence may well win his fifth-straight Camping World NHRA Series Top Fuel title this season, but this much is certain; it won’t be easy.

Not that Top Fuel racing has ever been easy, but the bar has been raised for the upcoming season with the confirmed return of eight-time world champion Tony Schumacher, the expected return of past Rookie of the Year Austin Prock, and the emergence of several very competitive single car and/or part-time teams.

The aforementioned list has 14 names on it which begs that question; which four don’t finish in the Top 10? And that question doesn’t even begin to address the competitiveness of part-timers including Tripp Tatum, T.J. Zizzo, Alex Laughlin, Cameron Ferre, Krista Baldwin, Joey Haas, and a handful of others who typically make anywhere between 5 to 12 events a season. It's not unreasonable to think that several events could have a bump spot in the mid-to-low 3.7s this season.

Given what we know now, it’s fair to say the days of simply showing up at an event and qualifying are just about over and its going to take a lot of work to earn a coveted Top 10 spot.

THE DEBUT OF FACTORY X 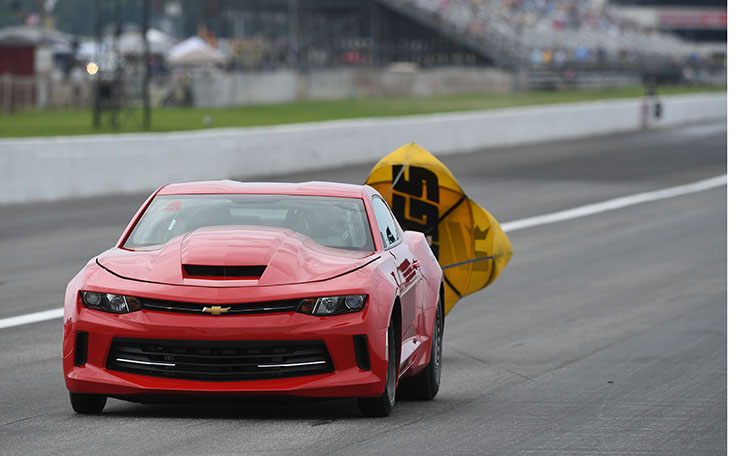 Shortly after the end of the 2021 season, NHRA released the online version of the 2022 Rule Book and it included the framework for an exciting new class that has come to be known as Factory X.

Designed for new-era muscle cars including (but not limited to) the Dodge Challenger, Chevy Camaro, and Ford Mustang, the Factory X class has some similarities to the already popular Constant Aviation Factory Stock Showdown but there are also some very significant differences.

Factory X cars will feature a “back-half” chassis and a 10.5-inch-wide rear tire. Uusing composite components, they will also be approximately 800 pounds lighter than their Factory Stock counterparts which means they are expected to be six-second, 200-mph race cars from the start. Perhaps the most intriguing difference is the mandatory use of a clutch and manual transmission, which should add an additional degree of difficulty for drivers.

Since news of the Factory X class first broke, there has been a significant amount of interest from would-be racers, manufacturers (both domestic and foreign) and potential sponsors. At the PRI Show in December, the NHRA booth was flooded with inquiries which leads one to think that there is something special brewing.

In the short-term, Factory X will be a part of Comp Eliminator with exhibition events planned as soon as there are enough cars built to fill them and based on early reports, there will be plenty of cars built before the end of the 2022 season.

A RETURN TO PHOENIX, RICHMOND, AND SEATTLE 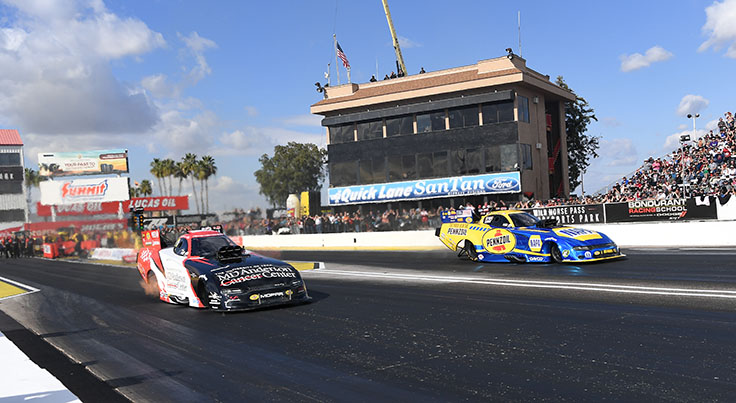 The COVID-19 pandemic has interfered with the Camping World NHRA schedule for the last two seasons and fans in Phoenix, Richmond, and Seattle have taken the brunt of it.

Wild Horse Pass Motorsports Park in Phoenix last held an NHRA event in February of 2020 while events at Virginia Motorsports Park and Pacific Raceways have been off the Camping World series calendar since 2019. Now, all three races are set to return in a season that is expected to feature 22 national events across the U.S.A. along with the JEGS SPORTSnationals in Columbus.

The Phoenix event is scheduled for Feb. 25-27, one week after the traditional season-opener in Pomona. The Virginia Nationals will return on May 13-15, as the tour returns to the East coast for additional events spring/summer in Charlotte, Epping, and Bristol. Seattle will also take its traditional place on July 29-31. as the anchor leg of the Western Swing after the races in Denver and Sonoma.

Nitro racers will compete in all 22 events while Pro Stock teams have an 18-race calendar and Pro Stock Motorcycle team will participate in 16 events. Everyone in the sport wants to see a return to normalcy this season and the return of the Phoenix, Richmond, and Seattle events will go a long way towards securing that goal. 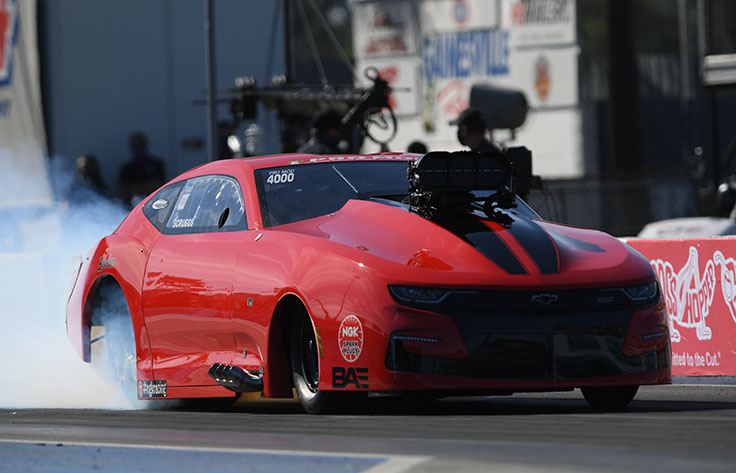 It’s always nice to have options and that is especially true of the NHRA Pro Mod Drag Racing Series, which is well-known for its diversity. NHRA Pro Mod racers have a choice of power-adders including superchargers (conventional and centrifugal), turbochargers, and nitrous oxide. This year, Pro Mod competitors will also be permitted to use screw-style superchargers, similar to those used in Top Alcohol Funny Car and Top Alcohol Dragster.

It’s extremely likely that the new addition of the screw supercharger attracts new competitors to the Pro Mod class while several existing competitors are rumored to be making the switch. 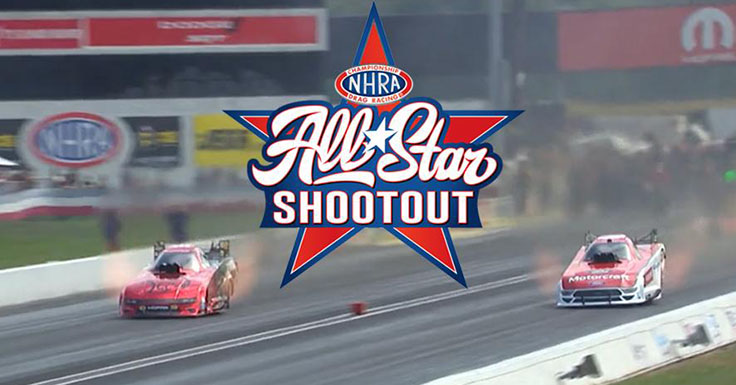 First made public last September during the Dodge/SRT U.S. Nationals at Indy, the NHRA will once again host a specialty race amongst the stars of the NHRA Camping World Drag Racing Series nitro categories. Fans will be treated to two NHRA Allstar Shootout events in 2022, with Top Fuel taking ceneter stage at the Amalie Motor Oil NHRA Gatornationals, March 10-13, with Funny Car following at the prestigious Dodge//SRT NHRA U.S. Nationals, Aug. 31 – Sept. 5.

The NHRA Allstar Shootout events will feature competition amongst the top eight NHRA Top Fuel and Funny Car drivers based on qualifying results this season. Each shootout will utilize a call out format with the No. 1 seed getting their first choice of opponent.

The Gainesville Top Fuel event figures to be particularly interesting since racers will have just two opportunities to qualify in Pomona and Phoenix. The final payout has yet to be released but each event is expected to reward the racers with a prize pool in excess of $100,000.

ANOTHER ROUND OF KB RACING VS. ELITE MOTORSPORTS 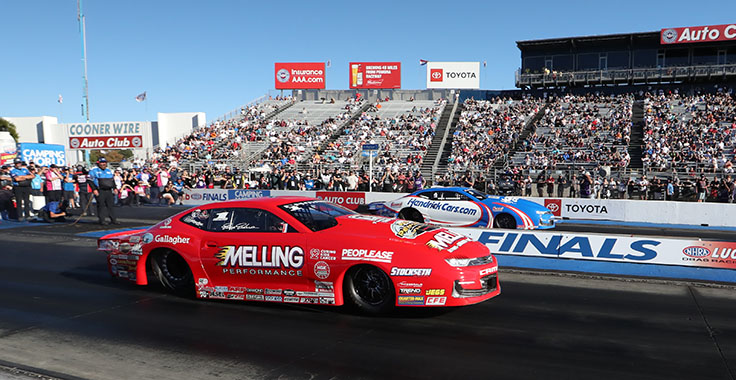 The sport of NHRA Drag Racing was built on rivalries and there is currently none more intense or fascinating than the battle between Pro Stock powerhouses KB Racing and Elite Motorsports.

Most times, the KB vs. Elite rivalry is civil, but there have been instances where its become heated and there is an obvious reason for that. Just one team can win the championship which means the other will inevitably be disappointed. Given how intensely competitive each team is, expect fireworks anytime a KB team car goes up against a member of the Elite squad.

THE PROSPECT OF NEW WINNERS 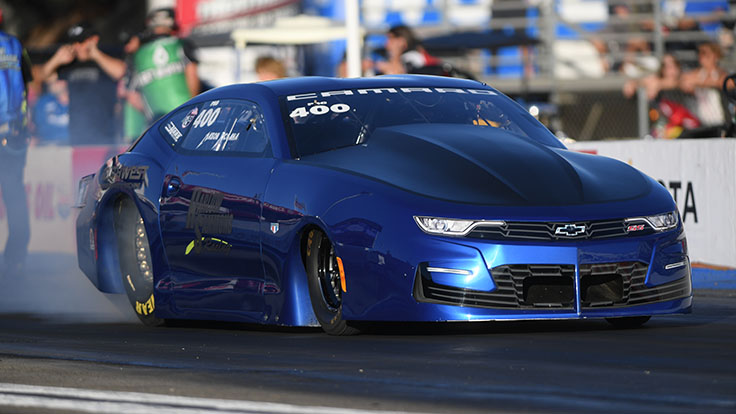 Last year, Josh Hart, Dallas Glenn, and Kyle Koretsky joined the list of first-time pro winners and there will almost certainly be others to join them in 2022.

Hart made an immediate impact when he won the season-opener in Gainesville, joining a short list of drivers who have won their first professional start. He later went on to win again in Charlotte to prove it wasn't a fluke. Glenn was impressive in his three victories, leading to his selection as the Rookie of the Year while Koretsky also scored an emotional win at the Fall Charlotte event.

Now, who’s going to join the list of first-time winners this season?

The short answer is that there are many candidates and some of them could easily be considered overdue. The most obvious contenders for a first win would have to include Pro Stock racers Troy Coughlin Jr. and Mason McGaha, who have already had a considerable amount of success including Top 10 finishes last season.

There are a handful of other racers who already appear capable of achieving a victory including Top Fuel racers Tripp Tatum and Doug Foley, Funny Car drivers Chad Green and Paul Lee, as well as Pro Stock Motorcycle teammates Cory Reed and Joey Gladstone.

Some of the other drivers for whom a victory would not be a complete surprise include Krista Baldwin, Cameron Ferre, T.J. Zizzo, Bobby Bode, Jim Campbell, Tony Jurado, Jimmy Underdahl, Chris Bostick, Kelly Clontz, or any of the three Cuadra family team Pro Stock cars. 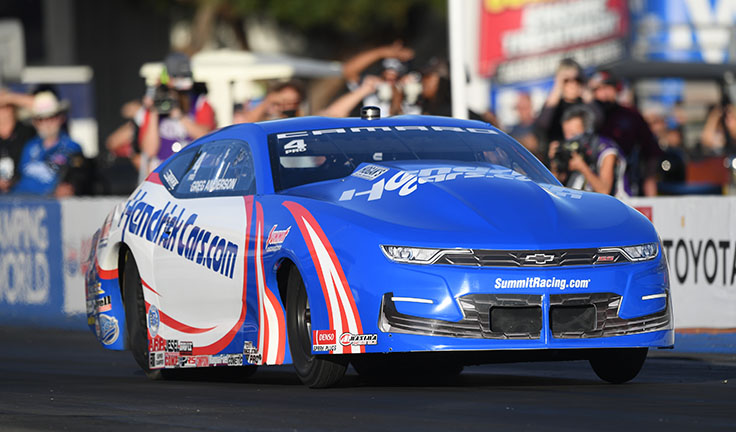 Anderson won five times in 2021 and his HendrickCars.com Camaro was arguably the best car in the class for the entire season so it’s difficult to imagine he won’t hit the pay window at least once this season.

After Anderson, who is next to 100 wins? Honestly, it might be a while. Warren Johnson remains on 97 wins and while he’s never officially announced his retirement, it’s safe to assume that if he didn’t race in the final event at his home track, Atlanta Dragway, the Professor of Pro Stock isn’t going to make a comeback. After that, Tony Schumacher sits on 85 wins, so he’s got a shot at 100, but won’t do it in 2022 unless he has a record-setting season. After that, Antron Brown and Ron Capps are tied at 68 wins so it would likely take several very solid seasons to even approach the 100-win mark.

THE RETURN OF TONY SCHUMACHER (AND HOPEFULLY, AUSTIN PROCK) 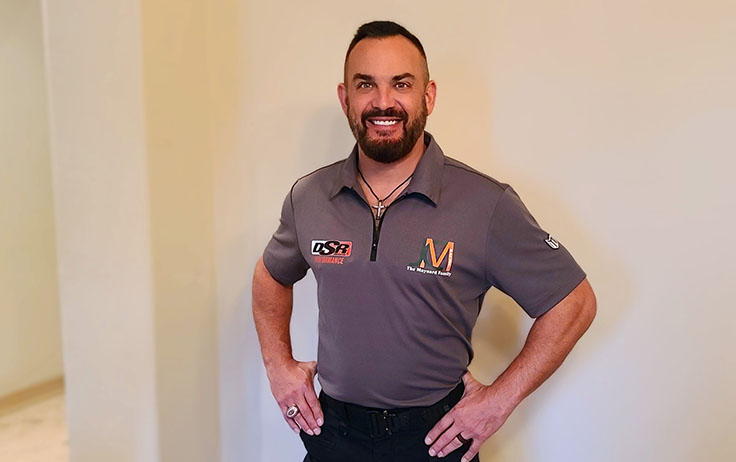 Other than a few sporadic appearances during the COVID-shortened 2020 season, NHRA fans haven’t seen much of eight-time world champion Tony Schumacher since his U.S. Army sponsorship ended in 2018. Late last season, Schumacher announced his return for 2022 with the help of the Maynard family. More recently, Schumacher announced the addition of Scag Power Equipment as a major sponsor for his return.

Schumacher’s return adds to a stacked Top Fuel lineup that could include a dozen or more full-time entries including reigning and four-time world champ Steve Torrence.

While nothing has been officially announced, it’s been widely rumored that Austin Prock will also make his return in 2022 as a member of the John Force team. Prock, who won the 2019 Seattle event on his way to the rookie of the year award, subbed for Clay Millican last year in Norwalk and reached the semifinals in his only NHRA appearance. 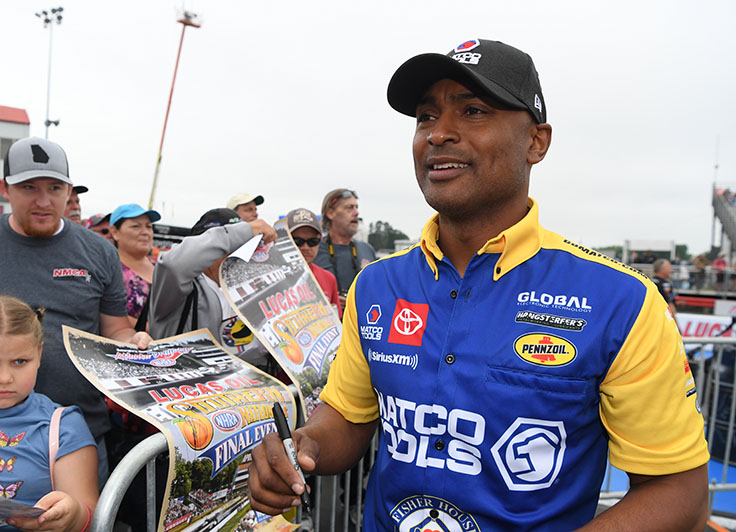 Since the end of the 2021 season, Antron Brown, Ron Capps, and NASCAR and IndyCar star Tony Stewart have thrown their collective hats into the ring as professional team owners in the Camping World NHRA Series.

Brown’s move from hired driver to team owner has been in the works for several seasons. The Three-time champion had intended to field his own team in 2021 but that was pushed back a year by the pandemic. Brown recently launched AB Motorsports, and he’ll continue to race his Matco Tools backed dragster along with crew chiefs Brian Corradi and Mark Oswald. Brown will also share an alliance with Justin Ashley’s Davis Motorsports team.

Capps announced his debut as a team owner shortly after winning his second Funny Car championship on the last day of the 2021 season. Capps has retained his championship crew including crewchiefs Dean Antonelli and John Medlen.

The new arrivals continue a trend of smaller, single and two-car teams finding success in a sport that was recently dominated by a handful of multi-car mega teams. That dynamic has changed largely due to the success of Torrence Racing, which primarily fields cars for Billy and Steve Torrence, although they have a long history of offering assistance to other racers.