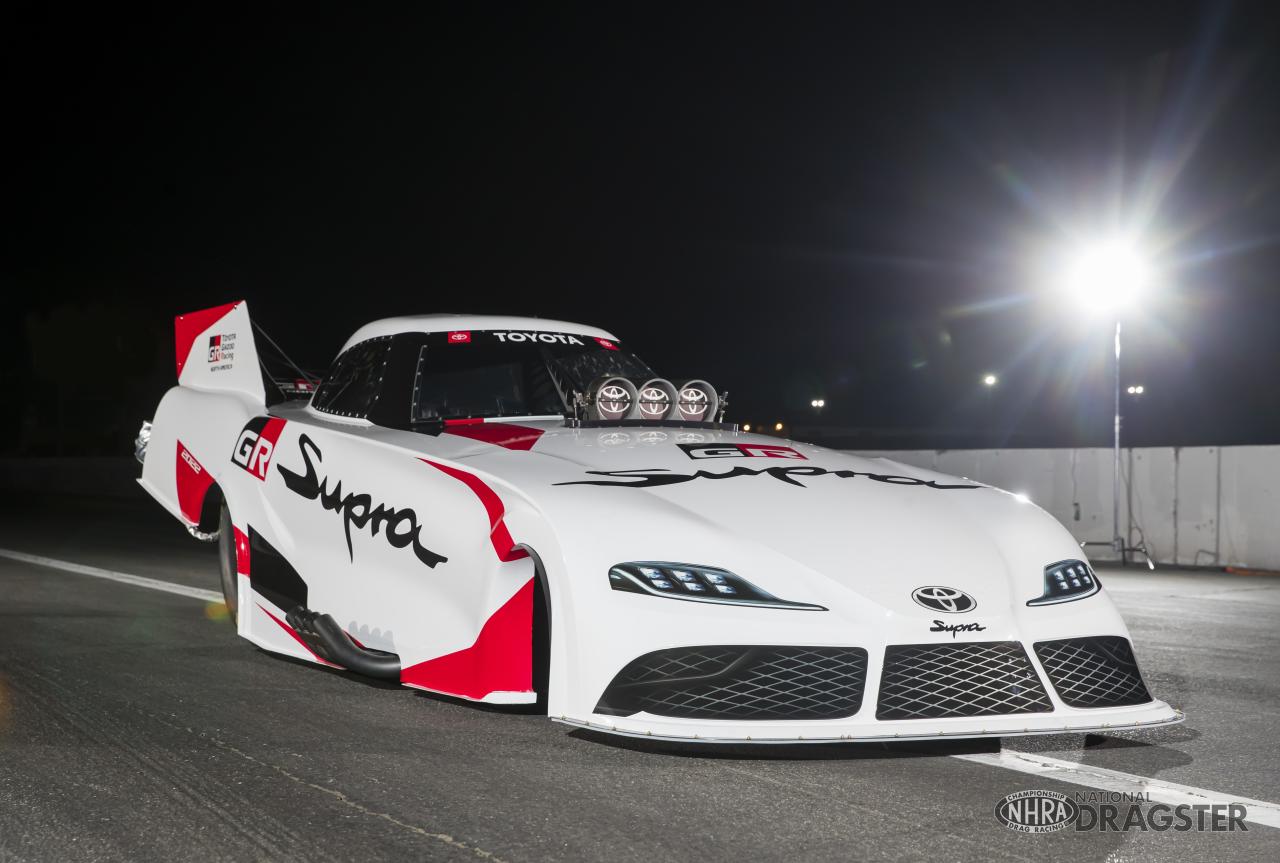 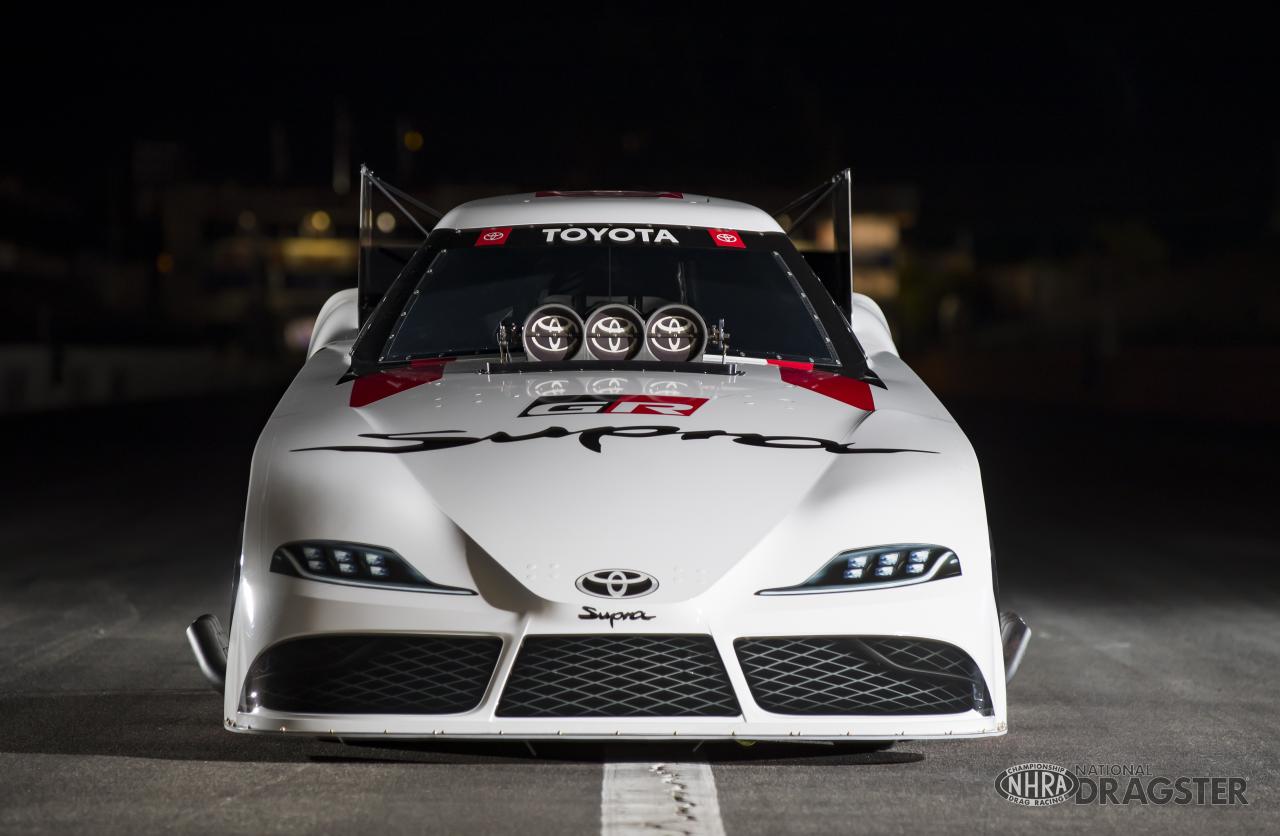 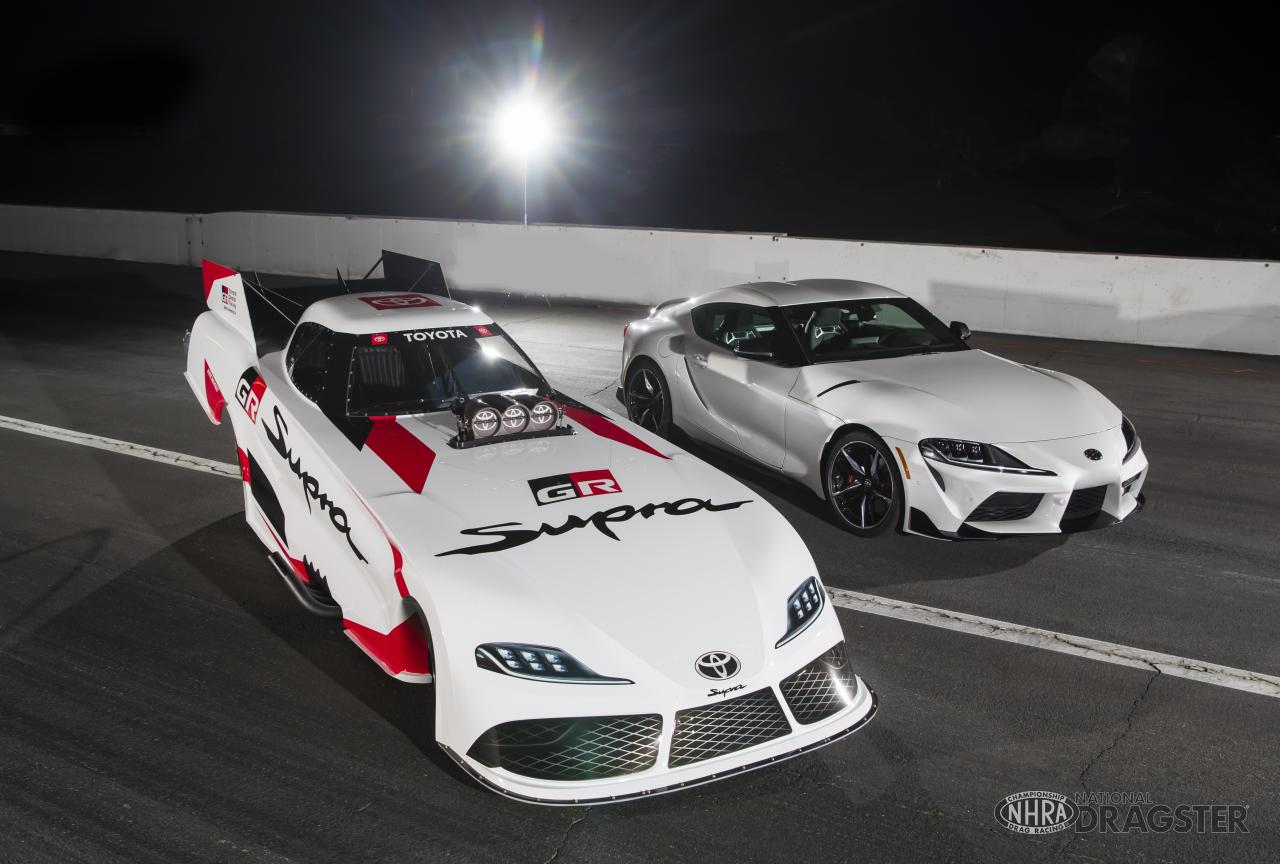 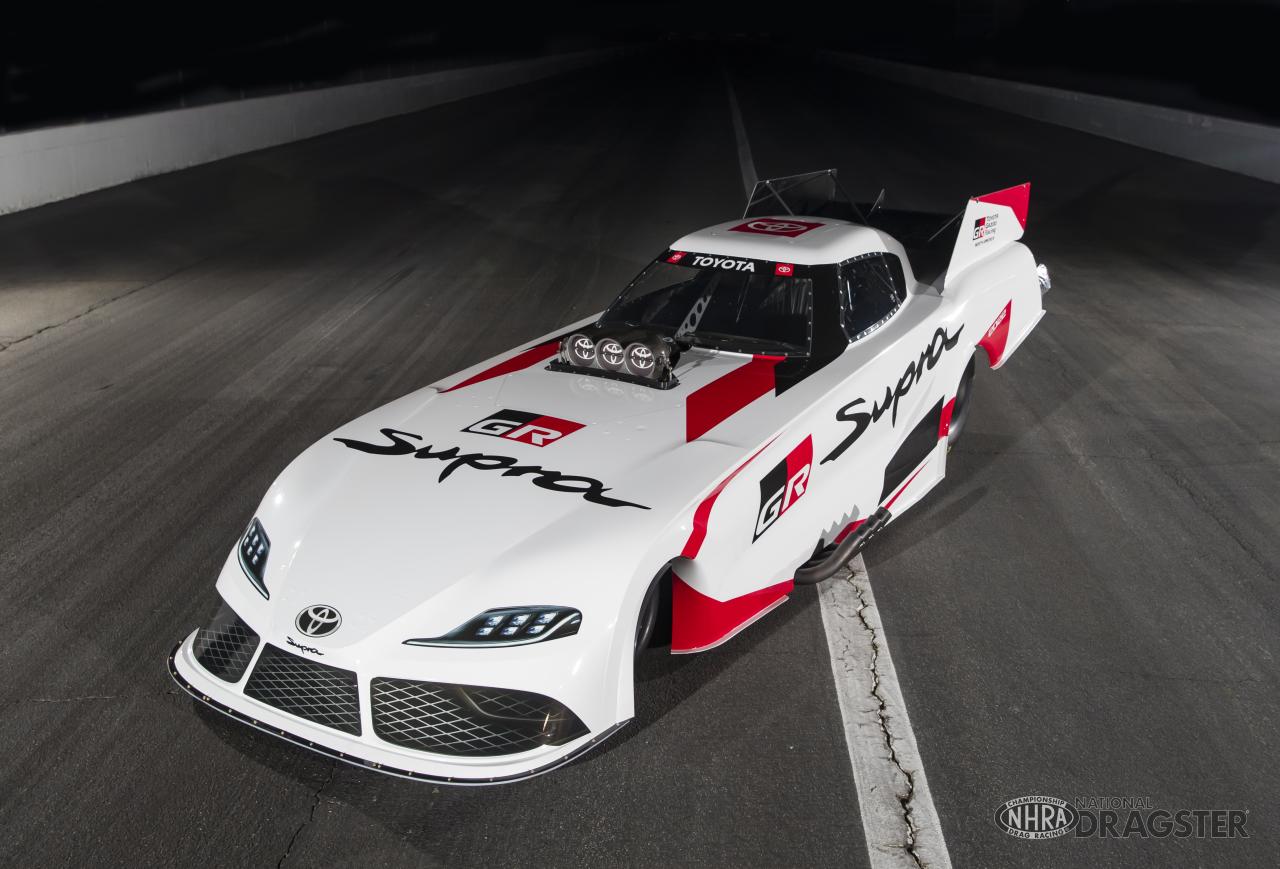 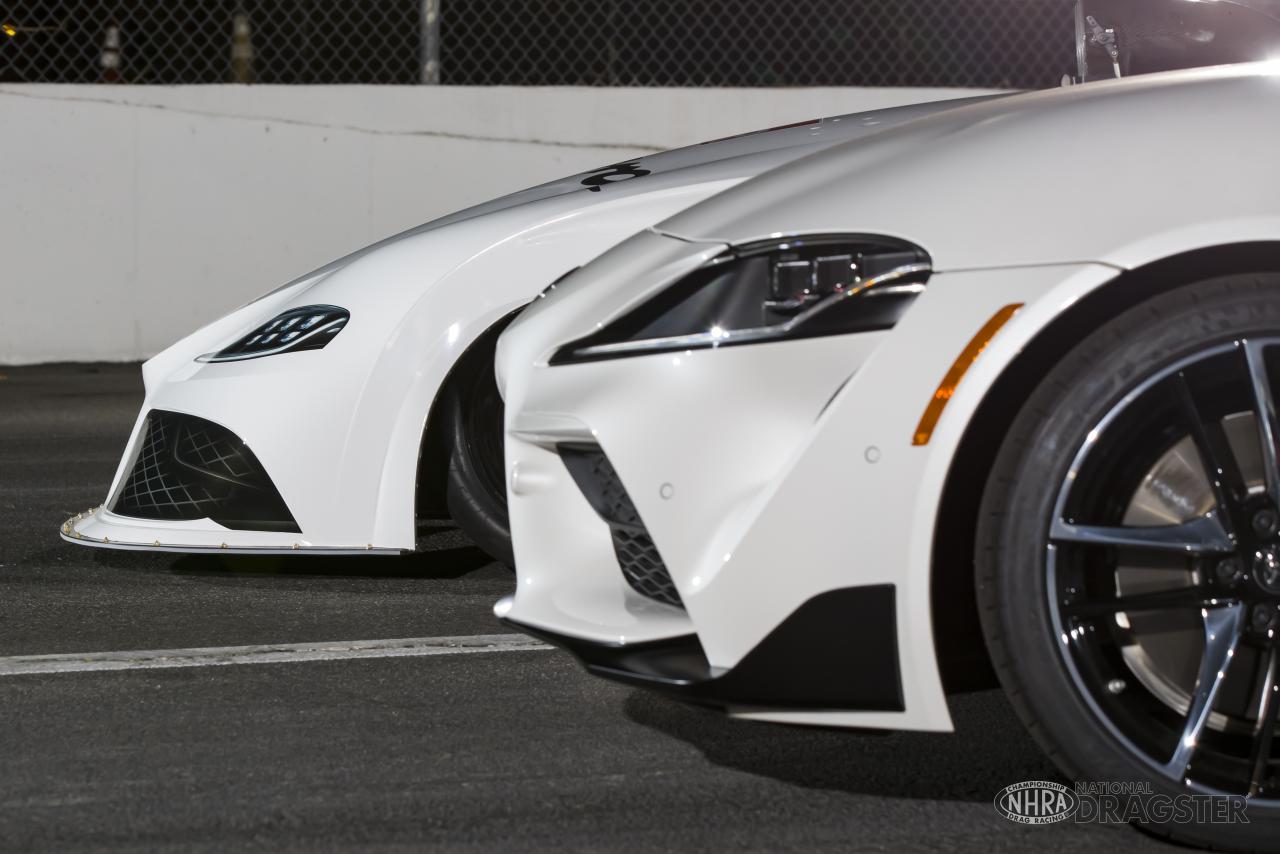 Toyota unveiled its new race car for the 2022 NHRA Funny Car season at the Auto Club NHRA Finals in Pomona.. For the first time, Toyota will campaign the GR Supra beginning with the season kickoff event in Pomona in February.

Toyota has competed with the Camry in Funny Car competition dating back to 2012. Prior to the Camry, the Toyota Celica and Toyota Solara were run.  The 2021 season has marked the 20th anniversary of Toyota’s official involvement in NHRA with competitors in both Top Fuel and Funny Car.

How does the timeline for a new Toyota Funny Car come together?

“We're always thinking, how can we find more performance? What can we do safety-wise? We start a list from the first day that we roll out a new body for the next body. So we're always working on project like this,” said Andy Graves, Executive Engineer Technical Director at Toyota Racing Development U.S.A.

“So when Toyota Motorsports North America (TMNA) decides we’re ready to refresh a body, whether it's the latest model Camry or, like we have done this weekend where the Toyota GR Supra ends up being the nameplate we’ll use [on the 2022 NHRA Funny Car], Slugger Labbe [TRD's Engineering Manager Vehicle Support], the engineering group, and I already have a list going where we can roll in all those changes into the new vehicle,” continued Graves.

Toyota’s commitment to race vehicles that closely resemble production vehicles continues with this GR Supra. With the new body on the Funny Car for 2022, it marks the most significant styling characteristics of any previous Funny Car.

“After 10 years of fielding the Camry in NHRA Funny Car competition it’s really exciting for us to be moving to the GR Supra and ultimately the next generation of Funny Cars for NHRA,” said Paul Doleshal, group manager of motorsports for Toyota Motor North America. “Our team at TRD (Toyota Racing Development) along with the design team at Calty worked hard to incorporate as many features from the production GR Supra into the Funny Car that J.R. Todd and Alexis DeJoria will drive in 2022.”

In addition to the augmented styling characteristics of the new GR Supra Funny Car, safety enhancements have also been made during the development of the new car. These include giving the driver more visibility while sitting behind the wheel and adding more room around their helmets along with additional safety foam in the driver’s cockpit of the GR Supra. TRD worked closely with Toyota Champion Funny Car driver, J.R. Todd, on many of the safety enhancements during the nearly two-year development process.

“It’s been a really unique experience getting to work with the engineers at TRD on the new GR Supra Funny Car,” said Kalitta Motorsports Funny Car driver J.R. Todd. “To be a part of the work to try to make these cars as safe as possible for us as drivers means a lot to me. We all worked together on some of the issues we’ve faced for some time including visibility. That said, I’ve had some big moments in my DHL Toyota Camry including my first U.S. Nationals win and championship. Toyota’s support of NHRA, Kalitta Motorsports and myself specifically means a ton, and I hope we can deliver even more success to them with this new GR Supra.”

Toyota drivers have won 137 Top Fuel and 43 Funny Car races along with six Top Fuel and three Funny Car championships during its tenure in the series.