Steamfitters UA Local 602, located in the Washington, D.C. Metropolitan area, has renewed its partnership with the husband-and-wife Pro Stock Motorcycle team of Chris and Kelly Clontz for the fourth consecutive season. Clontz will make her season debut at the upcoming Amalie Motor Oil NHRA Gatornationals, the season-opening event in the 2021 NHRA Camping World Drag Racing Series. 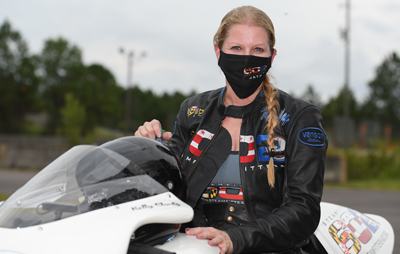 The inception of the partnership began in 2018, which was the first full season for Clontz, who made her NHRA Pro Stock Motorcycle debut in 2017. It was the strategic partnership between KCR and the Steamfitters UA Local 602 that allowed a part-time team to evolve into a full-time team and hopeful world championship contender.

“We wouldn’t be able to run a full season without them,” Clontz said. “This partnership allows us to invest in our on-track performance by upgrading to the [new] Vance & Hines four-valve engine to continue pursuing our ultimate goal of winning a championship. We know that Steamfitters UA Local 602 stands with our team 100%, and we are proud to meet the thousands of pipefitters across the United States, as we pursue a championship.”