Moving stinks. We all agree on that. But anyone who’s ever moved also knows that it’s a great way to find lost or forgotten things. Just look at the 1955 Nationals entry list I found a few weeks ago after The Big Move.

As I finally unpacked the last of my boxes at the new NHRA HQ, I found a stack of about two dozen photos that I’d neglected to refile after I’d pulled them for various reasons over the last few years. It was quite an eclectic and interesting collection, and I thought I’d share with you the kind of flotsam that ends up on my desk. 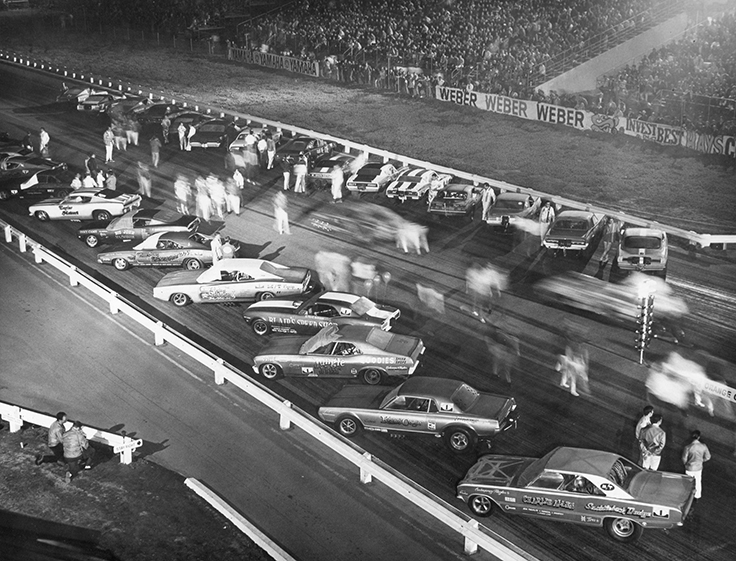 Speaking of Alley, here he is at the wheel of his Age of Aquarius rocket dragster at Irwindale Raceway in April 1977. I remember how stunning it was to see a race car run in the fours at more than 300 mph back when the best Top Fuelers were running in 5.60s at 250 mph. 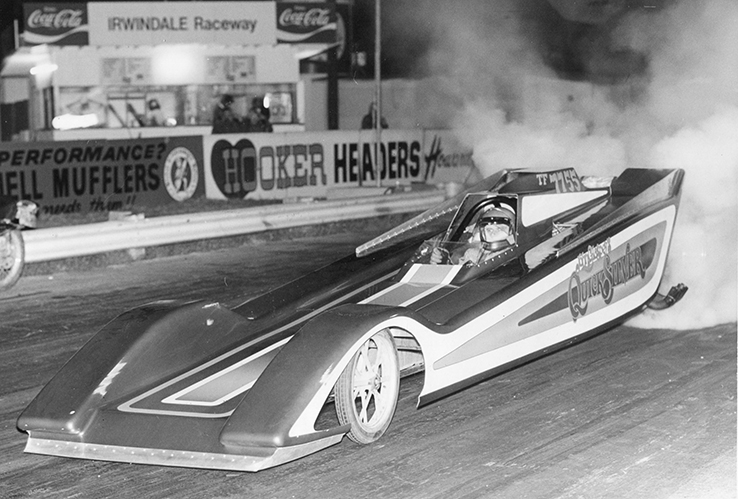 And speaking of Irwindale — always instantly recognizable by the burger stand in the background — here’s a cool shot of veteran wheelman Roger Gates in a sleek rear-engine Top Fueler he was shaking down at the ‘Dale in 1973. 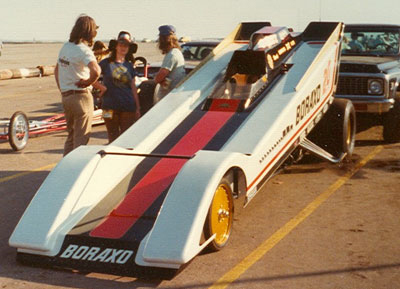 The car, owned by John Glaspey and Jim Moser, never worked out as Top Fueler but later found life as an Alcohol Dragster that was sponsored by Boraxo laundry soap.

As you can see in the photo at right, the car was pretty cool, and the bodywork could be lifted off and was hinged at the front so it could be tilted up, Funny Car style, to access the engine for startup.

Gates and Moser both drove the car to low seven-second passes at just under 200 mph with methanol in the tank. 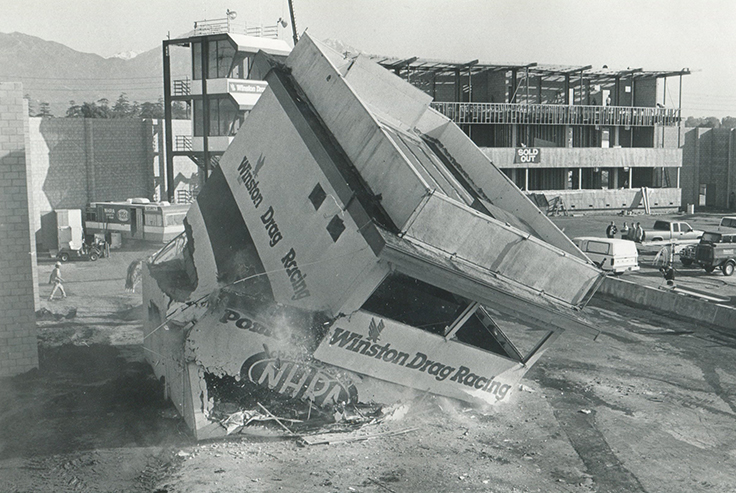 Continuing our spin around SoCal freeways, here’s a shot of the original Pomona Raceway timing tower coming down following the 1993 Winternationals; you can see the current tower going up in the background. The late, great Leslie Lovett was there to photograph the demo of the three-story tower, the bottom-floor exterior wall of which was made famous as the background for so many Winternationals winner’s circles.

Interestingly, the guy driving the front-end loader who knocked down this tower was former Top Fuel racer Bobby Baldwin, father of current rising star Krista Baldwin. Bobby, who died in 2001, ran a construction business at the Fairplex and got the honors, as well as a memorable quip: "I knocked down the victory circle before I could get a trophy there.” 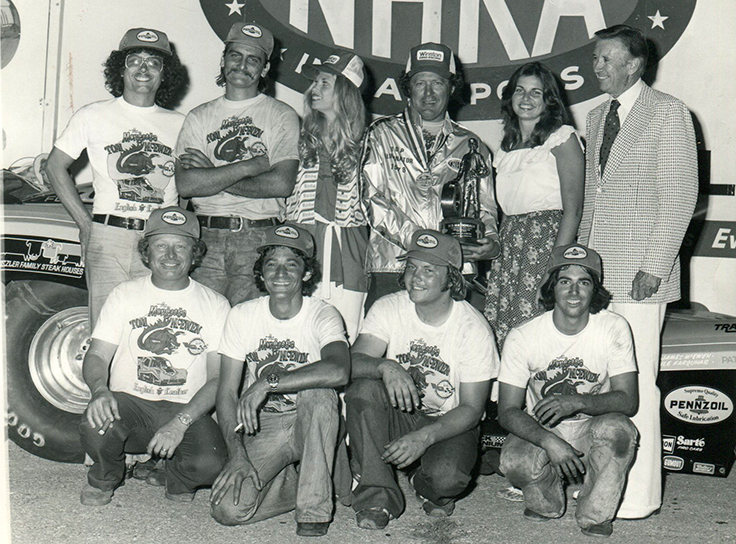 Speaking of memorable winner’s circles, here’s our old pal, Tom McEwen, celebrating (and I use the term loosely considering the circumstances) his emotional victory at the 1978 U.S. Nationals, which came shortly after the loss of his young son, Jamie, to leukemia. Crew chief Pat Galvin is second from left in the top row (getting goo-goo eyes from Miss Winston Cheri Cameron) and NHRA President Wally Parks is far right. 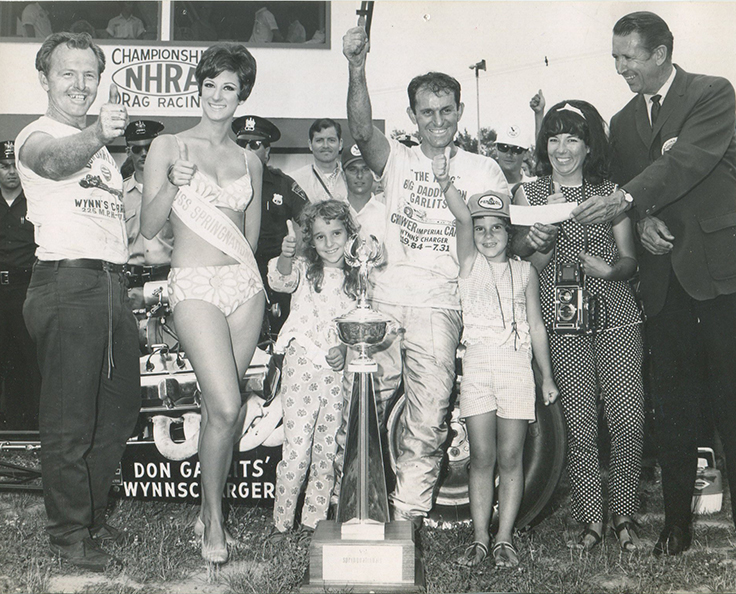 And speaking of Parks (am I the king of segues, or what?), here’s probably one of the rarest photos of all: Parks actually smiling as he hands nemesis Don Garlits a check. Garlits had just won Top Fuel at the 1968 Springnationals in Englishtown. Check out the camera around Pat Garlits’ neck! Not exactly an Instamatic. 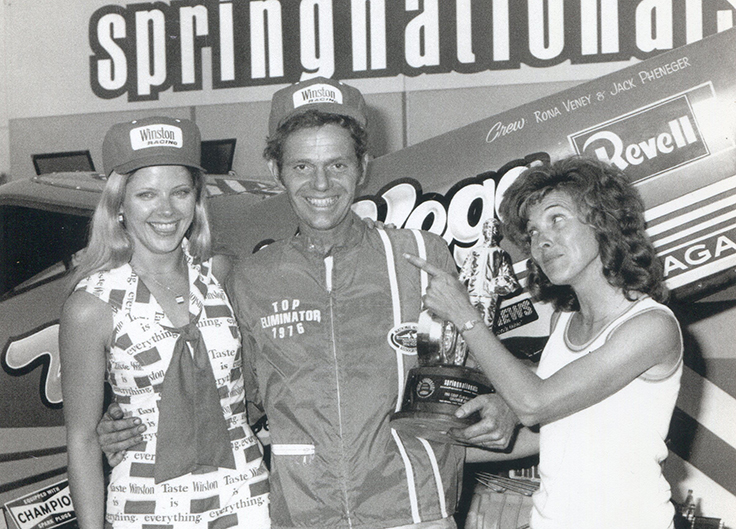 And here’s another fun Springnationals winner’s circle — one of my favorites — of Rona Veney good-naturedly giving hubby Ken the business as he has his arm wrapped around Ms. Cameron in the winner’s circle at National Trail Raceway after winning the Pro Comp title at the 1976 event. 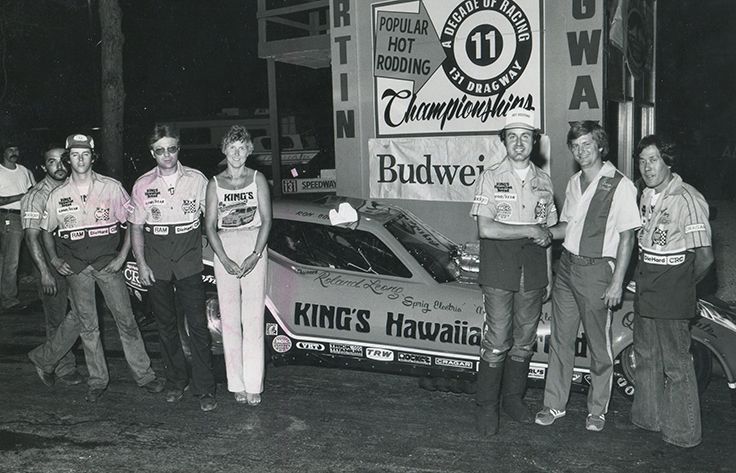 Roland Leong and driver Ron Colson accept congratulations from Popular Hot Rodding magazine’s George Elliott after winning the 1980 PHR Meet at U.S. 131 Dragway in Martin, Mich., in the King’s Hawaiian Bread Corvette. We lost Colson earlier this year, and Leong has been having a tough go medically this year. They’re both never far from my thoughts. 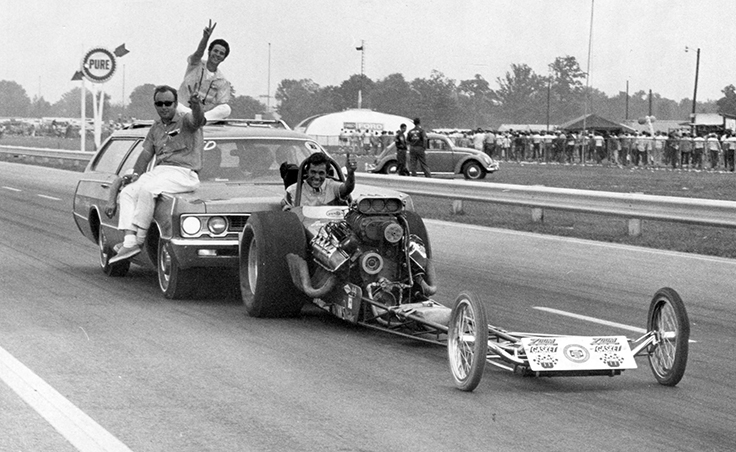 Leong was probably in the push vehicle as his lifetime good pal Don Prudhomme was pushed back up the track after defeating Kelly Brown to win Top Fuel at the 1969 U.S. Nationals. It was “the Snake’s” second Top Fuel win in Indy (after he and Leong won it in 1965), and Prudhomme would win it again in 1970 in the scary final-round victory over Jim Nicoll. 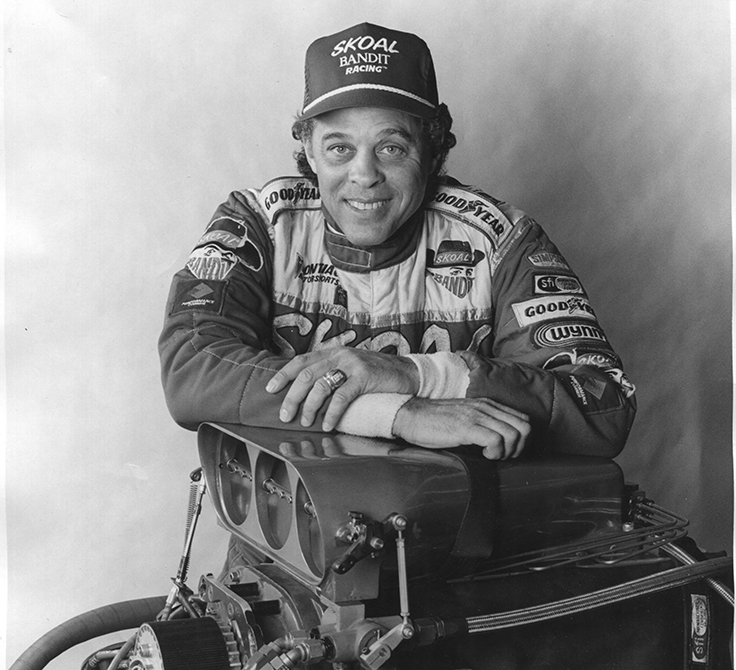 Just a great candid photo of “the Snake,” shot by our NHRA National Dragster staff as he was getting ready to go back to Top Fuel in 1990.

Few people who were there will forget the 2001 U.S. Nationals, where “Big Daddy” finally got his first four-second and 300-mph clockings. I covered the whole effort here a few years ago, and although Garlits’ dream of a ninth Indy Top Fuel crown ended in this first-round pedaling match with Mike Dunn, it was still a huge weekend for Garlits. 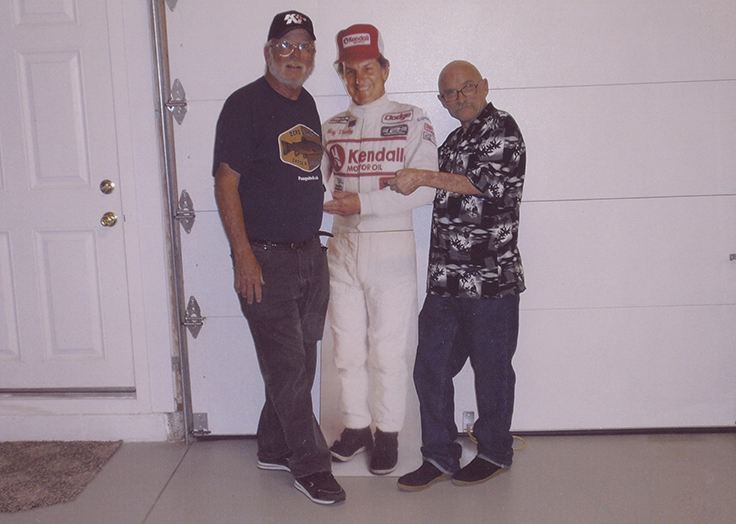 Speaking (again) of Garlits, here he is “standing in” with Hall of Fame starter Larry Sutton, left, and Tim Ditt, the fan whose life was saved by Sutton after he was struck by shrapnel from Garlits’ exploding transmission at the fateful 1970 event at Lions Drag Strip. Read all about it here. 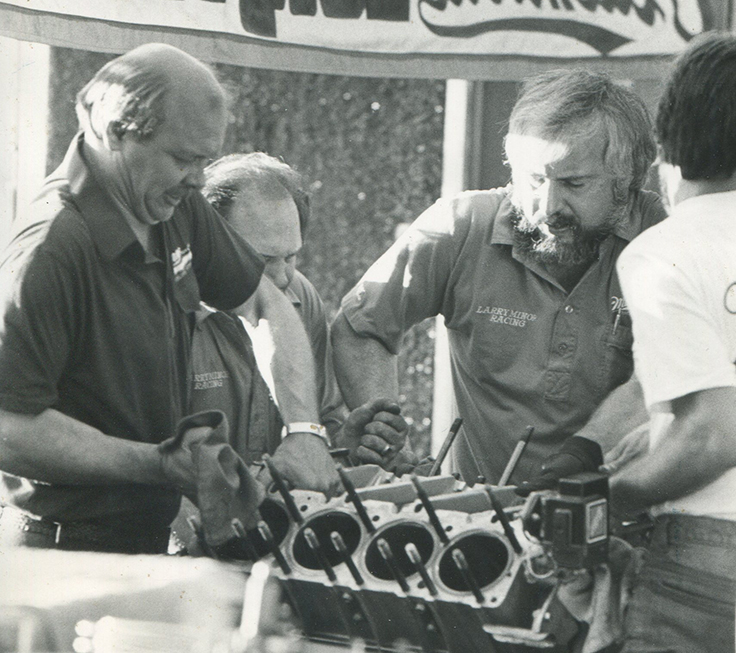 People like to talk about how drivers of the past didn’t spend their hours between runs signing autographs or holed up in the transporter, and no image conveys that more than this one, of three-time Top Fuel champ Gary Beck, left, helping Bernie Fedderly wrestle a new engine block into the Larry Minor/Miller Top Fueler. 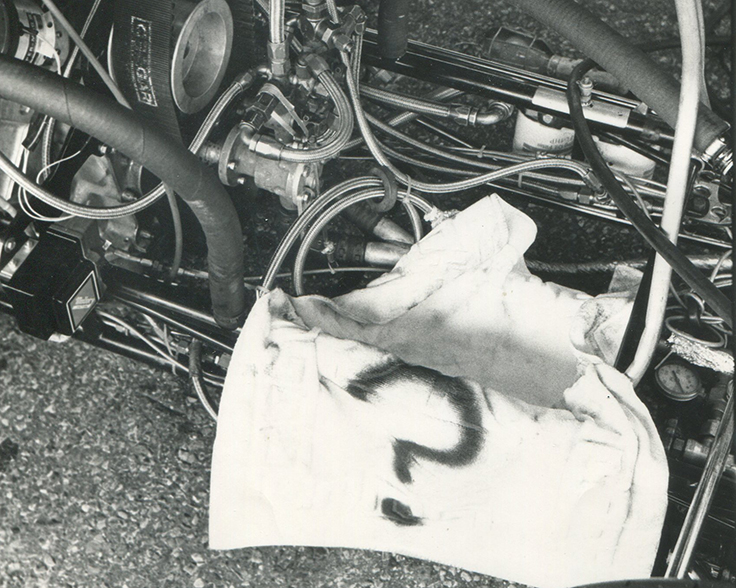 Remember drag racing’s version of “the Terrible Towel?” A takeoff on the Pittsburgh Steelers’ 1975 playoff fan promotion, crew chief Dale Armstrong and his merry group of pranksters on Kenny Bernstein’s Budweiser King team raised eyebrows and suspicions when they started covering a component on their Funny Car when the car was in public and then quickly and deftly removing it just as the body was lowered. Everyone got so intrigued by it that the team spray-painted a question mark on it, further ramping up the furor.

As Armstrong explained to me years later, the device had its origins in trying to create an automatic shifter for Bernstein but repurposed it instead into an automatic high-speed leanout jet that would kick in between 3.6 and 3.8 into the run.

“It was unique, so we covered it up, but it wasn’t that big a deal, really,” he said. “But when everyone made such a big deal about the towel, we made an even bigger production out of it to mess with everyone’s head." 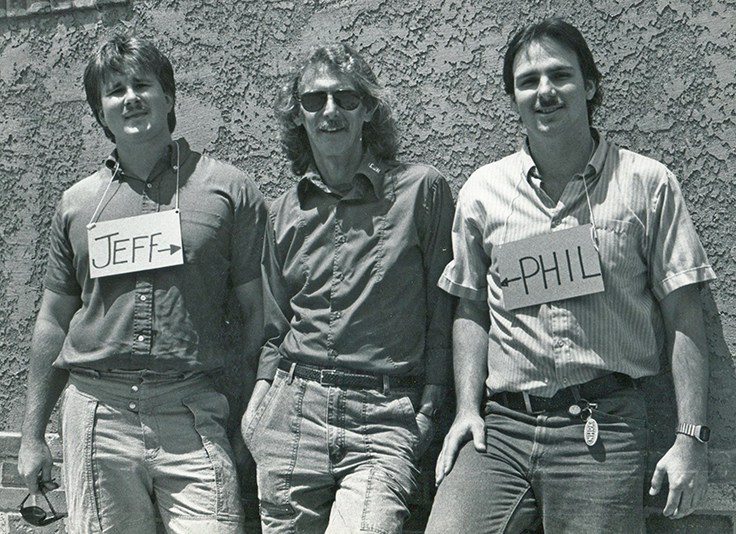 And, in the Final Segue of the Day, talking about getting into people’s heads was what this photo was all about. Yep, that’s a very young me on the right and my longtime Dragster cohort Jeff Morton on the left, trying to help correct some (now) long-forgotten mixup between us that appeared in print somewhere. Between us was my mentor, John Raffa, who joined the Dragster staff in the mid/late 1980s as Editor in Chief to teach us some rapscallions how to really write. We all thought we were good writers then, but “Mean John” — who was anything but mean, but we'd good-naturedly whine to one another how "Mean John" had torn apart our copy — whose credentials included game-changing stays at Super Stock & Drag Illustrated and Car Craft — taught us how to be better. We lost him in January 2004, but his teachings live on in those like me who touched me with his grace, and you should thank him for some of what I do here.

Next year will be my 40th covering this great sport and its wonderful people, and there’s still magic in it all. Thanks for coming along for the ride, but I guess I’d better go and file these photos.