On the eve of NHRA's historic 1,000th national event, a blast from the past: The official entry list for the 1955 National Championship Drags, NHRA's first national event, is like a time capsule for our sport, filled with legendary names from drag racing's early greats.
28 Oct 2021
Phil Burgess, NHRA National Dragster Editor
DRAGSTER Insider

I knew I had it somewhere, but where? Somewhere along the way, someone had given me a copy of the hand-typed official entry list for NHRA’s first national event, the 1955 National Championship Drags in Great bend, Kan., The Big One that got this whole thing started and leads up to this weekend's momentous milestone of 1,000 national events.

We’ve been building up to this moment since Bob Frey and I collaborated late last year to get an accurate count of national events. One of the things that we really hoped to do was to find a competitor who had raced in Great Bend and bring him to Las Vegas, but I couldn’t find the darned entry list.

We’ve already covered this week some great stats from Frey and a recap and photo gallery from the first event, and I had all but given up hope until I started unboxing my stuff from the Big Move and there it was: The 1955 Nationals entry list.

The entry list contains the names of more than 200 hopefuls from across the United States, all seeking the glory of becoming the sport’s first true national champion. 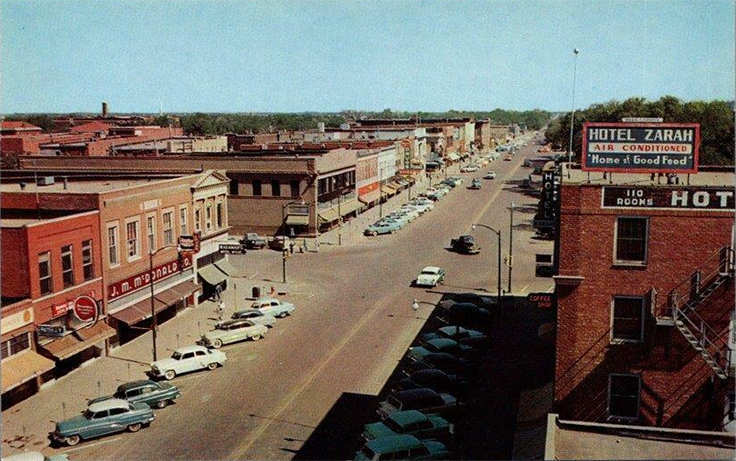 In the top right corner of the lead page, barley visible, are the words National Hot Rod Association PRESS HEADQUARTERS, Room 206, Zarah Hotel. So, naturally, I Googled it and came up with this great mid-1950s photo of Great Bend’s Main Street and there, on the right, is the Hotel Zarah ("Home of Good Food!"). Wow. How cool!

They flocked to what was the approximate geographic center of the United States coming from 24 different states, from as far away as Massachusetts, Pennsylvania, New York, and New Jersey to the east and California, Washington, and Hawaii (which would not become a state for another four years) to the west, and from 18 cities within Kansas, including a handful from Great Bend itself.

Rather than blabber on here, I scanned the four-page document (typos and all) for your treasure-hinting enjoyment. If anything cool leaps out from there or if you know someone on this list who’s still alive, drop me a line. Thanks! 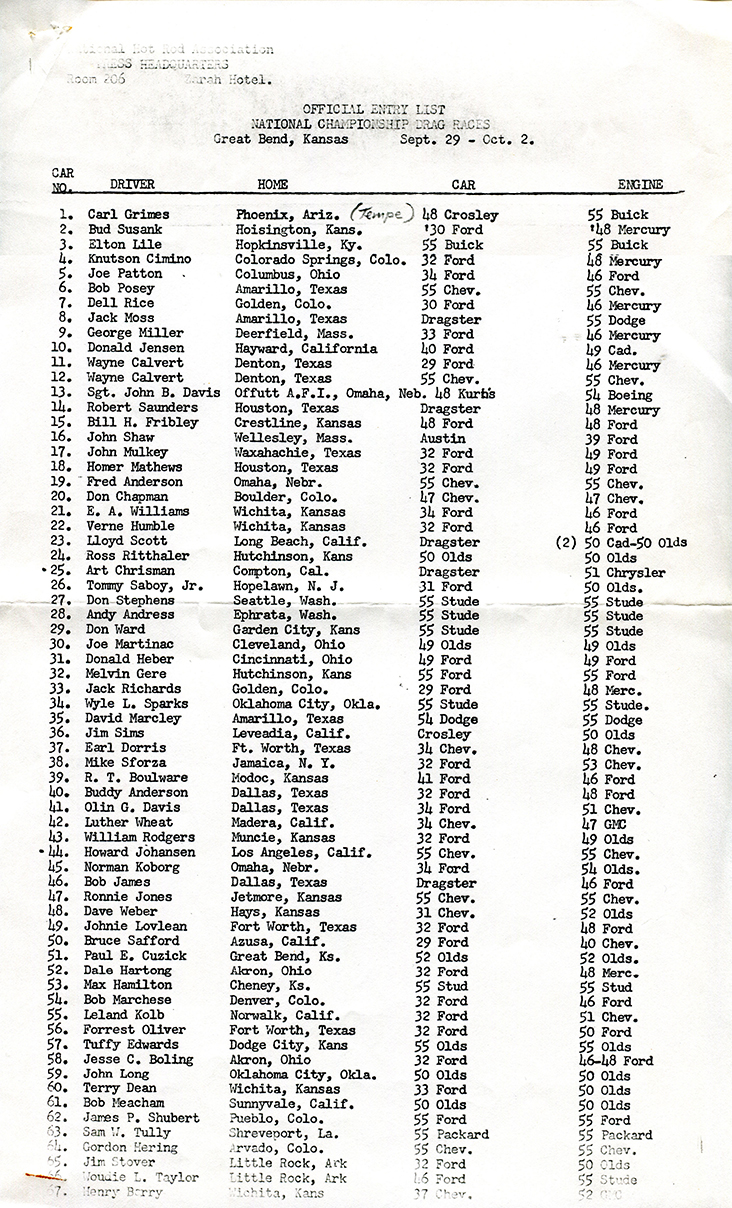 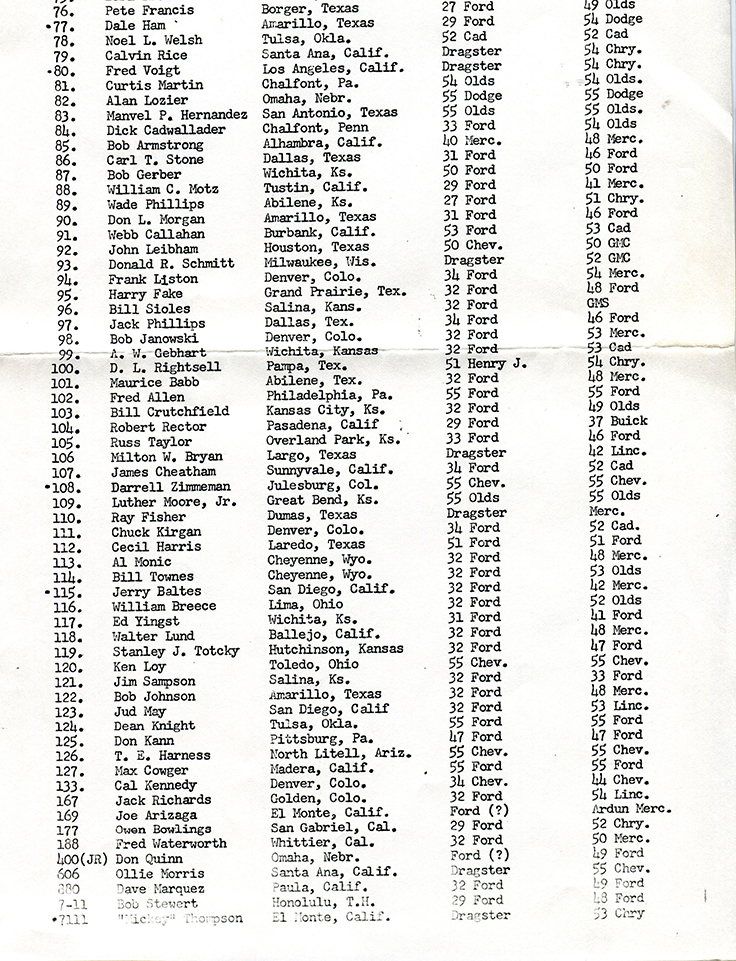 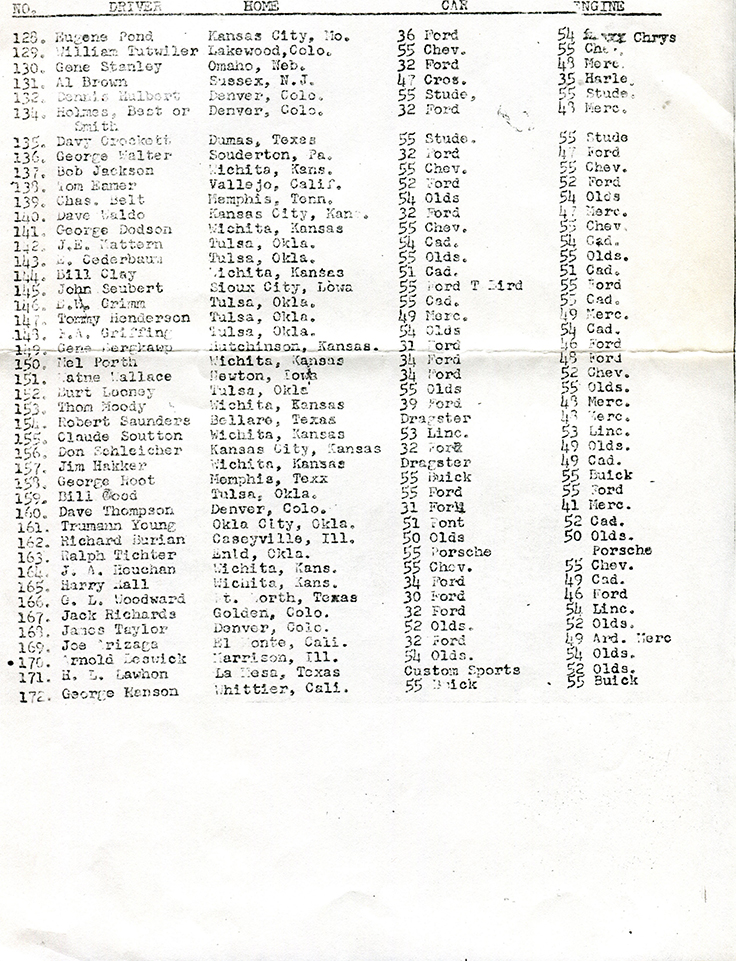 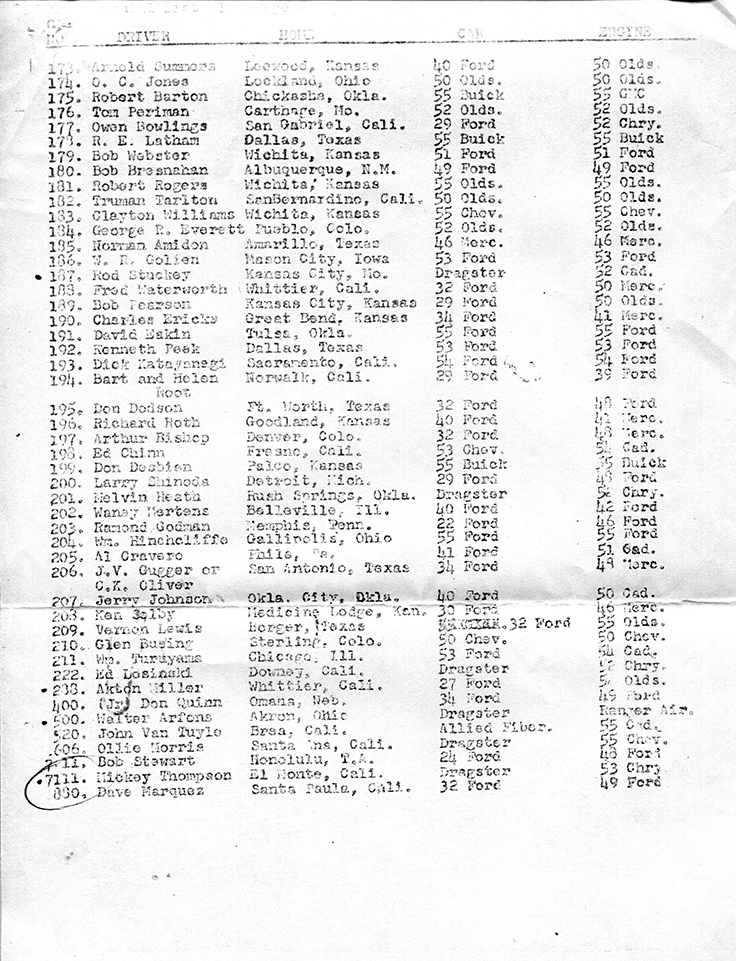 How cool is that? It's like a living, breathing touchstone to our past. I hope you enjoyed it as much as I did.