In every championship season, there is a defining moment, that instance in time to which a driver or a team can point as a game-changing juncture in its fate.

Sean Bellemeur has zero problems remembering his in a season that earned the Killers Bs -- driver Bellemeur, team owner Tony Bartone, and tuner Steve Boggs –- not only their third NHRA Top Alcohol Funny Car championship in four years but also the inaugural Summit Midwest Drags championship that they were concurrently chasing.

A giant late-season engine explosion at Tulsa Raceway Park had heavily damaged their car, putting both championships at risk, and they were pondering their next steps.

“It’s two o’clock in the morning in Tulsa [Okla.], and we’re sitting there with a pile of what’s left of a race car. The body was junk, the engine was junk, and we lost our last good blower. It broke the crankshaft at 10,000 rpm and tried to shove the crank right out of the front of the engine. The more we took it apart, the worse it got. Basically, the only thing it didn’t hurt was the chassis and a rear end. It was fuel car-level blowup; the biggest one I’ve ever had.

“And I’ll remember it the rest of my life because, here we are, two hours after completely destroying a race car while we’re in the middle of two championship fights, and my ears are still ringing from the explosion, and one of my crew guys just said, ‘Listen, it’s very simple. If we win everything, then we win the championship.’ That was the moment that I really felt like, you know, we can do this, and we just put our heads down and went to work.

“We didn’t have a good blower left – we’d hurt our best blower [in] Indy, and our other was out of [certification] – but Aryan Rochon came to the rescue and offered the blower off his car and even offered us his entire race car – it was our previous car – but we decided to regroup and fix our car the right way. We decided to skip the Dallas [NHRA national event] and regroup because we knew the whole rest of the season was going to be an uphill battle.” 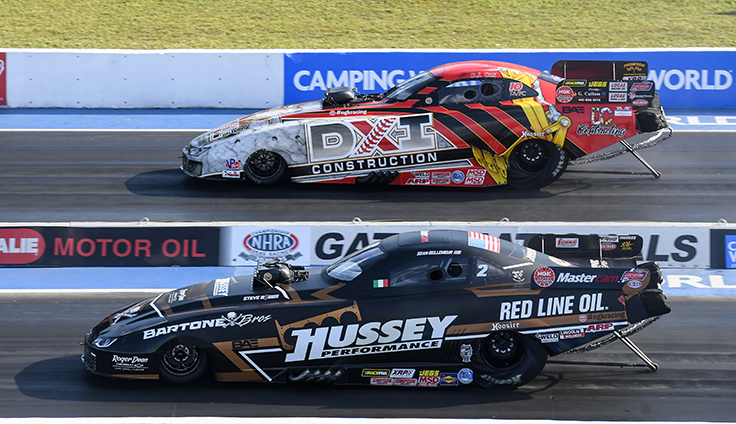 The team’s absence from the Texas NHRA FallNationals helped clear a path to victory and the points lead for defending world champ Doug Gordon in his season-long back and forth battle with Bellemeur. Bellemeur had already won four national events and had a perfect three-event regional win scorecard, and Gordon’s Beta Motorcycles team had also collected four national event wins and a pair of regional victories.

The Dallas win gave Gordon the points lead, and he could still improve his points total at the Las Vegas national event. Bellemeur could earn points in both Vegas and the season finale in Pomona.

Before heading to Las Vegas, the Killer Bs –- using Rochon’s blower –- won the Summit Midwest Drags championship in Texas then headed west to try to double up.

“Everything was new but the chassis,” he said. “We had changed the front end, the body, the motor. We had a real good test session. My driving was good. Steve’s tuning was good. My guys were working well together, just like it was clicking.” 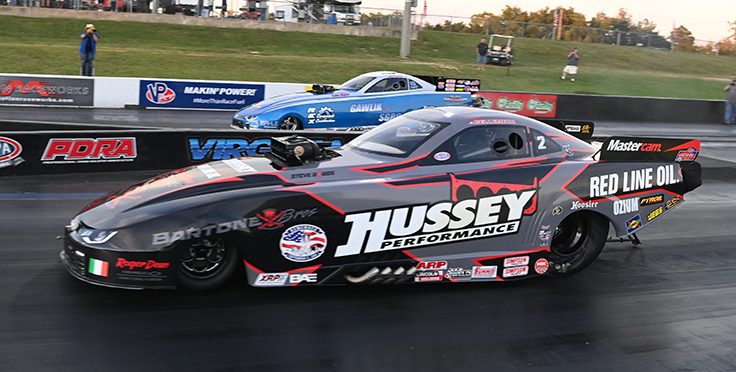 The drama of the big showdown in Las Vegas took an unexpected turn when Gordon stunningly lost on a holeshot in the opening round, sealing his total at 776 and clearing the path for Bellemeur. An event victory could give him the championship; anything less meant that he’d need to go to the Auto Club NHRA Finals to complete the job.

“The last thing in the world expected was Doug Gordon to go out first round,” said Bellemeur. “We weren’t relying on that to happen to win the championship, but our attitude didn’t change. In a perfect world, we would have gone head-to-head with Doug for the championship, but when Doug went out first round, that happened the pair right in front of us, and I got on a radio and said, ‘Guys, let’s keep our heads down; let’s just keep doing what we’ve been doing,’ because I thought we had to go to Pomona to better on our 10th race; shows you how much I know.”

What he didn’t know was that a final-round victory over Brian Hough would indeed return the championship to the team.

“I never want to know the scenarios,” he admitted. “I just know that if I win races, the points will take care of themselves. When I staged for the final against Hough, I honestly didn’t know that would win us the championship. When I crossed the finish line in the final round, my guy came on the radio and said, ‘That’s it, buddy, we’re world champions.’

“I was still having a hard time absorbing that, and I about fell down at the top end because I turned around and they were holding the sign up and I went, ‘Wait a minute … really?’ That was absolutely a shocking moment for me and one of the first things that I thought about was that night in Tulsa, standing around a burned-up, broken race car with my guys just coming together and saying, ‘Let’s do this.’ Damn it, we really did it.”

Even though the championship was locked up by his 5.53 to 5.97 victory over Hough, the Killer Bs not only played out the rest of the season but did so in championship fashion, winning both the West Region event and the NHRA Finals, stopping Gordon in both final rounds. The Pomona win was the 26th of his career, all coming in the last six years, all with the Bartone team.

“We lost a heartbreaker last year, losing our championship to Gordon,” he admitted, “but one of the things that I love about my team is all that did is drive them to be better. And, take nothing away from the Gordons and what they accomplished last year – they kicked our butts plenty all over the country – but all winter long, the name of the game was getting back on top. And, when we came out, we won the Baby Gators [East Region event] and the Gatornationals, and on paper, you saw two wins, but behind the scenes, what people didn’t see was us blowing the dash and the windshield out of the car on our second run in testing, so my guys had their feet to the fire right from the beginning.

“The secret behind our success is Tony Bartone’s drive to win and giving us the finances to win. No matter what we were up against, he was willing to put forth everything it took, and Steve Boggs, I saw a change in him this year, to where it wasn’t just status quo – go out and win drag races – it was trying things to get a step ahead.”

“I really believe that the best feed off one another. I feel like we help the Gordon family be a better race team, and I know for 100% fact that they have made us a better race team because if we didn’t rise to the occasion, they would have been world champion again. All the way from qualifying in Gainesville to that last final round in Pomona, we were both out to prove that we were the better car.”