Achieving any measure of sustained success in Pro Stock has never been easy, and it appears to only get more difficult with each passing year. No one knows that better than Greg Anderson, who won his fifth NHRA Camping World Drag Racing Series championship in 2021 but had to fight to the bitter end in order to make it happen.

Anderson won five races and appeared in nine final rounds during the season. He spent the entire season in first place, a misleading statistic which makes his latest title look deceptively easy. In fact, Anderson’s “drive for five” was a far cry from one of his early championships in 2004, when he won 15 of 23 races and compiled an all-time-best round-win record of 76-8 on the season.

“Those days are long gone I’m afraid, and I would bet they’re not coming back anytime soon, if ever,” said Anderson. “We work every single day to try and get back to that level, but the way the rules package is, and the way that information is shared, it’s hard to make even small gains.

“Today, this class is so difficult, it’s hard to explain. Everyone, and I do mean everyone, can drive. There are no easy rounds. This year, I probably had the best year you could ever hope for in terms of performance, and even then, I could lose easily. Personally, I can’t tell the difference between a .020 and a .040 light. I’m sure some guys can, but I can’t. That’s not my strong point.”

“You’ve got kids that come in here now and right from the start they’re in equipment that is as good as anything in the class, so they can win right away,” Anderson said. “We didn’t’ have that when I came in. Back then, you’d spend a year or two in an uncompetitive car and take your lumps while you learned to drive and figured out how to win. That’s not the case anymore.”

Anderson finished No. 4 in last year’s COVID-19-shortened season and didn’t win a race for one of the few times in his career. Then, the KB Racing team underwent sweeping changes during the offseason after Jason Line, Anderson’s teammate and wingman for more than two decades, decided to hang up his helmet. Line’s departure opened the doors for the KB team to field a car for longtime crewmember Dallas Glenn, who perfectly illustrated Anderson’s point about young talent with three wins en route to the NHRA Rookie of the Year. 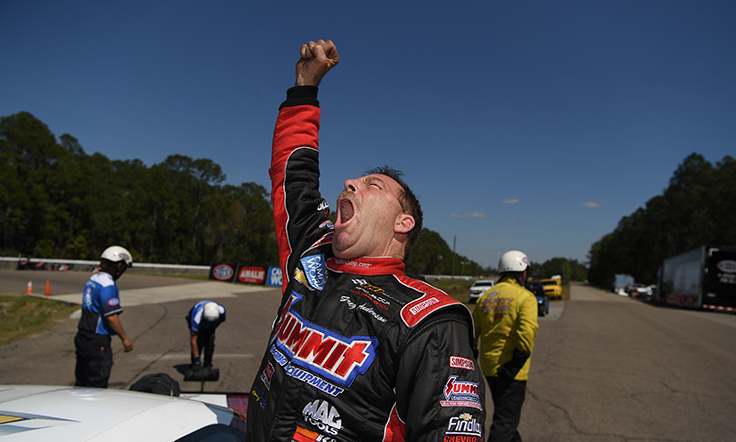 Anderson kicked off the season by winning the Amalie Motor Oil NHRA Gatornationals in Gainesville and quickly added a second title at the four-wide event at the team’s home track, zMax Dragway, in Charlotte. At about the same time, Anderson added another crucial piece to the puzzle when he signed HendrickCars.com as a sponsor for the season.

Primarily known for his success in NASCAR, Rick Hendrick is a longtime drag racing fan, who not only provided the funding for Anderson to chase a fifth title but also proved to be a powerful motivator.

“That was a huge relief,” Anderson said. “I was getting close to the point where I might not be able to race anymore. I was close to being on the sidelines. It takes a lot to run these cars, a lot of money, and we almost had to make the decision to park my car and focus on our customer programs. I didn’t want to do that, and thanks to Mr. Hendrick, we didn’t have to. In HendrickCars.com, I also got a sponsor that genuinely cares about what we’re doing. It was great to have that support.”

Funding for the season secured, Anderson went to final rounds in Epping, Norwalk, and Pomona, and even though he lost all of them, he accumulated enough points to maintain a comfortable lead in the Camping World standings.

While Anderson’s main focus this season was winning his fifth championship, there was also another piece of long overdue business to tend to. In Reading, Anderson earned career win No. 97 to tie his longtime mentor Warren Johnson for the most wins in Pro Stock. Anderson took sole possession of the mark a few weeks later in Dallas, where he defeated Chris McGaha for win No. 98. He finished the season with 99 following a Pomona win, meaning there is likely more history on the horizon.

“I think that was huge; I certainly thought about it during the season,” Anderson said. “Thankfully, it’s okay to think about it. My whole purpose for being out here is to win races, so I knew if I won races, we’d eventually get the record. I’m just glad it’s done. Someday, you’re going to stall out and not be able to win anymore. You don’t know when that will be. I’m just glad we got 99 in the bank and look forward to being able to get 100, hopefully early next year.”

Championships are won and lost during the Countdown to the Championship, and that’s where Anderson did his best work of the season with three wins and a runner-up in six races and a 16-3 record in elimination rounds. Anderson was also the undisputed king of qualifying points, securing the top spot 12 times in 17 races.

On its best days, the rivalry between Anderson’s KB Racing team and the Elite team that fields cars for four-time champ Erica Enders, among others, is barely civil. Other times, including late in the season when there is a championship at stake, the battle becomes a free-for-all with the ability to test the boundaries of good sportsmanship.

This year’s championship tiff was no different as rivals Anderson and Enders headed down the stretch locked in a fierce battle for the top spot. By the time the tour reached the Dodge//SRT NHRA Nationals in Las Vegas, the gloves were off. At that race, Elite teammates Aaron Stanfield, Troy Coughlin Jr., and Cristian Cuadra qualified at the bottom of the field, with the hopes of drawing Anderson in round one. The strategy worked to perfection as Coughlin not only drew Anderson but also handed him his first opening-round loss of the season.

“I do absolutely enjoy the rivalry with [the Elite team],” Anderson said. “Then again, they are a handful. If nothing else, they keep you entertained. They’ve got some great drivers and great equipment. They can win races and championships, and they certainly push us to get better.” 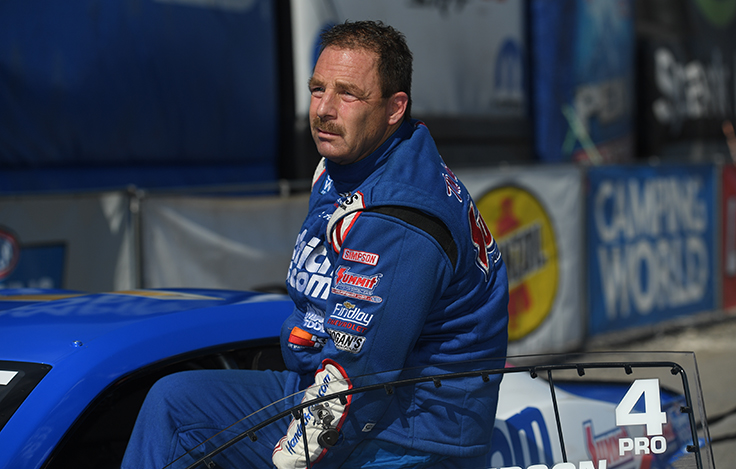 The loss in Las Vegas made the championship a lot closer than it should have been, but Anderson turned in perhaps his best performance of the season at the Auto Club NHRA Finals when he ran the table in qualifying and then dominated race day to clinch the title and earn career win No. 99. The title was decided in the semifinals, where Anderson took matters into his own hands and defeated Enders.

“There was pressure,” Anderson admitted. “I felt like after the year we had, we’d let everyone down if we didn’t finish it. In Pomona, I had the best race car we had all year. I guess we saved the best for last. What a relief to finally get it done.”

At age 60, Anderson is not a kid, but he also feels like he’s still competitive, and his record reflects that. To that end, he’s not ready to give up in his quest for a sixth title and 100th victory.

“Don’t throw dirt on me yet. I’m not done,” he said. “The kids, even the ones in our own camp, are a constant reminder how lucky I am to have won this year. Can I hold them off another year? I hope so, but they are relentless. They have zero problems with lights and zero fear. They don’t care who’s in the other lane. That’s just how it is right now. We’ve got to get accustomed to it.”