It’s no secret that driving a Funny Car can be daunting even under the best of conditions. A short-wheelbased, 11,000-hp nitro roller skate known to shake or smoke the tires, veer wildly around in its lane, or erupt in a volcanic engine explosion — and sometimes all four on the same run — a Funny Car can be a handful for even the most experienced wheelman. Now imagine having to step into an unfamiliar car, with new crew chiefs, new driving procedures, and reversed controls and you get some idea of the challenges that Ron Capps faced and overcame en route to winning his second career NHRA Funny Car championship.

Capps began his 25th consecutive year of driving a Funny Car with a gutpunch when his longtime crew chief and friend Rahn Tobler unexpectedly resigned from Don Schumacher Racing just weeks before the start of preseason testing. Schumacher quickly pivoted, assigning Dean Antonelli and John Medlen — who were expecting to be idled or worse after their Jack Beckman-driven car lost its funding — to tune Capps’ NAPA Auto Parts Dodge. It proved to be a perfect combination.

“I was heartbroken to lose Tobler, but I’ve known ‘Guido’ [Antonelli] for a long time, so the chance to work with him and Medlen was exciting,” said Capps. “I’ve always respected John and have a picture of Eric [Medlen’s late son] on the back of my injector that I always use as an aiming point for the car.

“My first conversation with ‘Guido’ he told me that they do things differently on the car, not just for driving but also leading up to a run, but that he already was looking over our car and was gonna start switching things over on their car, and I said, ‘No, stop. You guys have had a great car, leave it alone, and let me adapt to you.’ The biggest thing for me was that they use a push [hand] brake and all I’ve ever driven for 27 years is a pull brake.

“In testing, I almost ran over a crew guy because I went to pull the brake to stop, and it also changed the way I stage the car. It took me a couple of races before I started getting used to it, and believe it or not, my reaction times were as good or even sometimes better. We went to West Palm [Fla., for testing] and hit the ground running right then and then went to [the season-opening Amalie Motor Oil NHRA Gatornationals] and grabbed the pole.

“We were using a six-disc clutch — Tobler always ran a five-disc — and it’s completely different how the car locks up, the way it feels, the way it drives, even the way it sounds, but I noticed instantly how much power they were making. I knew right away we had a great car if I could just drive it the way it needs to be driven. We had a small issue with cylinders dropping downtrack and lost several rounds that way early, but I knew then when — not if, but when — ‘Guido’ found out how to fix that it was really going to be good, so it was just a matter of time.” 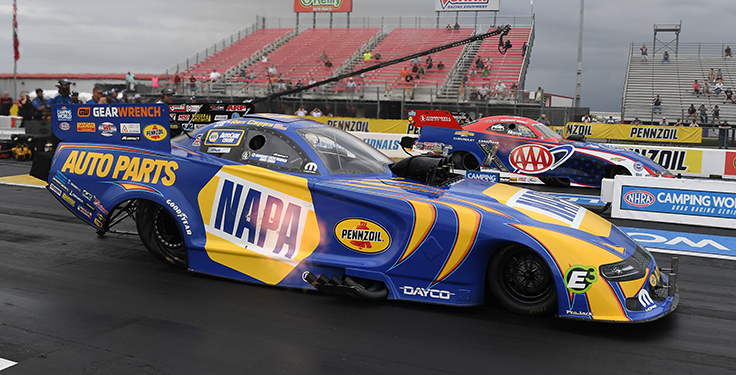 After losing in round two in Gainesville, the team reached the final round of the Las Vegas four-wide event but finished fourth despite a 3.97 pass. Three races later, they were back in the final round in Houston but smoked the tires against Robert Hight.

A fiery first-round loss to underdog Terry Haddock in round one in Epping scorched Capps’ fireboots and their feelings, but they recovered with a trio of semifinal finishes in Norwalk, Denver, and Sonoma, putting behind them the dropped cylinders gremlin just in time for the delayed Lucas Oil NHRA Winternationals presented by ProtectTheHarvest.com in Capps’ Pomona backyard.

Under scorching air and track conditions, Capps’ NAPA Auto Parts Dodge was deadly consistent, finishing with three straight 4.15s to get the new team their first win and points lead of the season.

“Pomona was the first really hot conditions, and it showed me how good ‘Guido’ could be in any conditions, so it was a building weekend,” said Capps. “It really showed me that we’re gonna have a car to run for the championship.”

After a pair of second-round losses in Topeka and Brainerd, Capps was back in the final at the Dodge//SRT NHRA U.S. Nationals, the one big prize that has eluded him throughout his career … and did so again when Tim Wilkerson beat him, 3.91 to 3.94. 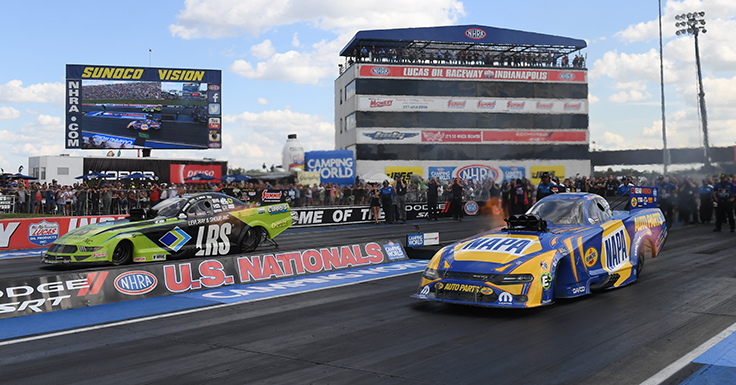 “Our car was running so good on Sunday that I thought, ‘This is it. This is the year I’m finally gonna get it,’ and then there was Wilkerson’s car out the window, and I thought, ‘Oh my god, again?’ We got Wilked.”

The runner-up nonetheless gave the team back the points lead and the top seed in the Countdown to the Championship. At the same time, their closest rival and DSR teammate Matt Hagan contracted COVID-19 and was forced from the seat and replaced on an interim basis by Tommy Johnson Jr. — who then beat Capps in round two of the Countdown opener in Reading.

“It was tough, because I loved the fact that Tommy had a chance to win a race and drive a car like that,” he said, “but it was also tough because here we are in a battle, and we know that’s a great car, and they put in a driver that’s just as good, and in circumstances that we never would have thought of five years ago that we would need to sport.”

After a semifinal loss in Charlotte, Capps lost on a distracted second-round holeshot to deep-staging John Force and was just sick about it. 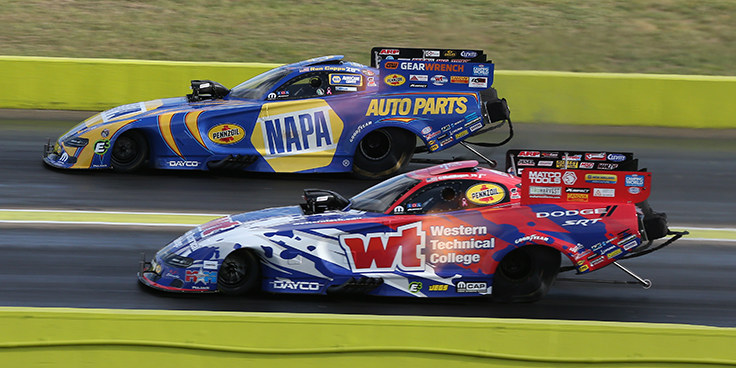 “I made a mistake that I’m not sure I had made in my 20-something years of driving, and I was devastated,” he admitted. “I just wanted to get to Dallas and try to make it up to my guys, and we ended up beating Hagan on a holeshot in the final, which put us right back in the thick of things. That was a big points swing; had that gone the other way, who knows? Because mentalities change, and approaches change, not just the points. You get behind, get a little more aggressive, and sometimes you smoke the tires.”

After a semifinal loss in Bristol, where he crossed the centerline, Capps and Co. zeroed in on the title in Las Vegas, where Hagan, Force, and J.R. Todd all lost in the first round, and Capps defeated Wilkerson and went to the final before falling to Cruz Pedregon.

“We had the president of NAPA and several other people from corporate headquarters there, and when you have Wilkerson in the opening round, that doesn’t make for a good night’s sleep, especially after him just whipping us left and right all year,” said Capps. “We won a close one over Wilk, and looking back, that might be the run that won us the championship.”

It didn’t, of course. That didn’t happen until the Auto Club NHRA Finals two weeks later when, after beating Capps in a crucial second-round race, Hagan was defeated in the semifinals by Alexis DeJoria. Capps watched from behind the starting line, almost out of sight. 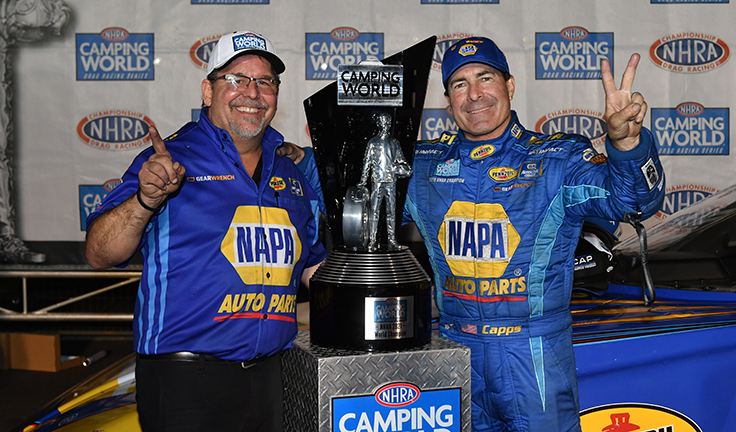 “I felt like a field goal kicker; nobody was coming over and standing near me,” he said. “I didn’t know it was good or bad. It’s hard to see that time of the day, the glare is pretty bad, and the clutch dust on the cars — it was just tough to see, and all I know is I just saw the big lights flash on top of Alexis’ lane: ‘No way,’ and then it’s, ‘Oh my god. We’ve actually done it again.’ And then I instantly wanted to be back in my pit area with my crew guys, because I knew they must have been going bonkers.”

“There were just so many people who helped us this year. I want to thank everyone at DSR for all the years together. GearWrench Tools came on board this year with a lot of support, especially for the crewmembers, so to win a championship the first year with them is pretty special,” he added. “I’d like to also thank all the family and friends who surround us throughout the year — including mine, of course — but especially the team members’ families, and all the NAPA families throughout the country. NAPA stores aren’t franchised or company-owned like others. It’s people and families who own and run all the NAPA stores/NAPA AutoCare shops, and I’ve developed a family-type bond with them. This championship was for all of them.”