Steve Torrence and “them Capco boys” won 11 of the 20 events –- including his milestone 50th in the class –- and led the points after 18 of the 20 races en route to their fourth straight Top Fuel world championship.
31 Dec 2021
Phil Burgess, NHRA National Dragster Editor
2021 world champion profile

In 2018, Steve Torrence won his first Top Fuel championship. He repeated in 2019 and, in the process, became the first driver to win all six races in the Countdown to the Championship. He won his third straight title last year, in a pandemic-shortened season that included no late-season points reset.

So, what do he, crew chief Richard Hogan, and “them Capco boys” do for an encore? They have their most prolific season ever, winning 11 of the 20 events –- including his milestone 50th in the class –- and led the points after 18 of the 20 races, including, of course, the season finale, which they also won.

Sometimes the level of success even surprises him, not that he ever takes more than a second to think back on it, because he’s already looking for the next win or championship.

“Man, if you would have told me in 2011, when we started this, that we would be four-time world champions with 51 race wins, I would have said you’re out of your mind,” he said humbly. “But one thing that this team does is to approach every race with the same intensity, and we don’t ever look back at what we’ve accomplished. When you get hung up on, ‘We’ve done this and done that,’ I think that that’s a recipe for disaster, and you see all kinds of teams do that in different sports.

“You’re only as good as your last race, and we can’t live off what we’ve done because everybody else is definitely gunning for us. We feel the pressure. We see other teams stepping up more and more, so we have to continue to do the same. Once we had a big enough points lead, we started testing during qualifying because we needed to. You would think it would become easier, the more dominant you’ve been, but it’s by far harder to stay at the top because not only do you get their best shot, but you also get their best shot every time.”

Brittany Force and her David Grubnic-led Monster Energy team were certainly the ones giving the Capco Contractors team their best shot all season, trading blows and even the late-season points lead.

Torrence beat her in the final rounds in Charlotte, Norwalk, and Indy, but she beat him in the semifinals in Topeka en route to her only win of the season, and again at the fall event in Charlotte, in a controversial race where the scoreboard win light first proclaimed him the winner before a video review proved otherwise. Although she lost the final round there to Josh Hart on a holeshot, the damage was done, and she briefly took the points lead.

Torrence took the lead back with a runner-up in Dallas and another runner-up in Bristol, then he all but cemented the title with a win at the fall Las Vegas event, where the two almost met in what would have been a titanic final round.

“Brittany and that car were bad to the bone,” he said. “I felt bad for her because she was having some problems at the Tree. She’s very motivated and very competitive, and she was bringing it at the end of the year but got beat in the semi’s by Mike Salinas even though she had a really great light. I was down there, and she was just sick about it. I said, ‘You’ve got nothing to hang your head about. You just went up there and were [.058] on the Tree and got beat by a guy that just stepped on the gas and went .027.’ I mean, I’m not rooting for her to win, but I felt bad for her because that’s a hard one to swallow because she did her job.”

Torrence went on to beat Salinas in the Vegas final, sending him to the season finale in Pomona with a huge lead that could be lost only with a first-round loss and an event win by Force. Torrence ended the drama early by beating Brandon Welch to seal the title.

“The implications from the [reversed] Charlotte race could have been huge,” he reflected. “If [we got that win and] the rest of the season goes the same, we would have clinched the championship before we [got] to Pomona, so I still had quite a bit of nerves going on in Pomona just because these are Top Fuel cars and you’re going into the first round against Welch, who’s got [tuner] Scott Graham over there with a car that’s very capable of putting us on the trailer if we mess up or I don’t do my job. Even though I’ve gotten a lot better at controlling my nerves and my emotions, you’ve still got that in the back of your mind: Don’t screw this up. Just go do your job.

“I’m able to do that because of the confidence my crew gives me. Bobby [Lagana Jr.] has assembled an incredible team, and we have a culture where our love for winning is so far exceeded by our hatred for losing. That’s what completely motivates us, and they just do everything to not let that happen. You can look back and not see any rounds that we lost because the car did something other than smoke the tires.” 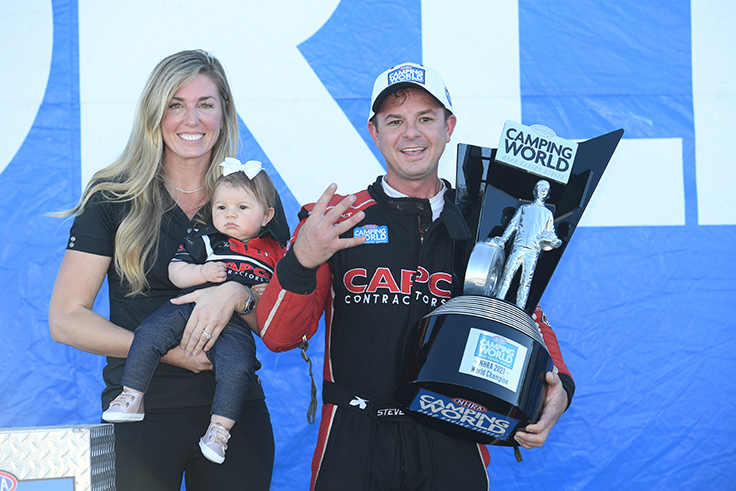 The Capco team especially had to put its heads down for the seven-race Countdown run after the points were reset following Indy. Their massive 411-point lead was cut back to just 20.

“Because we usually do so well in the regular season, we’re not big fans of the Countdown – someone online did the math that without the reset we would have clinched the championship after Dallas – but these are the rules we all have to play by, and whether you want to or whether you don’t, your mindset changes. It’s that fight or flight, and you’ve got to get back aggressive, you got to get back serious, and get out there and get after it because every round is impactful.”

The team certainly made an impact, reaching the semifinals or better at all seven Countdown events, including five final rounds and three wins. That’s a pretty good body of work. 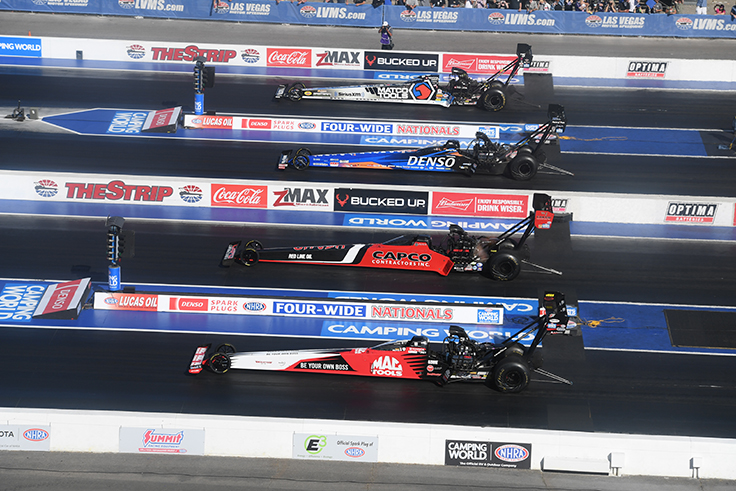 Torrence’s other great “body of work” arrived early in the season when he and wife Natalie welcomed their first child, daughter Haven Charli, into the world on April 7, and the new dad celebrated by winning the Denso Spark Plugs NHRA Four-Wide Nationals in Las Vegas two weeks later.

And because Torrence is loathe to point out his recent accomplishments, let us do the dirty work.

He’s just the eighth Pro driver to win four straight championships and just the second in Top Fuel after Tony Schumacher. Pro Stock drivers Bob Glidden and Lee Shepherd and Funny Car drivers Don Prudhomme, Kenny Bernstein, and John Force – Hall of Famers all – are the others to score four. 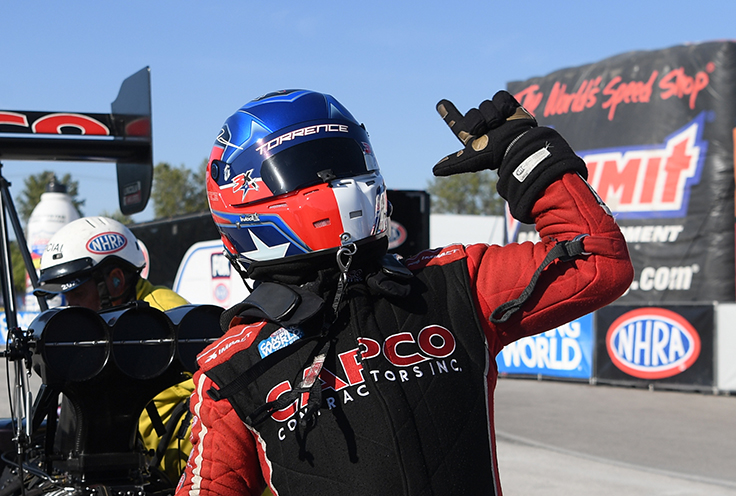 In his four championship seasons, Torrence had won 34 times in the 78 events, or at nearly half of the races. The next best driver has just eight wins over that span, and that person is Torrence’s father, Billy, in the second Capco car. Steve-o also has 11 runner-ups over that four-season span, putting him in the final round of 45 of the 78 events, or at 57% of all events.

He’s just the fifth driver in NHRA history to have at least 50 wins, and his total of 51 puts him one victory behind both Antron Brown and Joe Amato for third place. His 11-win season matched his career-high 2018 output, but he did it in four fewer events.

“This was an unbelievable year,” he admitted. “I got married last year, had a baby this year, and won the championship again. I’m going to be the grand marshal for the Christmas parade in Kilgore [Texas], and they’re also going to rename one of the streets downtown after me. It’s pretty stout.”

Torrence thanked his parents, “Momma Kay” and Billy Torrence; wife Natalie and daughter Haven Charli; Richard Hogan, Bobby Lagana, Justin Crosslin, Mike Wingo, Gary Pritchett, Mike Cleaver, Mike Giaffino, Cale Hood, Kris Martin, and “all of the families of the CAPCO Boys”; Red Line Oil; Mac Tools; Darton Sleeves; and “all of the employees of Capco Contractors in Henderson, Texas, that support what we do day in and out.”