When he clinched his latest NHRA Camping World Drag Racing Series Pro Stock Motorcycle title in Pomona, Matt Smith said that his goal was to be included in any discussion revolving around the class’s all-time greats. Smith believes that his career numbers, including 32 victories and five world titles, compare favorably to anyone else in the class, including fellow multi-time champs Dave Schultz, John Myers, Angelle Sampey, Matt and Andrew Hines, Eddie Krawiec, and two-wheel pioneer Terry Vance.

The truth is, Smith long ago earned the respect and admiration of his competitors. This season was simply a validation of his greatness, both as a rider and a world-class tuner.

“To win one [championship] is hard, for me to win five now is pretty amazing,” Smith said. “I never realized I would do that. When I got started, I wanted to win just one race. Now, to be among the names like Dave Schultz and Andrew Hines is remarkable. And we do this on our own. I don’t depend on anyone else.”

Smith’s fifth championship was easily one of his most impressive. Riding his Denso Buell, Smith won five of the 15 races contested this season, and after winning the Gainesville season opener, he spent just a few days out of first place the entire season. In addition to his 38-9 record in elimination rounds, Smith was also a beast in qualifying, landing outside of the top three just three times.

For someone who not only rides his own bike but also serves as his own crew chief, tuner, and constructor, Smith naturally takes a lot of pride in his performance.

“It’s nice to have low e.t. and top speed,” he said. “In fact, I think I’m close to being the all-time leader in low qualifiers, and that’s one record I’d like to have before I’m done. That’s not the most important thing, though. The way I look at it, if I can’t win, I want to see someone I’m helping win. I’m just as thrilled when [wife] Angie wins or when [teammate] Scotty Pollacheck wins. That’s what keeps me going.”

In March, Smith arrived in Gainesville for the season-opening Amalie Motor Oil NHRA Gatornationals and went right to work, winning the race from the No. 2 qualifying spot. He ran more than 200 mph in all four elimination rounds, including the final against Ryan Oehler to set the tone for the rest of the season. 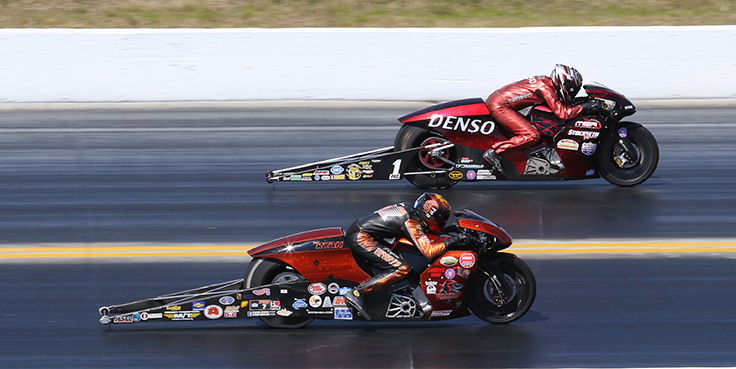 “When we got to Gainesville, I knew we’d be in the fight, but I also felt like the Suzuki people would do a better job of tuning their stuff,” Smith said. “Angelle [Sampey] almost set the record there, and I thought we were in trouble. Of the four or five people that had the four-valve Suzuki stuff all year, I’m just surprised they didn’t run better. Some of them, like Karen Stoffer, Angelle, and Steve Johnson, caught on at the end of the year, and that’s the main reason why I’m building a Suzuki for next season.” 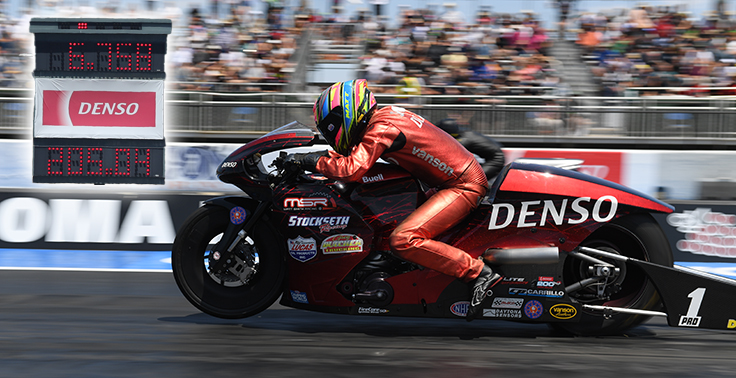 Smith went on to win in Norwalk and again a few weeks later in Denver. He didn’t win in Sonoma, but he clearly left his mark on the bike-loving Northern California crowd with a barrage of double-century speeds, including a record 205.04 that currently stands as the record.

“I was very excited that I went 205 because when you hold the speed record you know you have good power,” Smith said. “I take pride in the work we put in to find all that. Angie’s bike is also very fast.

“We knew we could run that fast, we just needed to get the gear ratios right,” Smith said. “At the four-wide in Charlotte, I was on the rev-limiter for the last couple-hundred feet and still ran 202. I was just afraid to make a change because the bike was running so well. I went for the win rather than the speed, but I knew we had it in us.”

Smith didn’t have a bad race in 2022 except for the Dodge//SRT NHRA U.S. Nationals, his only first-round loss. During the all-important Countdown to the Championship, he dropped to third place after a pushrod broke in the semifinals in Reading, but he quickly regained the lead with a clutch victory in Dallas, beating Hector Arana Jr. in the final round. At that point, Smith began to feel much more confident about his chances. 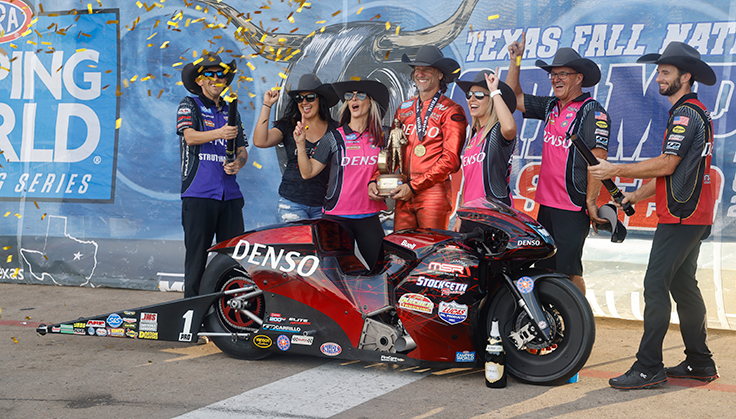 Semifinal finishes in Bristol and Las Vegas were enough for Smith to hold on to the lead, but just barely. Steve Johnson won in Las Vegas, and Sampey posted a semifinal finish. As a result, they headed into the last race of the season trailing by just 20 and 30 points, respectively.

“After we won in Dallas, I felt like we had the bike to beat again,” said Smith. “Even after Bristol, I thought we’d be OK. Yes, the Suzukis were fast, but I still felt like we were in it.

“I messed up against Karen in Las Vegas when she beat me on a holeshot. I know you can red-light at any time on these bikes, and I try to be .030 to .050 on the Tree. If I need to, I can push it, but I just didn’t get it done that time. After Vegas, I was a bit upset.”

Geared up for an all-out fight to the finish when he arrived in Pomona, Smith earned 11 bonus points in qualifying to extend his lead, but in Sunday’s eliminations, it was his riding that carried the day. Smith won two of four rounds via a holeshot, including the crucial quarterfinal race against Sampey and the final, where he faced Stoffer for the third straight race.

“Going to Pomona, I knew that if I did my job and won the race, we’d win the championship,” Smith said. “That was flawless except for the second round when my brake caliper came apart and I went into the sand trap. I just tried to keep the bike upright because if you lay it down, you’re going to tear some stuff up. We put on new brakes, bearings, and a chain and wiped it down and came back and beat Eddie.

“I’m a little shocked that it took two holeshots to get it done; that doesn’t happen all the time. Then, I think that the Suzuki teams won four of the six races in the Countdown. I think they had the best bikes, and I was the better rider.

“Looking back to 2019, I broke in the semifinals in Pomona or I could have won four straight championships and six overall. Still, I’ve done just about everything I wanted to do. Now, I just want to keep on winning more races and more championships. I’m just trying to have fun and please our sponsors.”

For all that he accomplished in 2021, Smith is equally as excited to see what the future holds as he’s already announced an ambitious expansion plan for next season with the addition of riders Jianna Salinas and Jimmy Underdahl. He’s also launching a Suzuki program and expects to join his new teammates aboard an inline four-cylinder bike.

“I’ve never won a race on a Suzuki, and that’s something I’ve always wanted to do,” Smith said. “Obviously, they’re fast, and I think that we’ll have some very competitive bikes in our camp. I’m also looking forward to working with Jianna, I think I can make her a better rider.”