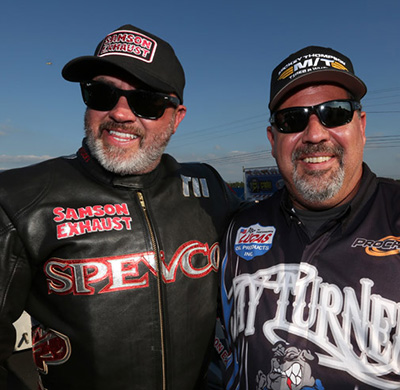 “Win on Sunday, sell all month,” corrected rabid analytics hound Baverstock. “NHRA is a great piece of advertising for Samson. We see it in our sales all during the racing season.”

“We’re focused on NHRA,” agreed Tharpe. “They have a good platform, with TV and thousands of fans, that really helps us.”

“It's nice to see everybody pull together. Hopefully, we can attract a class sponsor for next season in these next four races.”

Tharpe’s Spevco will be going all out, representing themselves and Samson Exhaust on the zMAX midway with a private 3,000 square-foot hospitality center, providing a luxurious space and advertising both companies' products.

“It's a VIP center for our guests, our employees, and our friends,” said Tharpe. “Obviously, Charlotte's the home track for me and Spevco [based in Pfafftown near Winston-Salem]. We’ll have about a hundred employees and guests there, and we're looking forward to educating people about Spevco—who we are, really gain awareness for both our companies, and put Samson at the forefront of Harley-Davidson exhausts. And I think we'll do that. 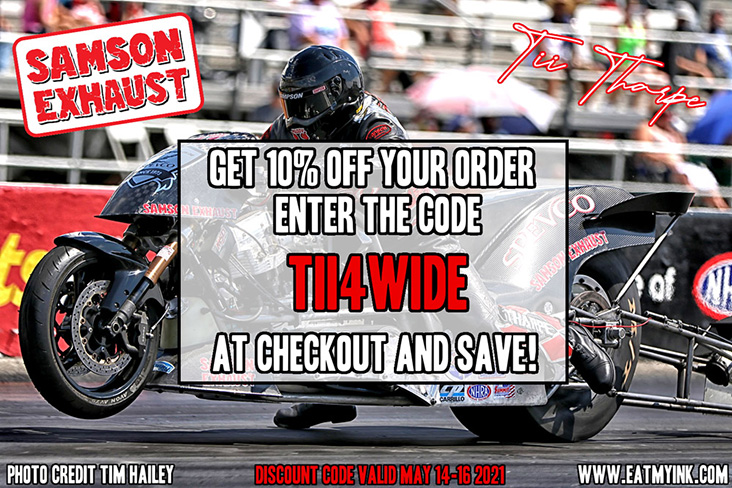 “Mike is going to be giving away a Samson Exhaust system that weekend and is offering a discount code [TII4WIDE] for that event. That's exciting, and he always sees it as a real positive. We’re looking forward to seeing that motorcyclists get their ear-tunes from Samson.

“We’re also looking forward to firing up my bike a couple times in a big way at our exhibit.”

Tharpe admits to being a little overwhelmed by the tasks at hand. “I feel now what Jay Turner has to deal with working on five bikes,” said Tharpe. “Getting the bike decaled, getting the exhibits decaled, getting content built, getting volunteers and staffing, and it’s coming down to the wire. It's not been boring.”

Also on Tharpe’s to-do list is to make sure that the Charlotte business community, who may not have NHRA on their radar, learn what NHRA—and Spevco and Samson—have to offer them. Tharpe knows that this is one big chance to get more than the usual suspects out to the dragstrip. “Oh yeah, our sales staff is definitely working this event,” said Tharpe. “And we hope to get some big-time Charlotte area business leaders right out there on the starting line and show them what fuel is about.

“Usually, I just get to focus on the racing. But this is a good experience for me personally to merge what our companies do with what I love to do, and see if we can generate return on investment. So this is a good case study to go to potential sponsors of our class and say, ‘Hey, this is what I experienced.’

“I'm really excited because NHRA has been good to me, allowing us very good deliverables. I see their deliverables have great value. I would recommend to any potential sponsor that what they have to offer is of value—you definitely get your money's worth.”

“Mike can show those results time and time again, so that is good for attracting a class sponsor. And I'm hoping that if Spevco can lease, rent, or sell a unit, like the hospitality unit, or any of our services, just one time it will justify this one event.

“Maybe we can inject some kind of new life into our motorcycle community, and help find a way to attract more sponsors to the individual teams as well.”

Baverstock has seen Tharpe’s commitment to the class firsthand. “Before I committed Samson to joining Spevco in sponsoring Charlotte, Tii was actually willing to put the sponsorship money he receives from Samson into the Charlotte purse for the class. That’s how important this class is to him.”

And Baverstock expects to see that commitment achieve results on track this weekend—from Tharpe and the whole class. “I think we’re gonna see a helluva show in Charlotte,” said Baverstock. “From the second round of qualifying on, it’s gonna be something to see. Our team is hungry right now, it’s time for us to get a win.”

“We always show up to win, and that is the plan,” agreed Tharpe. “And if Samson and Spevco could be the sponsor of the class at the event and we win, that would just be freakin’ amazing.

“We've not had the opportunity to race at zMAX until now, so we’re definitely looking forward to that and showcasing to the Charlotte community what these Top Fuel Harleys can do, and how the NHRA interacts with fans and sponsors. We're happy to be at Bruton's facility here.

“We're stoked. I think Samson, Spevco, and Jay Turner Racing are gonna make a good appearance, especially from the marketing and track presence side.”