Ron Capps has been teasing the news for weeks, but on Friday afternoon at the Performance Racing Industry Trade Show in Indianapolis, the two-time and reigning NHRA Camping World Drag Racing Series Funny Car world champion made it official, announcing the launch of Ron Capps Motorsports, a new NHRA race team which has Capps pulling double-duty, serving as team owner and driver as he makes a bid to go back-to-back and win a third series title in 2022.

“It’s probably been the worst kept secret out there,” joked Capps of the rumors and speculation surrounding his new single-car team that have been swirling around the NHRA community for weeks. “It’s hard to keep something secret that you’re so excited about, you just want to shout it from the rooftop! But, I’m so thrilled that it’s finally out there.

“Team ownership has been a lifelong dream. I’ve been in the sport of NHRA Drag Racing for almost 30 years as a driver, and being able to race for legends like Don ‘the Snake’ Prudhomme, and then Don Schumacher, it’s obviously been an incredible experience. I’ve been very fortunate to compete at a high level all these years and be successful, and it feels like the right time to take this next step,” explained the 1997 NHRA Road to the Future 'Rookie of the Year' award recipient who has checked nearly every box on the list since making his NHRA debut behind the wheel of a Top Fuel dragster in 1995.

While Capps is set to embark on an entirely new journey during the 2022 NHRA Camping World Series season, from an outsider’s perspective, it might appear to be ‘business as usual’ for Capps and his Funny Car team, as his new operation will look quite similar to the one race fans have grown accustomed to over the last several years.

Joining Capps in his new endeavor is longtime supporter NAPA Auto Parts, which is set to return as the primary partner of the Carlsbad, Calif., resident’s 11,000-hp machine. NAPA has been on-board with Capps for the last 14 years, and together, Capps and NAPA have shared 43 winner’s circle celebrations and two world championships (2016, 2021) since first joining forces in 2007.

“We have built a winning partnership over the years, so it is natural for NAPA Auto Parts to continue working with Ron through Ron Capps Motorsports,” said Marti Walsh, vice president of Marketing, NAPA Auto Parts. “Ron is part of the NAPA family, and the sport of NHRA Drag Racing is in our DNA. We are excited to partner with Ron as he takes on the dual role of owner-driver.”

Additionally, Capps’ entire championship-winning team will remain intact as they join the seasoned veteran on this new venture. Crew chiefs Dean ‘Guido’ Antonelli and John Medlen will continue to call the shots on the NAPA Funny Car and are intent on building upon their 2021 success, which included two wins, five final-round appearances, and four No. 1 qualifier awards in their first season competing together. The team will continue to operate out of the Don Schumacher Racing headquarters located in Brownsburg, Ind. 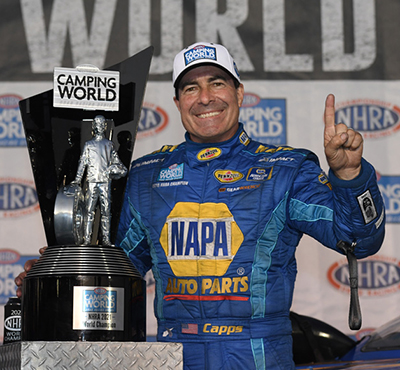 “Obviously, 2021 was one of the toughest Funny Car battles in NHRA history, and it came right down to the wire, but for me, what stands out the most about this past season was working with longtime friend Dean ‘Guido’ Antonelli, John Medlen, and this great NAPA AutoCare team,” said Capps, the second-winningest Funny Car driver in NHRA history with 67 triumphs in the category, and 68 national event victories overall (one Top Fuel). “We were put together last minute in January, and it just reminds you that when you’re surrounded by great people that all share a common goal, great things can happen. We fought through a lot of ups and downs throughout the year, and nobody ever gave up on anybody else, and that’s what made this championship season so great. Race cars are race cars, but it’s all about the people that make that happen, and that’s something NAPA has instilled in me as well.

“I’ve always kept my eyes and ears open and paid attention to these great team owners that I’ve worked for, and always hoped that one day I’d have the chance to own my own team,” continued Capps. “So, a huge thank-you to NAPA Auto Parts for giving me this chance. I’m so excited to go into 2022 and beyond with this incredible team and NAPA’s support.”

Ron Capps Motorsports will make its competition debut at the 2022 NHRA season opener at Capps’ home track in Pomona and is slated to compete in the full 22-race schedule of events.

The team’s manufacturing partner and additional associate partnerships will be announced at a later date.