A month after suffering injuries in an on-track accident, Pro Stock Motorcycle racer Joey Gladstone will rejoin the NHRA Camping World Drag Racing Series tour during this weekend’s Lucas Oil NHRA Southern Nationals in Atlanta. Gladstone was injured in a high-speed mishap during a test session in South Carolina on April 8. Gladstone was thrown from his Outlaw Pro Mod bike following a 208-mph run. His injuries included broken ribs, a broken collar bone, a broken shoulder blade, a bruised lung, and multiple abrasions.

Since the accident, Gladstone has been at home in Virginia, and he’s been engaged in daily rehabilitation sessions, including cryotherapy and a grueling regimen of physical therapy. Having made significant progress, he plans to rejoin teammate Cory Reed for this weekend’s final NHRA Camping World Series event at Atlanta Dragway.

“I feel really good. I’ve been off of any type of pain killer for about two weeks, and I’ve recovered all of my mobility,” said Gladstone. “One of the reasons we opted for surgery on my collar bone was the recovery time. With surgery, it’s healed in about three weeks while it would probably take twice that long if I just let it heal naturally. I’ve actually ridden with a broken collar bone before. When I was 17, I broke it on a Tuesday and raced on Friday. It wasn’t a Pro Stock Motorcycle, but it gave me a good sense of what I could and couldn’t do.

“Since the accident, my goal has been to get back on the bike as quickly as possible,” said Gladstone. “That has been the goal that’s kept me motivated through all this physical therapy. The broken bones didn’t really bother me. My biggest concern was some of the road rash, but just about all of the skin has grown back, and I don’t have any problem putting on leathers or gloves or anything. Honestly, I wouldn’t be doing this if I didn’t feel comfortable getting back on the bike, but I feel like I’ve come through this whole deal pretty well.”

Gladstone has good reason to want to get back to Pro Stock Motorcycle competition. At the season-opening Amalie Motor Oil NHRA Gatornationals in Gainesville, Gladstone and teammate Cory Reed debuted two new Suzuki entries prepared by the Vance & Hines team, and they were two of the quickest bikes in the field. Using the new four-valve engine combination, Gladstone qualified No. 3 with a career-best 6.783 elapsed time.

Gladstone missed the Denso Spark Plugs NHRA Four-Wide Nationals in Las Vegas, and as a result, he’s dropped to No. 15 in the standings, but he’s just 23 points out of the Top 10 and 169 points in back of current leader Ryan Oehler. Just three races into the season, Gladstone believes he can quickly make up much of the lost ground. 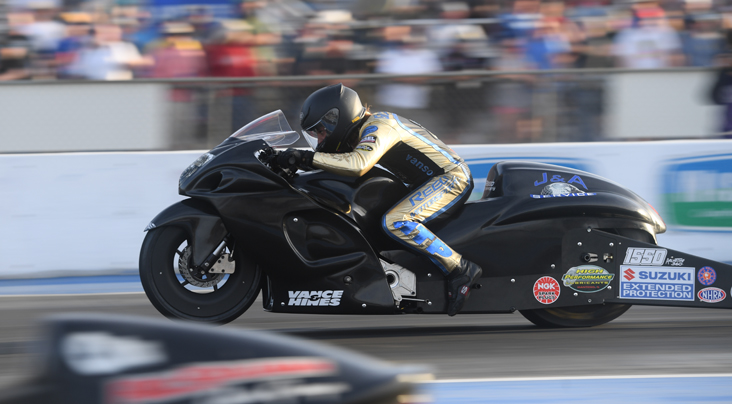 When it comes to safety, Gladstone also acknowledged that he learned a few lessons from his accident, and he’s more than willing to share the experience with his competitors, or anyone else who races a motorcycle.

“First off, I was racing a grudge bike when I crashed, and I wasn’t wearing the usual leathers I’d wear at an NHRA race,” Gladstone said. “I have a thin, lightweight suit that I had made, and it was against the better judgment of the company that made it. I won’t ever wear a thin suit again. I also plan to wear thicker gloves and a much better boot that is designed for racing. My Shoei helmet did an amazing job protecting my head so I’m going to get a new one this week. I’ve raced for a long time and haven’t had any issues, and I’ll admit that sometimes you can get a bit complacent. At the end of the day, I take responsibility for everything that happened, and I’m happy to share what I’ve learned to hopefully help someone else avoid a serious injury.”

Gladstone admits that when he gets to the Peach State, he’s got his work cut out for him. There are 22 Pro Stock Motorcycles on the pre-entry list, including world champions Matt Smith, Jerry Savoie, Andrew Hines, Eddie Krawiec, and Angelle Sampey, and a total of 13 riders who have previously won NHRA national events. Gladstone and Reed are hoping to join that list but acknowledge that they first must qualify for Sunday’s final eliminations. And they have just two qualifying sessions to do so.

“I’m excited to see how it all works out,” Gladstone said. “With 22 bikes, you’ve got to work for it. It's also cool to see Eddie and Andrew back. That’s just going to make the class that much tougher. I’m just really happy to have the opportunity to get back on a bike.”