Stop us if you’ve heard this one before: The all-conquering Meyer Racing A/Fuel Dragster reaches the final round of the fall Las Vegas national event and stages up for a winner-take-all race with the world championship hanging in the balance.

Last year, it was Megan Meyer winning her second straight world championship by winning the final round in Vegas, and this year, it was her younger sister, Rachel, who deftly slipped into her sister’s championship-winning car and rode their father Randy’s powerful tune-up to yet another season title.

Megan retired with a mic-drop moment last year, and the team missed nary a beat as Rachel won three national events and three regional events in the same car and battled Jackie Fricke down to the wire in Las Vegas for the championship.

It was an amazing breakthrough season for the younger Meyer sister, who won the Central Region championship last year but only competed at a few national events due to work responsibilities and was still looking for her first national event win entering the season in a battle-tested car that still owns the national record.

“My dad can get that thing to run pretty fast, and I’d like to think I’m not too bad of a driver either, but it was a combination of both,” she said. “We always try to make our cars as identical as possible, but I don’t know what it is about that car, but it seems to run better.”

Meyer started her season with her NTK-backed dragster with a runner-up at the Central Region event in Belle Rose, La., but a first national event win wasn’t long in coming as she quickly won the Amalie Motor Oil NHRA Gatornationals, defeating Fricke in the final, though neither of them knew that it was just the beginning of an intense and entertaining rivalry.

“Jackie and her team always run pretty good, and I feel like she’s been a top-five contender for the last few years,” she said. “I didn’t really know at that point what to expect yet about who the championship was going to come down to or anything like that. I was just happy to be racing there.

“I missed my flight [to Gainesville] and missed Q1 and almost missed Q2. I literally got to the track and my dad came and got me, I went and put my firesuit on, and we went right up there for Q2.

“It was great to get that first win because I was feeling under pressure because that was the first time I’ve had a title sponsor, so I wanted to make them proud. It was just pretty exciting. I didn’t really know what to think because I was just caught up in all the emotions and the craziness of that weekend.” 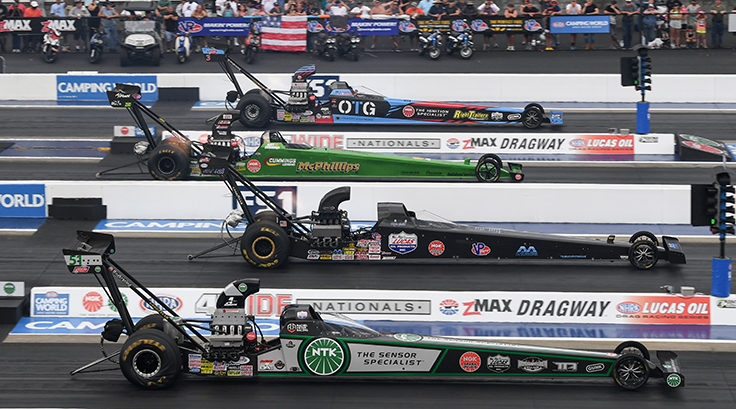 She didn’t rest long on those laurels, adding national event wins in Charlotte and Houston to boost her score and give her the first inklings of a championship season.

“We were off to such a good start it’s hard not to think that way,” she admitted. “At some point, I did the math to see who had to do what to pass us and whatnot. A lot of people say don’t do that because then it all gets to your head, but I definitely kept track of the points and knew what everyone had to do.”

The real challenge began to crystallize in September after Fricke won the NHRA U.S. Nationals after beating Meyer in the semifinals then beat her in the final round of the St. Louis regional and in the second round at the Dallas national event.

“I didn’t know it would come down to all of us until she won Indy, and then I realized that she did still have a good shot at winning,” said Meyer. “Then she took me out in Dallas, so I stuck around that next day just to see how she ended up doing because at that point she was the only one left that could take the championship from us.”

It all came down to Las Vegas, where Meyer was out of races to earn points and came to Las Vegas to try to stop Fricke, who needed to win the event in her last-points-earning race. Of course, the two ended up on opposite sides of the ladder, setting up the climactic showdown.

“We both have really good cars, so I knew there was a good shot that it was gonna happen that way. Towing up for the final, I was really nervous, and then there was an oildown in front of us, so I had to sit in there even longer, and my stomach just kept churning. I kept trying to just take deep breaths and singing a song to get my mind off of what was about to happen.

“I kept telling myself that no matter what happens, it’s been a really good year, and I was just really happy to even be in that situation. And I like Jackie and her team; they’re great people. So, either way, I was gonna be happy with whoever ended up winning. I mean, I would have been sad, of course, but it would have been OK.

“I didn’t see her at all in the final. I couldn’t hear her. I was just hoping that I was in front of her because there’s been a handful of times where I’ve raced Megan and it came down to a .00-something finish line where I thought I was in front, and Megan got the win. When I saw that win light come on, I got really excited. I didn’t really know what to expect this year, and I told my dad my goal was to win a national event win, so the fact that we ended up winning the championship was crazy.”

And, just like big sister Megan last year, Rachel may not defend her championship, deciding to tailor back her 2022 racing schedule to focus more on her family and job.

“Now that I’m married, we might try for some kids, but that doesn’t mean I’m retiring or anything. I’ll always want to race something, I’m just not sure what kind of schedule yet, but we’ll just have to see what happens.”