Greg Stanfield thought his days as an NHRA Super Stock champion were nothing more than a distant memory. He was mistaken. More than a quarter-century after winning his fourth Super Stock title in a five-year span, Stanfield is once again an NHRA Lucas Oil Drag Racing Series champion.
07 Dec 2021
Kevin McKenna, NHRA National Dragster Senior Editor
2021 world champion profile

Greg Stanfield thought his days as an NHRA Super Stock champion were nothing more than a distant memory.

More than a quarter-century after winning his fourth Super Stock title in a five-year span, Stanfield is once again a NHRA Lucas Oil Drag Racing Series champion following a monster season that included four wins and a runner-up in eight scored events.

The funny thing is, at the start of the season, Stanfield had no intention whatsoever to get caught up in a season-long points battle. He was more than content to help his many engine customers and to further the career of his son, Aaron, a rising star in Pro Stock and a two-time Constant Aviation NHRA Factory Stock Showdown champion. It was Aaron who urged his father to pursue the title, and winning two of his first five races didn’t hurt either.

“It’s funny how that works,” Stanfield joked. “This is all on Aaron. I’m blaming him for all of it. I just wanted to come out and race a few times, maybe have some fun and win a few rounds. Aaron said, ‘You need to get out there and race.’ I really didn’t want to do it, and winning another championship was the furthest thing from my mind. I wasn’t going to do it, but Aaron and my wife [Cynthia] and my brother, Mike, the guys at our shop kept pushing.”

Perhaps even more remarkable than Stanfield winning titles more than a quarter-century apart is the fact that he has driven the same ’87 Chevy Camaro to all five titles. The car was sold to Scotty Richardson in the late 1990s and went through a couple of owners before the Stanfields bought it back more than a decade ago.

“This car is like a part of our family,” Stanfield said. “I’m not sure how to figure its winning percentage, but it’s pretty high. We bought it back, and [Super Stock racer] Jeff Dona restored it. Technically, it’s Aaron’s car, but he lets me drive it. They make fun of me when I get in it. They play the old ‘Reunited’ song.”

Stanfield started the season on fire with wins at the Lucas Oil Series divisional races in Houston and Dallas. At that point, he may have begun to realize that a championship might be in the offering. If not, he surely came to that conclusion after winning a third divisional event in Tulsa, Okla., in early June.

The one potential stumbling block to Stanfield’s season came when his teammate and traveling partner Craig Gaultiere crashed after winning the semifinal round in the Division 4 event in Dallas. Gaultiere was to have raced Stanfield in the final round but was obviously unable to make it. At the time, Stanfield thought about abandoning the title pursuit, but his team was having none of it.

“I felt really bad after Craig’s accident,” Stanfield said. “I was not just going to go racing by myself. Aaron and Conner [Statler] and Colin [Jackson] and the rest of our crew were pushing hard for me to stay out there. We got lucky and found another car for Craig, and we got him back on track fairly quickly.”

Quiet for most of the summer because he was helping Aaron win his second Factory Stock title, Stanfield resumed the chase in the fall and quickly began to rack up more points with a runner-up at the rain-delayed Mopar Express Lane NHRA SpringNationals presented by Pennzoil, the Houston event that was contested in Dallas. Stanfield also reached the semifinals of the Texas NHRA FallNationals the same weekend, giving him the upper hand in the title chase. 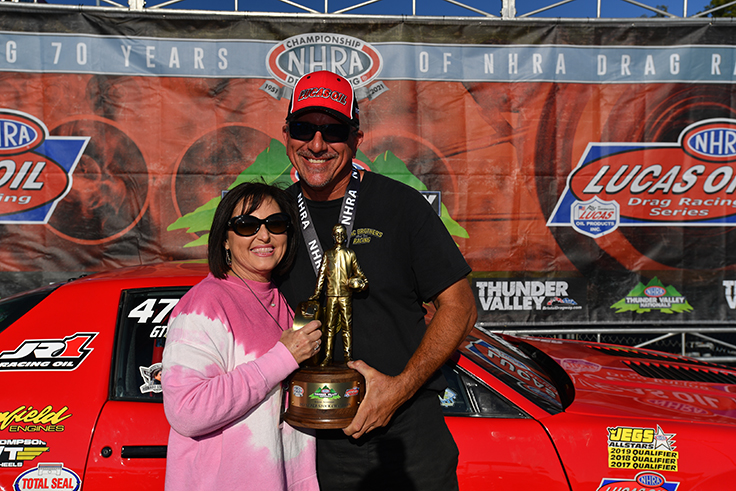 Stanfield all but closed the door a week later when he won the NHRA Thunder Valley Nationals in Bristol to move his score to a healthy 692 points, which is almost enough to guarantee a title in any NHRA Sportsman class. A native of Tennessee, Stanfield had long coveted a Bristol victory.

“The first time I raced in Bristol was 1981,” Stanfield recalled. “My dad [Howard] took me there. Dad was born and raised in Bluff City, Tenn., and could hear the track from his house. Dad won there, and Aaron won there, and it was really cool after 40 years for me to get a win there.”

Stanfield officially clinched the title when Joe Santangelo II, his closest pursuer, didn’t enter Super Stock at the Las Vegas event. Santangelo was, however, on hand to present Stanfield with his winning time slip during the event.

“I made my first run, and he handed me the time slip and said, ‘Congratulations, Champ’. I was stunned,” Stanfield said. “My uncle [Allen Stanfield] used to race Comp with Joe’s dad in Division 1, but I really didn’t know him that well.

“I’m still a bit shocked that I pulled this off,” Stanfield said. “I’m not as good as I used to be, but I can still do it. Back in the day, I didn’t think I had any weakness, but today, I do. I’m also impressed at how good everyone else is. I just got lucky when I needed to be.”

It’s hard to say that Stanfield’s fifth title is any more meaningful than his first four, but winning a title the same year that Aaron won his second Factory Stock title is a thrill he’ll never forget.

“Aaron didn’t have it easy this year; he really had to work for that second title,” Stanfield said. “He struggled in the middle of the year, but he toughed it out. That was neat to see. I never pushed him to race. I wanted him to make his own decision, and he did. I don’t have the fire that I used to, but he does. He won three Pro Stock races this year. I think I won three in my career.”

Stanfield isn’t the sort of guy who is going to pat himself on the back. Instead, he’s quick to credit those around him for his success, including son Aaron, wife Cynthia, and brother Mike, as well as the team at his shop, Stanfield Racing Engines. He also thanked JD and Terrisa Coffman of JC III Energy Service, David and Joe Janac, Pat Quinn, Craig Gaultiere. Arthur Kohn, and “all of our engine customers and the many manufacturers who have taken good care of us over the years.”