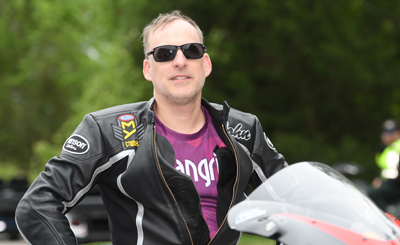 John Hall, a two-time winner in the Pro Stock Motorcycle category, will rejoin Matt Smith Racing in 2021 beginning with the upcoming Amalie Motor Oil NHRA Gatornationals. Hall will race a V-Twin EBR that is backed by FireCore 50 ignition wires and will be a part of a four-bike effort that includes Smith, his wife, Angie, and Scotty Pollacheck. Current plans call for Hall to compete in a minimum of three NHRA Camping World Drag Racing Series events, but he has left open the possibility of adding several more.

“With the help of FireCore 50, I’ve made a three-race commitment to Matt Smith Racing to start the season, and I’m really happy about that,” said Hall, who defeated Smith to win the 2013 NHRA U.S. Nationals title. “We’re going to Gainesville, Atlanta, and Norwalk for sure, and I have the potential to add some more; actually, as many races as I’d like, depending on how things go. I had a lot of fun racing with Matt, Angie, and Scotty in 2013 and 2014, and we had a lot of success winning two races. They’ve put together a great program, and I’m happy to be a part of it.”

Hall, of Hamden, Conn., made his debut as an NHRA Pro racer in 2012. The following year, while riding as a member of Smith’s team, he won a pair of races, including his home event in Epping, and the prestigious U.S. Nationals at Lucas Oil Raceway at Indianapolis. He also reached the final round of the 2014 NHRA Four-Wide Nationals in Charlotte. Last year, Hall competed in six events and reached the quarterfinals in Gainesville while riding a Suzuki as part of Jerry Savoie’s White Alligator Racing team.

According to team owner Smith, Hall will be riding the same EBR that Angie rode last season, including a win at the season-ending Dodge NHRA Nationals in Las Vegas and a spot in the Denso 200-mph Club. Angie will debut an all-new EBR in Gainesville. Last year, the Smith team flourished with Matt winning his fourth Camping World Drag Racing Series championship. Collectively, the three-bike team won half of the eight races on the schedule as well as the $25,000 Mickey Thompson Pro Bike Battle. All three MSR riders are also part of the Denso 200-mph Pro Stock Motorcycle Club.

“The last time that bike was at an NHRA race, it turned on the win light in the final, so I know that John is getting a great bike,” said Matt. “John is also a great rider; we’ve worked with him before, so I don’t have to teach him much. That makes it much easier to expand the team to four bikes. We’ve done it before, and it’s a lot of work, but we are prepared for it. Last year, all three of our bikes won races, we all ran more than 200 mph, and we all finished in the Top 5. I’d like to do that again and add John’s name to the list.”

Hall also acknowledged that he’s had discussions with Ryan Oehler regarding a two-bike EBR program. After winning his first race last season, Oehler has made it known that he’d like to field a second bike this season.

“Eventually, I’d like to do some races with Ryan, but for now, I have made a commitment to Matt’s team,” Hall said. “To be honest, I really love riding a Suzuki, but the opportunity wasn’t there this season. Ryan and I have talked quite a bit, but going from one bike to two is a big step. Ryan isn’t going to just rush into it without being prepared. He doesn’t want to just go from point A to B. He wants two competitive bikes. Running two bikes is hard, so I don’t think people realize what Matt does to be able to run four. It’s a huge commitment.

“I know that Matt wants to put another rider in the Denso 200-mph Club, and I’d love to be the next one to do it, so that’s my focus for the immediate future,” Hall said. “I just want to go out, be competitive, and have some fun. The whole Pro Stock Motorcycle class is going to be interesting this year with the new four-valve Suzuki engines. I assume they’re going to be very fast, but I have a lot of faith in the program that Matt has put together.”

Current plans call for Hall to Join the Smiths and Pollacheck for a test session in Bradenton, Fla., on Monday and Tuesday, March 8-9, before arriving in Gainesville on Wednesday for the Amalie Motor Oil NHRA Gatornationals.