It took all of one race to know this year’s NHRA rookie class had at least a bonafide contender. By the fourth event in the 2021 season, it became clear this was going to be one of the most impressive rookie of the year duels in the last 20 years led by Dallas Glenn and Josh Hart.
08 Oct 2021
Josh Hachat
News

It took all of one race to know this year’s NHRA rookie class had at least a bonafide contender. By the fourth event in the 2021 season, it became clear this was going to be one of the most impressive rookie of the year duels in the last 20 years.

Both Dallas Glenn and Josh Hart have impressed at every turn, leading to one of the most exciting rookie of the year battles in NHRA history. Each has two victories heading into this weekend’s race in Dallas, just the third time since 2002 that two rookies have had two or more wins in one season.
The last came a decade ago in 2011 when Vincent Nobile and Hector Arana Jr. each won three races in Pro Stock and Pro Stock Motorcycle, respectively, with Arana finishing second in points to help claim the NHRA Rookie of the Year award.

In 2005, Robert Hight and Chip Ellis both won two races, but with the way Hart and Glenn have performed, it might take a third win — or more — to claim the prestigious honor.

“I’ve thought about it a little bit, and I’m trying to win as many races as I can and race the best I can,” Glenn said. “After Josh won in Charlotte, it started to get really interesting. It should be pretty exciting. Hopefully, we can get another win and try to seal the deal.”

A third win might be a huge deciding factor, though it also wouldn’t be surprising to see both drivers win three or more races in 2021. Hart, of course, announced his presence in Top Fuel right off the bat, winning in his first start and becoming just the sixth driver in NHRA history to do so. He continued to perform at a high level, advancing to the final round in Charlotte before having to take a series of races off this summer.

Glenn won in Charlotte in just his fourth Pro Stock start and seemed to take control of the race with Hart on the sidelines, winning in Topeka and doing so with a perfect .000 reaction time in the final round — becoming just the sixth Pro Stock driver in history to have a perfect light in the championship round.

Hart, though, answered back by beating Brittany Force on a holeshot at the second Charlotte race last month, sending him right back into contention with four races left in the season (and three for the Pro Stock class).

“I think it would be amazing to win it,” Hart said. “Obviously, with all the trials and tribulations we went through this summer, I wasn’t thinking about that. But we made history that first race, and we want to be the real deal. This means the world to me, and I would definitely love the honor of being rookie of the year.” 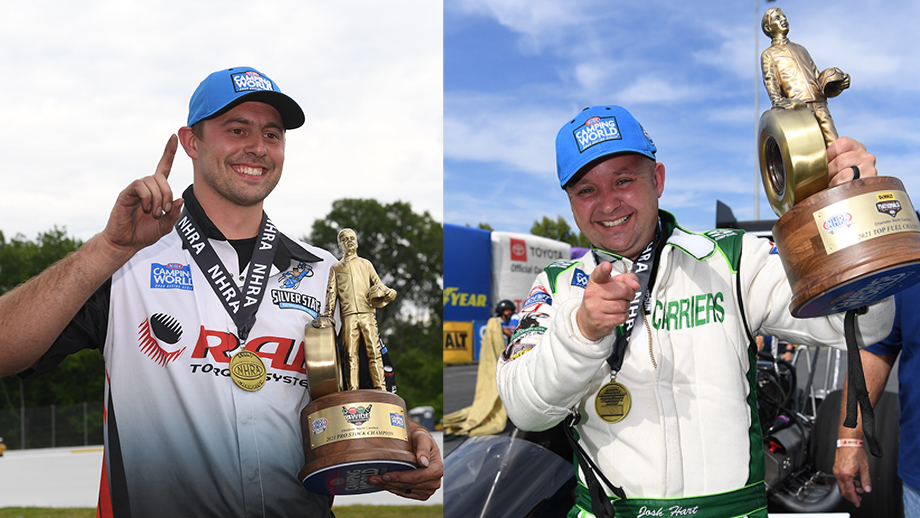 Both have other distinct aspects on their side. Replacing Jason Line, who was named the top rookie in 2004, this season has been a dream come true for Glenn. He’s advanced to four final rounds, competed at every race, and is fourth in points heading into the late stages of the season.

After waiting for this opportunity for years while working closely with Line, Glenn secured a sponsorship for a full season this year and next with RAD Torque Systems, and he’s made sure to take advantage to the fullest extent. He’s been dynamite on the starting line and laid the groundwork to become a force in the class for years.

“We’ve been more focused on trying to win and compete for a championship, and I’ve gotten a lot more comfortable in the car,” Glenn said. “We’ve made so many changes to the car from the beginning of the season, it doesn’t behave like the same car at all. I’m sure I’ll sit back and think about this first year at some point, but the only thing I’m trying to do is crush everybody right now.”

Hart, meanwhile, has built his Top Fuel operation from the ground up, putting together and funding a team while securing his own sponsorship as well.

His work behind the scenes to build a formidable team has been impressive and is a clear indicator that Hart is going to be a major player for the long haul. He’s ahead of schedule, too, and while the Countdown to the Championship isn’t in the cards this year, Hart has been a heavy hitter and, now, a rookie of the year contender in what could be one of the closest votes in recent NHRA history.

“The success is a testament to how much we’re invested in NHRA racing. We’re working our tails off, and we go out to win every race,” Hart said. “I’ve never been one to shy away from adversity, and I use it as fire to motivate myself. I’ve got so much respect for all these teams and drivers, and I still get starstruck because I was such a big fan. I really, really enjoy the competition. It’s been second-to-none.”