Drag racing legend Don “the Snake” Prudhomme will once again compete in the Yokohama NORRA Mexican 1000, April 23-30. Prudhomme will be competing in the Modified Turbo UTV class driving a Can-Am UTV with backing from MAVTV.
07 Apr 2021
Posted by NHRA.com staff
News

In 2018 and 2019, drag racing legend Don “the Snake” Prudhomme took to the desert to chase a dream started in the early 1970s. The Hall of Fame driver was looking to complete a race that was derailed by engine malfunctions before it even started more than five decades ago. His adventures during those National Off-Road Racing Association (NORRA) Mexican 1000s made the 80-year-old racer more than a Baja racing enthusiast. Thanks to a partnership with MAVTV, Prudhomme will be returning to the wide-open racing spaces of Southern California and Mexico for the 2021 Yokohama NORRA Mexican 1000, April 23-30. Prudhomme will be competing in the Modified Turbo UTV class driving a Can-Am UTV. 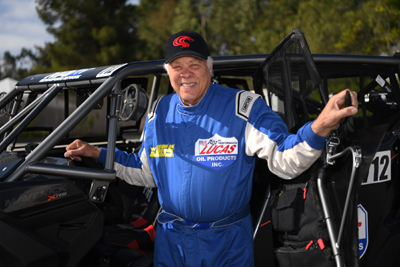 “I want to run hard and have fun,” said Prudhomme, who finished the 2019 Mexican 1000 in 16th place. “The great thing about this race is you don’t know the course until a couple days before you take off. NORRA doesn’t want anyone pre-running the course, so that will make it exciting. I feel more confident every time I do this, and I have to thank MAVTV for coming along for the ride.”

During his last Mexican 1000 race, fuel pump issues on the last day had the team battling to get to the finish line. This year along with navigator and support driver Rich Minga, Prudhomme is looking to improve on that effort. He will once again have PJ Jones assisting with equipment and on-course support.

“I will be doing a lot of the driving, but Rich will also jump behind the wheel and I’ll navigate. It is a long route, and we want to be competitive. I hated to miss the race last year because of everything going on, but there was no way I was going to miss this race again. It is just too much fun,” added Prudhomme.

“Teaming up with a legend like Don Prudhomme for the Mexican 1000 is a great partnership for MAVTV and Lucas Oil,” said Brandon Bernstein, Lucas Oil director of Partnership Marketing. “The interest in off-road racing is growing every year, and there is a huge audience of motorsports viewers on MAVTV. We know tons of people will be keeping an eye on Prudhomme’s progress throughout the race.”

The Mexican 1000 is a five-day, off-road rally run by NORRA as a celebration of off-road racing history and vintage off-road machinery. Cars, buggies, trucks, and motorcycles from all eras of Baja racing are eligible to participate in a variety of classes. The race begins Friday, April 23 in Ensenda, Baja, Mexico, and ends Friday, April 30, back in Ensenda. The course has been rerouted for 2021 to work within COVID-19 protocols and will be a 1,000-mile loop.