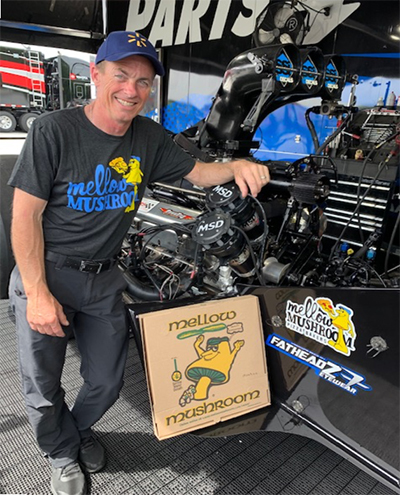 “Having Mellow Mushroom and their mission of providing delicious food in a fun and creative environment added with Clay and our professional race team takes me back to the good old days of drag racing when the Atlanta Dragway opened way back in the groovy culture of the ‘70s,” said team owner Doug Stringer.

Mellow Mushroom has been the originator of hand-tossed, stone-baked classic southern pizza which was founded in 1974 in Atlanta. For more than 40 years, Mellow Mushroom Pizza Bakers has been serving up fresh, stone-baked pizza to order in an eclectic, art-filled and family-friendly environment. Each Mellow is locally owned and operated and provides a unique feel focused around great customer service and high-quality food.

“Clay and the team at Stringer Performance engage race fans across the country across media channels and in person. That focus on the fan is what attracts us to working with this team. Mellow Mushroom and our franchisees join together with race fans across the country to wish Clay good luck this weekend. We’ll have the pizza and beer ready to celebrate” said Anne Mejia Mellow Mushroom VP Brand Development.

Millican knows all about the 1970s and drag racing as a kid growing up in Tennessee he would travel down south to watch the greats like “Big Daddy” Don Garlits and Shirley “Cha Cha” Muldowney take the track and dream of becoming a superstar in professional drag racing. Ironically, right when Millican was going to the drags for the first time a higher order of pizza was being born in Atlanta with Mellow Mushroom.

“I know way, way back growing up in the ‘70s I ate a lot of pizza,” said Millican, “but nothing could have been as good as this Mellow Mushroom pizza! Our crew members and VIP guests in our hospitality area this weekend will love this far-out southern classic.”