By the time the divisional race in Houston ended in early April, Jimmy Lewis figured his chances at a championship in Top Sportsman were already finished. He was wrong.
06 Dec 2021
Josh Hachat
2021 world champion profile

By the time the divisional race in Houston ended in early April, Jimmy Lewis figured his chances at a championship in Top Sportsman presented by Vortech Superchargers were already finished.

He hurt a valve in his engine, and more than three months passed before Lewis got the necessary parts and got back to the racetrack.

“I was thinking by then I didn’t have a chance,” Lewis said.

Lewis didn’t need Clark, but from the moment he returned to the track in July he went on his own cross-country expedition, making long trips, visiting tracks for the first time, and pulling off an unbelievable late-season surge.

He ended with four wins and five final-round appearances in a three-month span and plenty of miles on the odometer — and a first career Top Sportsman world championship made it all worth it.

“I keep looking at the points every day just to make sure I’m still on top,” Lewis joked. “I’m very happy and very blessed, and it’s kind of hard to believe we ended up with the championship with the season I had.”

It was certainly improbable, as Lewis didn’t return until mid-July when he made his first-ever appearance at Bandimere Speedway for the Dodge//SRT Mile-High NHRA Nationals. He made a good first impression, too, taking his ’10 GXP to the winner’s circle with a spectacular showing that gave Lewis his first national event win in Top Sportsman in nine years.

“That’s somewhere I’ve always wanted to go, and to win on the mountain, that was really special,” Lewis said. 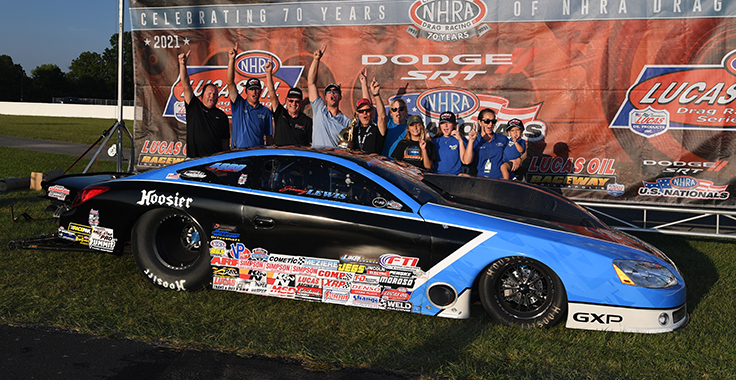 A championship wasn’t in the conversation yet, but Lewis was just getting started. He rolled into the Dodge//SRT NHRA U.S. Nationals and took out a host of marquee competitors, knocking off Allen Firestone in the final round with a terrific performance.

It also gave Lewis his first career win at the Big Go in Top Sportsman as he picked up steam in incredible fashion. 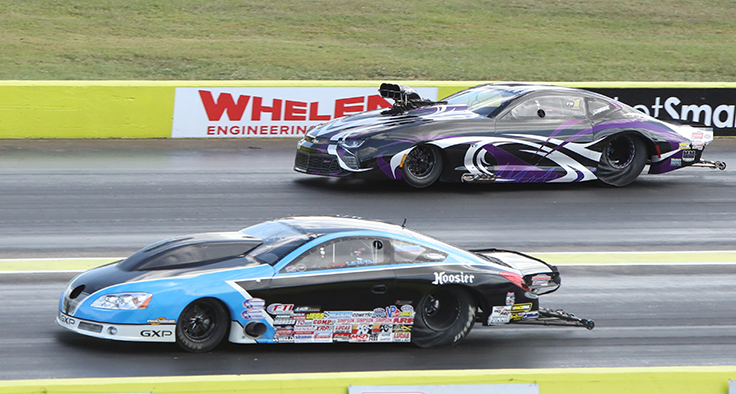 Lewis grabbed another win a month later, this one coming at Texas Motorplex, which kicked off one of the wildest three-week stretches in his racing career. Lewis knocked off defending world champ Darian Boesch in the final round, surging into the championship chase.

With a trio of victories in hand, the Forney, Texas, native started plotting what it would take to make a late-season run at a title.

“In Indy, it started to cross my mind, and then we won Dallas, and I thought I better look at a calendar,” Lewis said. “I thought I could maybe pick up a couple races I hadn’t planned on hitting, and after we won Dallas, I had to go for it. You don’t always get an opportunity like that.”

That meant Lewis was heading straight from Dallas to Tucson, Ariz., where he again put on a terrific show, rolling to a second win in as many weeks.

He went 4.258 with a dial-in of 4.25 in the final round against Craig Liles, getting the starting-line advantage and never looking back. That was his 20th NHRA Lucas Oil Drag Racing Series Wally, and he headed back to Texas knowing he was about to make another long trek the following weekend.

After working a few days, Lewis headed to Rockingham, N.C., and while the weekend didn’t go as planned, going out in the first round, it showed Lewis’ unrelenting desire to win a championship.

“After winning in Tucson, I looked at the calendar, and I got some texts telling me I needed to go to Rockingham,” Lewis said. “I didn’t drive really well, but we put ourselves in position to win it.”

Of course, Lewis had to head back to Texas and then on to Las Vegas in just a couple weeks, but he was ready for the challenge.

Needing a big weekend at the divisional race at The Strip at Las Vegas Motor Speedway, Lewis came through in the clutch, advancing to the final round to slip past Paul Mitsos in the points standing and claim his first world title in Top Sportsman.

Lewis won his first world title in Super Gas in 1998, and more than two decades — and one of the busiest months of his racing career — later, he was thrilled to claim a second title.

“We hit the ground running in Denver, and it was almost a whirlwind from there to miss that many races and still win a championship,” Lewis said. “It was definitely rewarding, and everything just fell into place, even with missing all those races.

“It’s very sweet anytime you get a championship, so to get a second one is really sweet. I’ve been running Top Sportsman on and off for about the last 10 years, but I’ve never really had a full season. There’s some years where I’ve driven better than this year, but things just really came together. It’s been really special.”

Lewis has become a huge fan of the Top Sportsman class, noting his love of fast doorslammer cars. He’s continually at the top of qualifying, and Lewis’ driving was stellar throughout eliminations during several pressure moments this season.

Lewis is now eager to defend his title during what he hopes will be a far more traditional season. He missed the double divisional at his home track in Dallas this year and another close divisional race due to the early cars and parts troubles, something he hopes doesn’t happen again in 2022.

“I only got to run one Division 4 race, and that’s where I prefer to run,” Lewis said. “I’ll head back to Denver, too, but I really like this class. There’s a lot of great drivers.”
But none were better than Lewis in 2021.

Lewis also extended his thanks to his wife, Phyllis, who does a considerable amount of work at the track, John Kyle and Joe Hessling at Advanced Product Design (APD), Rossler Transmission, who turned around a transmission in a day after Lewis broke a transmission in St. Louis, Faron Lubbers and Robert Perryman at Hoosier Tire, Dave Connolly, Jack Campbell, Jerry Bickel Race Cars, Adam Drzayich at Sportsman Racer Services, Eric Davis at Penske Shocks, and Greg Samuel at FTI Converters.