On Saturday of the 11th NGK NTK NHRA Four-Wide Nationals Kalitta Motorsports drivers Doug Kalitta, Shawn Langdon, and J.R. Todd spent some time throughout the final day of qualifying with 12-year-old Camden Nobles and his family.
15 May 2021
Posted by NHRA.com staff
News

On Saturday of the 11th NGK NTK NHRA Four-Wide Nationals Kalitta Motorsports drivers Doug Kalitta, Shawn Langdon, and J.R. Todd spent some time throughout the final day of qualifying with 12-year-old Camden Nobles and his family. Camden was the team’s special guest thanks to Kalitta Motorsports’ relationship with A Kid Again, a national nonprofit organization fostering hope, happiness, and healing for children facing life-threatening conditions and their families.

“It was really cool to sit in the race cars and talk about how fast they go,” said an excited Camden. “This was a lot of fun for my family. I got a lot of autographs and had a lot of fun.” 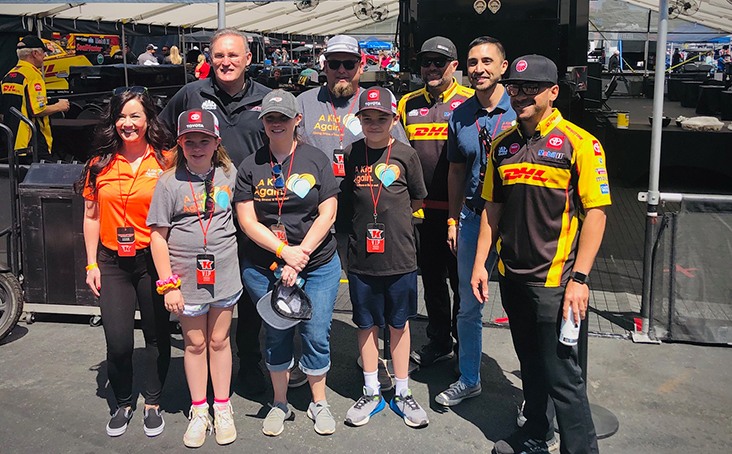 Before the first qualifying session, Camden along with his sister Bliss were treated to a tour of the entire Kalitta Motorsports pit area including all three race cars, technical and support trailers and hospitality area. The tour was initially led by Doug Kalitta who showed off his Mac Tools Top Fuel dragster as well as teammate J.R. Todd’s DHL Toyota Camry Funny Car. Kalitta walked Camden and Bliss through the warm-up procedure as well as how the brakes and steering worked on each vehicle. The two youngsters took turns sitting in the respective cockpits while their parents and A Kid Again representatives looked on.

“It was great to meet Camden and his family,” said Kalitta, a father of two. “We are excited about the partnership with A Kid Again and I had a good time showing Camden and Bliss our DHL Funny Car and my Mac Tools Top Fuel dragster.” 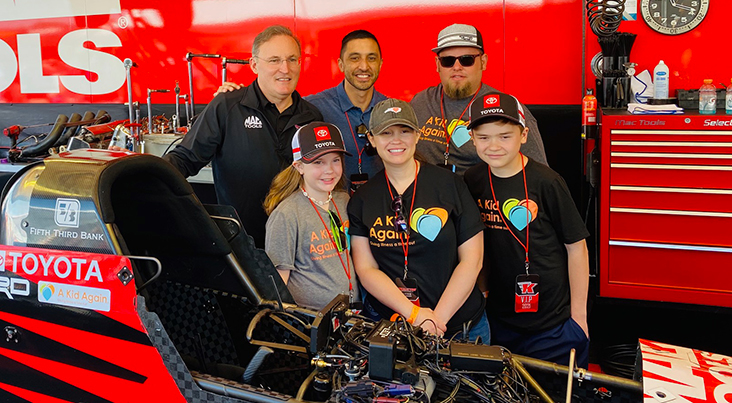 Following the tour by Kalitta, the group chatted with Langdon and Todd in the DHL Kalitta Air Top Fuel pit area about Langdon’s 11,000 horsepower race car. The drivers explained the racing strategy and what it feels like to make a run at over 320 mph in less than four seconds.

Camden and his family were also given a private photo and autograph session to commemorate the day. The family watched qualifying runs from reserved seats just off the starting line at zMAX Dragway. At the end of the day, the Nobles family had a mountain of memories from their day enjoying NHRA Camping World Drag Racing Series and the Kalitta Motorsports team. 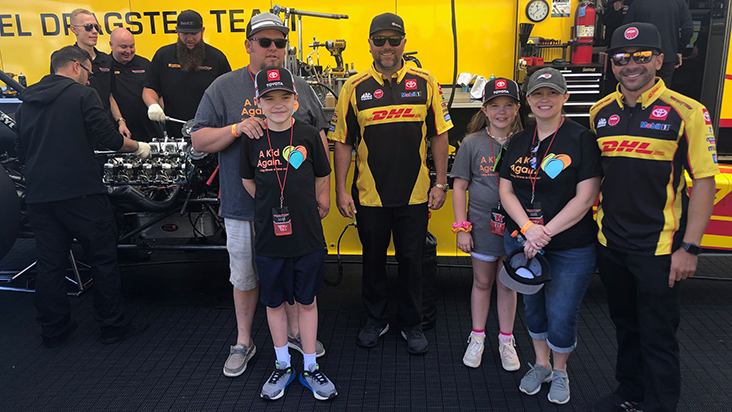 “Everyone at A Kid Again is so thankful for the chance to bring a family-like Camden’s to the races thanks to Kalitta Motorsports and their drivers,” said Oyauma Garrison, President and CEO of A Kid Again. “The Nobles had an amazing adventure and we are looking forward to hosting more families at future events. Today was just a perfect day for Camden and his family to make some once-in-a-lifetime memories.”

Kalitta’s support will help A Kid Again further its mission of giving families the opportunity to take a time out from illness by attending ongoing Adventures together at NHRA races while they work through significant medical situations.

With the goal of providing year-round fun-filled Adventures that allow children with life-threatening conditions and their families to feel like “a kid again,” the organization works to create a communal and interactive environment offering comprehensive resources to help families cope with the extended effects of living through difficult medical journeys.  As a growing national organization, A Kid Again recently launched its newest chapter in Central Carolinas. Camden was one of the first to enroll in the new A Kid Again - Central Carolinas chapter and the chapter continues to expand its impact across the Carolinas and throughout the country.