Kalitta Motorsports has announced its driver, sponsor, and crew lineup for the 2021 NHRA Camping World Drag Racing Series. The multitime world championship-winning organization will represent a host of international and national businesses with a three-car team that includes the Top Fuel dragsters driven by Doug Kalitta and Shawn Langdon and the Toyota Camry Funny Car driven by J.R. Todd.

“We feel like we have three of the best drivers on the tour representing Kalitta Motorsports and our sponsors,” said Kalitta Motorsports General Manager Chad Head. “They are all proven winners at the highest levels. We have world champions and winners of the most prestigious races on the NHRA Camping World Drag Racing Series schedule. We are confident we will once again be in the championship hunt in both Top Fuel and Funny Car. Connie Kalitta has built these teams with the goal of being the best in their categories, and we have the right people leading each of them.” 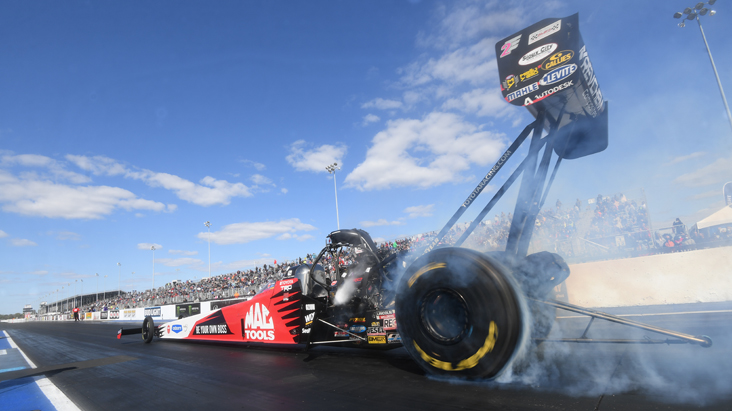 For the 20th season, Doug Kalitta will be representing Mac Tools as his primary sponsor. His team will once again be led by crew chiefs Rob Flynn and Troy Fasching. The past two seasons the Mac Tools team has entered the last day of the season with a chance to win their first Top Fuel world championship. This season they will be focused on doing everything to finish the season at the top of the class.

“We have come close the past two seasons and a handful of seasons before that,” said Doug Kalitta, 49-time Top Fuel national event winner. “Our focus doesn’t change from season to season. We take every race as an opportunity to win and represent Mac Tools along with all our other partners. The competition is extremely tough, but that is why we love what we do. I am looking forward to getting the season started in Gainesville.”

Joining Kalitta in the Top Fuel stable will be Langdon, who will be racing the DHL/Kalitta Air Top Fuel dragster for the second straight year. The 2013 NHRA Top Fuel world champion returned to Top Fuel last season after two years of racing in Funny Car, where he won twice and finished in the Top 10 both seasons. His team will again be led by drag racing legend and Kalitta Motorsports team owner Connie Kalitta and veteran tuner Kurt Elliott as one of the most aggressive crew chief combinations. Together the team won the prestigious NHRA U.S. Nationals last year.

“Our highlight last season for sure was winning the U.S. Nationals,” said Langdon, who has 15 Top Fuel wins to his credit. “I am looking forward to this season because I know I will be more comfortable in this DHL/Kalitta dragster. I love racing for Connie and Kurt, and every time I get into the race car, I know I have a shot at going low or getting a round-win. I have been preparing over the offseason and feel good about this season.”

The lone Funny Car representing Kalitta Motorsports will once again be driven by 2018 NHRA Funny Car champion Todd with crew chief direction coming from Todd Smith and Jon Oberhofer. The DHL Toyota Camry will be looking to the 2021 season to return to their winning ways. Last season, Todd raced to a number of final rounds and once again finished in the Top 10, but the team is looking for more success starting with the Gatornationals in March.

“Last year, we just didn’t find our groove, and we struggled for sure,” said Todd, a two-time U.S. Nationals Funny Car winner. “The one thing I love about this DHL team is we never gave up. Not every season is going to go your way, and I feel like we are a stronger team heading into 2021 because we had to work through so many issues last season. I have put in a lot of time at my gym, PitFit, getting into better shape, and I know Todd and Jon O. have been working with TRD to give us a chance for a great start. I am ready to get to testing and then on to the Gatornationals.”

All three Kalitta Motorsports teams will start the season with the PRO Winter Warmup test session in West Palm Beach, Fla., the weekend of March 5-7. The first race of the 2021 NHRA Camping World Drag Racing Series will be the Amalie Motor Oil NHRA Gatornationals at historic Gainesville Raceway.