The 2021 NHRA Camping World Drag Racing Series season kicked off unofficially at Gainesville Raceway with the first of two days of testing for competitors in Top Fuel, Funny Car, Pro Stock, Pro Stock Motorcycle, Pro Mod, Top Fuel Harley, and Factory Stock Showdown. On a gorgeous and nearly cloudless day, more than two dozen racers took advantage of the opportunity to try new parts, gather data on track conditions, or simply shake off some rust after a longer-than-usual offseason. Featured below is a class by class overview of the day’s activities.

There was not a lot of action among NHRA’s Top Fuel ranks on Tuesday, but that doesn’t mean there weren’t some noteworthy runs as Clay Millican, Doug Foley, and newcomer Josh Hart elected to take part in the first day of open testing. Millican did not take part in the preseason test last weekend in South Florida, so his Parts Plus team elected to make a couple of runs at Gainesville Raceway early in the week. In two planned early shutoff runs, Millican registered a best of 4.48, coasting to the finish line at just 169 mph. He also ran a 4.50, signifying, if nothing else, that he hasn’t lost his touch as a bracket racer.

Foley smoked the tires in his A&A Facility Solutions entry, but the driver who stole the show was Hart, who made the quickest pass of the day with a 3.811-second blast at 322.34 mph in his Ron Douglas-tuned Burnyzz/Technet dragster. On his first attempt, Hart had to shut off before he was even able to perform a burnout, but he quickly returned to make what figures to be a competitive run. 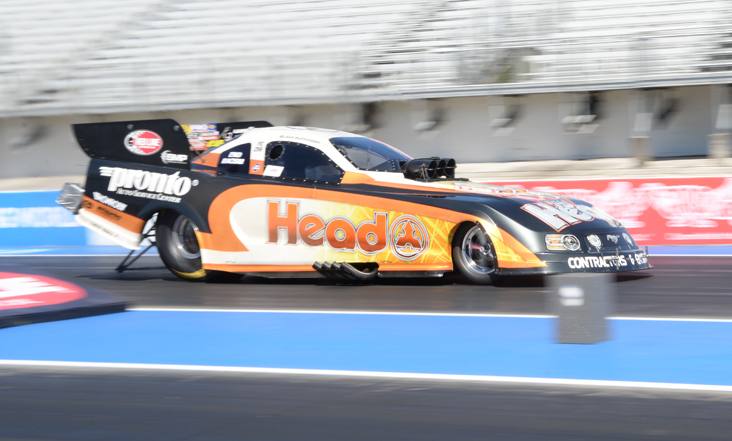 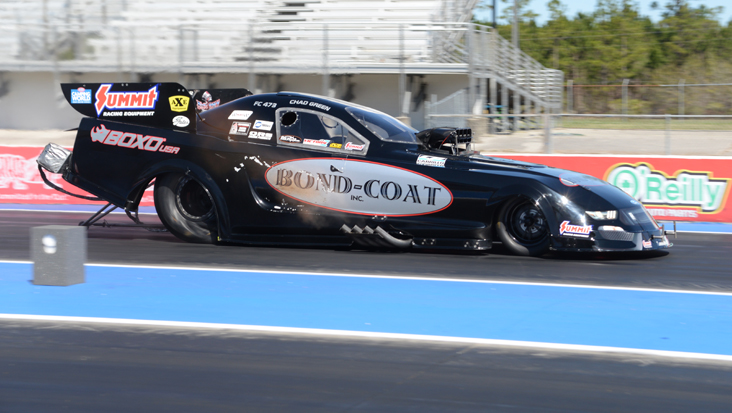 The first nitro car that runs during a test session almost always smokes the tires but not so with Chad Green and his Bond Coat entry. Green, who is also racing his nitrous Pro Mod this weekend, got off the starting line cleanly and made it to half-track before shutting off. As usual, Green ran under the watchful eye of Tim Wilkerson and his right-hand man, Richard Hartman. A second attempt later in the afternoon was not quite as successful as Green smoked the tires early and experienced a supercharger backfire that activated the parachute deployment system.

Of all the runs made on Tuesday in Gainesville, Cruz Pedregon’s 3.946 at 320.20 was easily one of the most impressive. Pedregon, who struggled for most of the 2020 season, made headlines during the offseason with the addition of veteran tuner John Collins and most of the team that was previously with driver Tommy Johnson Jr. Pedregon also recorded an early shutoff, 5.625 at only 123 mph.

Bob Tasca III made three runs on Tuesday in his Mike Neff-tuned Motorcraft Quicklane Ford Mustang with a best of 4.279, 218.16 while Blake Alexander wheeled Jim Head’s Pronto Mustang to runs of 4.28, 4.18, and a full throttle 4.020 at 319.98. Alexander noted that the team was searching to find some sort of consistency with their tune-up, and they appear to have found some. 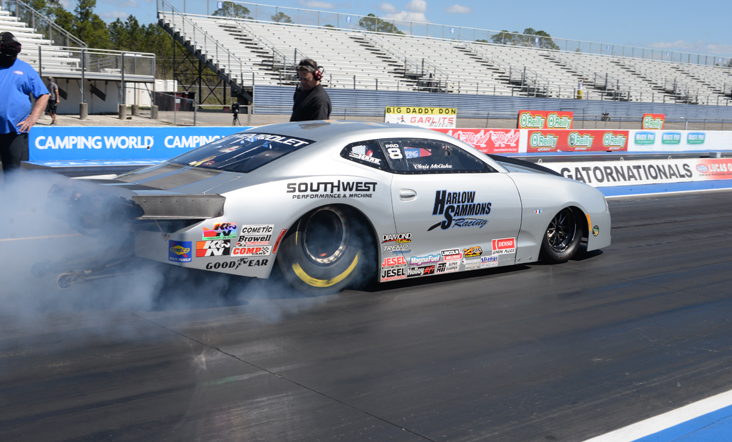 There will almost certainly be more on Wednesday, but the only two Pro Stock drivers to make runs on Tuesday was the father-son duo of Chris and Mason McGaha. Chris, who recently recovered from a tough bout with COVID-19, ran a best of 6.56. He also ran 6.58 and 6.60 in his Harlow Sammons Camaro. Mason eclipsed his father once again when he drove to a 6.550, 209.75 to make the quickest pass of the day. For what it’s worth, Mason’s run also came with a competitive .020 reaction time, signifying his readiness to start his sophomore season. 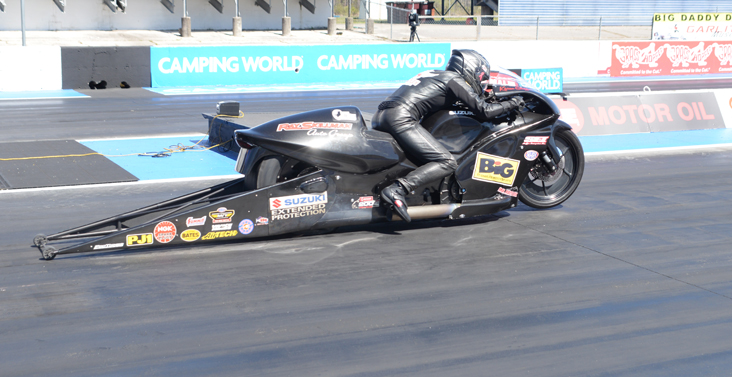 The offseason for Jianna Salinas was busy with an engagement and her first foray into team ownership. On the sidelines since her breakout win at the 2019 NHRA Finals in Pomona, Salinas was eager to get some seat time and used Tuesday’s laid-back test to make several runs, including a 6.98 and a 6.96 that highlighted her continued development in the class. Each of Salinas’ runs came under the watchful eye of her parents, Mike and Monica, and her crew chiefs, Gary Stoffer and Greg Underdahl.

Returning after a year layoff, Jimmy Underdahl made three consistent runs of 6.98, 6.94, and 6.92 aboard his Suzuki during Tuesday’s test day. Underdahl will be racing this year as a part of what was formerly the Stoffer/Underdahl team co-owned by his father, Greg, and Gary Stoffer. The team is now owned by Jianna Salinas. Underdahl is running the two-valve engine combination.

Coming off a season where he won a race and finished in the No. 7 spot, Ryan Oehler has high hopes for the new year, but his Tuesday debut was an adventure to say the least. Oehler did make a competitive run with a 6.86 on his Flyin’ Ryan EBR, but he also narrowly averted disaster on an earlier run when his bike caught fire. Oehler saw smoke coming up from the handlebars during the run so he closed the throttle. He used his glove to pat down what looked to be a small electrical fire. Seconds later, he was being sprayed with gasoline after a fuel line came off. As Oehler noted, “If I hadn’t put out the fire, we’d have had a big problem down there.” As it turned out, the damage was minimal.

Two-time Gatornationals winner Karen Stoffer didn’t race at all last year, but one would never have known it based on her performance on Tuesday. Stoffer, who is once again riding as part of Jerry Savoie’s White Alligator team, made the quickest Pro Stock Motorcycle pass of the day with a 6.831, 195.96. Stoffer also ran a 7.04 at just 157 mph on an early shutoff run. Stoffer’s Gainesville wins came in 2007, where she beat Matt Smith in the final, and in 2015, where she got the best of Eddie Krawiec.

Marc Ingwersen wheeled his Buckeye Harley-Davidson-backed EBR to a pair of solid runs on Tuesday, including a 7.08 and a 6.98, both at well over 190 mph. There are 21 Pro Stock Motorcycle pre-entered for the Gatornationals, so it very likely will take a six-second run just to make the 16-bike field. 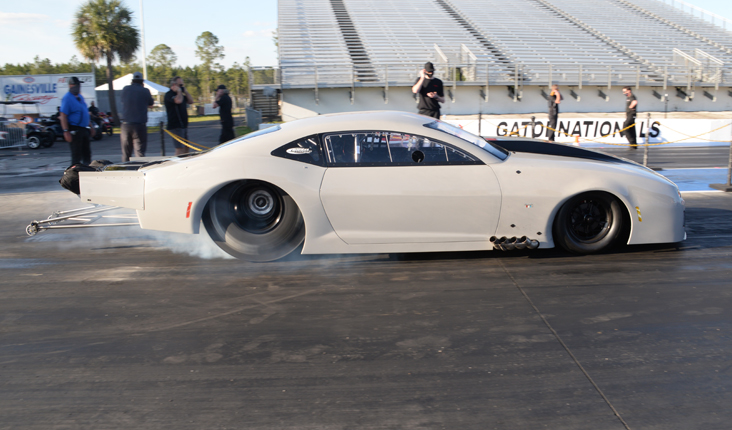 Reigning and two-time NHRA Pro Mod champion “Stevie Fast” Jackson probably doesn’t require much testing in order to be competitive, but since he did not drive in last weekend’s doorslammer event in Orlando, Fla., he figured he’d make a few runs in Gainesville. Jackson launched his supercharged Bahrain1 Camaro several times but never drove it to the finish line under power. Jackson’s best run was a 5.99 at only 182 mph.

Hands down the most active driver during the Tuesday Gainesville test was Luis De Leon, who was shaking down the show quality new ProCharger-equipped Camaro for regular driver Jose Gonzales, who is not due to arrive in Gainesville until later this weekend. De Leon made at least five attempts with the new combination, including a best of 5.983 at just 185.36 mph.

The former driver of the “Turbo Pig” is now wheeling a ProCharger-powered ’69 Camaro, and he limited his activity on Tuesday to a single shutoff run. The Pro Mod field for this weekend’s season opener is stacked with 26 cars on the pre-entry list, making it one of the biggest classes in Gainesville. The other Pro Mod drivers who made runs on Tuesday were former Top Sportsman champ Jeffrey Barker, Jim Whiteley, and Paul Daigrepont, who is making his NHRA debut this weekend. 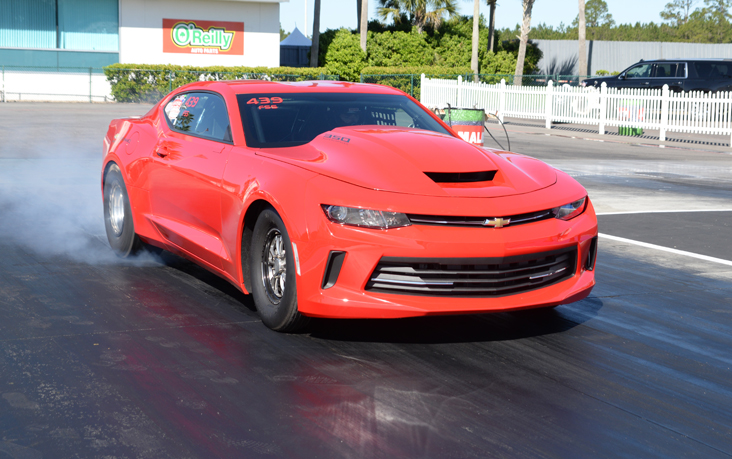 The first car down the track this morning was Stephen Bell’s COPO Camaro, which is being driven on Tuesday by reigning Factory Stock Showdown champion Aaron Stanfield, and he posts a very competitive 7.73 at 174.30 mph. Stanfield quickly returned to make two more runs before anyone else. The first resulted in a towering wheelstand and an early shutoff while the final run resulted in tire spin. Stanfield quickly backed up, made a quick rpm adjustment, and re-staged but blew the tires off a second time, a perfect illustration of the difficulty associated with getting 1,400 hp to the track on a nine-inch wide rear tire. The Gainesville Factory Stock field has 30 entries competing for just 16 available qualifying spots, which puts a premium on each run.

Puerto Rico’s Waldemar Rodriguez got to race just three times during the pandemic-shortened 2020 season, so he’s got a bit of catching up to do with his COPO Camaro entry. In two attempts on Tuesday, he ran 7.85 and 7.88, both at well over 170 mph. A bit off the pace set by Stanfield, but a competitive effort nonetheless. Rodriguez’s best finish last season came at the Denso Spark Plugs NHRA U.S. Nationals, where he reached the quarterfinal round.

Another Factory Stock driver who is getting back in the swing after a shortened season is Massachusetts-based Charlie Malo, who also wheels a COPO Camaro. Malo shut off early during Tuesday’s test, registering an 8.239 at just 167.22 mph. Malo made several other attempts, all of which resulted in early shutoff runs.

The other member of the Stanfield team that tested on Tuesday is past national event winner Arthur Kohn, who wheeled his AK Racing COPO Camaro to a best of 7.87 at 175.05 mph. Kohn is coming off a season that included multiple quarterfinal finishes to go with a semifinal at his home event in Houston. He carries the No. 5 on his window to signify his fifth-place finish last season. 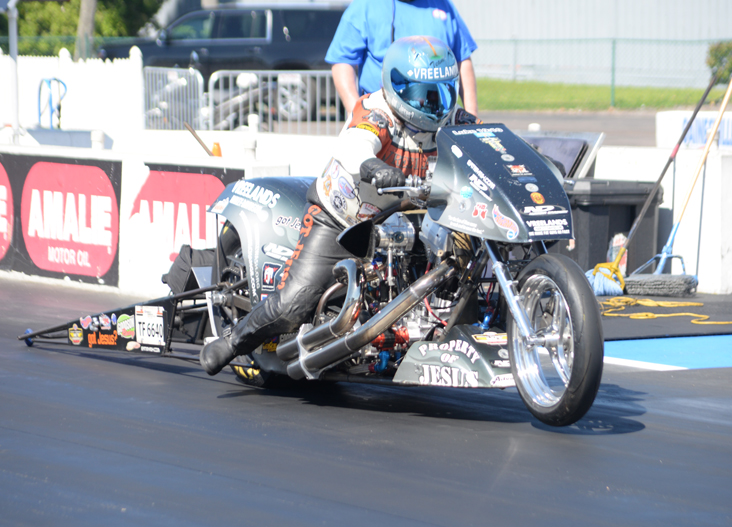 The Top Fuel Harley class is also making its first appearance of the season in Gainesville, and Richard Vreeland used the opportunity to make a few runs on his V-Twin nitro burner. Vreeland, who ran four events last season and finished No. 9 in the standings, produced a best of 6.800, 188.89 on an early shutoff run. 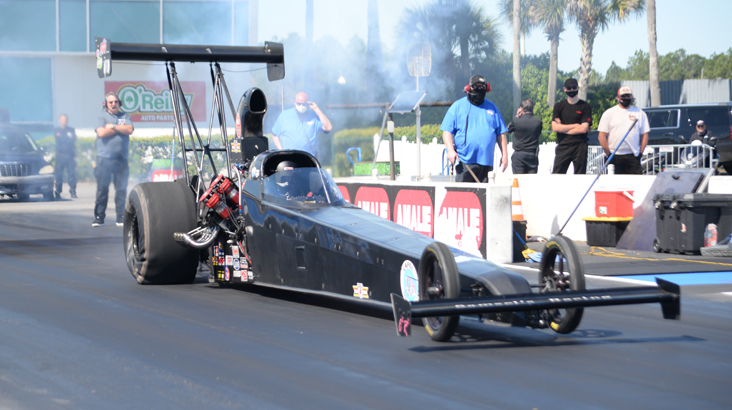 The Tuesday test was also open to Alcohol racers and those who took part included Jianna Salinas, Robin Samsel, Will Smith, and Aaron Cooper, the son of longtime Midwest Alcohol racer Gary Cooper. The lone Top Alcohol Funny Car to make it down Gainesville Raceway belonged to Robert Pfiester. The battle for low elapsed time among the dragsters was narrowly won by Salinas, who recorded her career-best run with a 5.168, 273.05 in her Scrappers dragster, which is now tuned by the McPhillips family. Salinas also ran 5.225 on a later run. Samsel also made the best run of his long career with a 5.17 at 280.66 for top speed of the day among Alcohol racers.